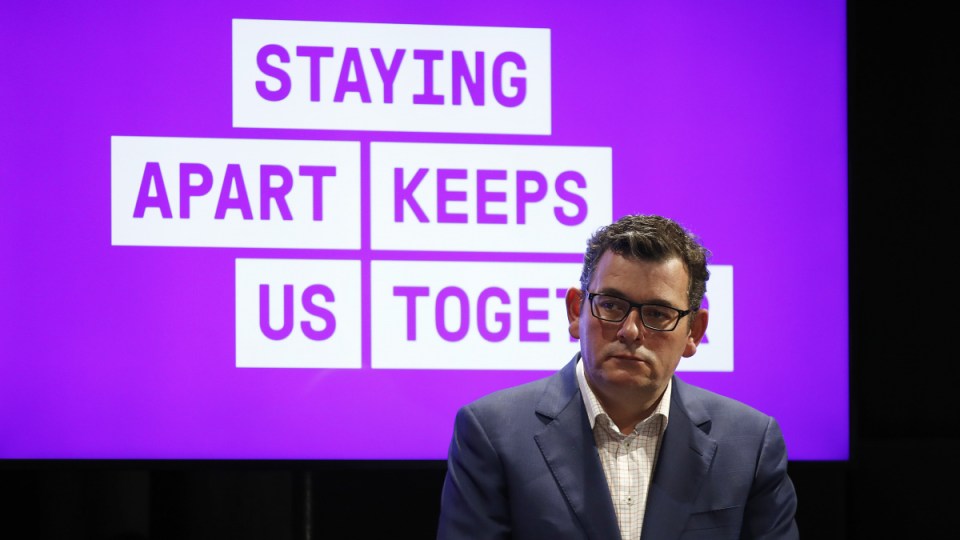 Premier Daniel Andrews is "hopeful" but not committing to changes this weekend. Photo: Getty

Email
Melbourne’s prospects of a return to more post-COVID freedoms hangs in the balance, with authorities desperately trying to stamp out an outbreak in the city’s north.

As the cluster grew further on Thursday, Victorian Premier Daniel Andrews would say only that he was “hopeful” he could go ahead with an announcement of eased virus restrictions planned for Sunday.

“Frustratingly, again I can’t predict what the numbers will be tomorrow or the day after. But once we have got those and we make final touches and final refinements to what is possible and what is deemed safe, then we will have more to say on Sunday,” he said.

“There will need to be a few days as we ease into that but we’re still hopeful.”

Health authorities have launched a testing blitz across Melbourne’s north, while thousands of residents in multiple suburbs have been told to closely monitor for symptoms after the cluster emerged in recent days.

It came as Victoria confirmed five new coronavirus cases on Thursday. Melbourne’s key 14-day average has fallen to 6.1, closer again to the original target of five.

All of Thursday’s cases were linked to the outbreak in the city’s north, which has 16 active infections.

Mr Andrews said the outbreak was being treated with an “abundance of caution”, with hundreds of people forced to self-isolate while awaiting test results.

“That is not pleasant, but that approach means that for hundreds of thousands, indeed millions more, there will be a hopefully greater degree of movement following announcements we will hopefully make on Sunday,” he said.

Federal government keeps the pressure up

The Victorian government has been under mounting pressure to take faster steps out of lockdown, with the federal government frequently comparing its case numbers those in NSW – which is mostly open.

On Thursday, Health Minister Greg Hunt further turned up the pressure. He urged Victoria to take a similar approach to NSW, again stressing the importance of freedoms for improved mental health and employment prospects.

“Its rolling case average is now below seven cases a day for 14 days, and below three for the three-day average. So, now is the moment where we can safely take steps”, Mr Hunt said.

“Ultimately that’s what we’re looking for from Victoria – to allow people to have contact with their families, their friends, their neighbours, in a COVID-safe way. And Victoria has got a strong base to make those changes.”

Also on Thursday, Victoria Police Assistant Commissioner Luke Cornelius warned anti-lockdown protesters who plan to attend another rally at the Shrine of Remembrance on Friday will face hefty fines.

Mr Cornelius said the RSL and Shrine management had made it clear that any protest at the Melbourne landmark was disrespectful to the memory of those who had served Australia.

He said the Shrine legislation covered behaviour and how people were dressed, while anyone who refuses to obey police could be fined about $300.

“Here we are, still in Stage 4 lockdown, and we have a bunch of people who are thinking it’s a good idea to rock up to the Shrine and espouse their particular views,” Mr Cornelius said.

Police have also confirmed they will deploy drones to monitor crowds at parks, beaches and other popular spots during the Melbourne long weekend.

A diplomat returning from overseas has become the first confirmed case of coronavirus recorded in Canberra for more than 100 days.

He tested positive to the virus while in quarantine.

“Therefore we believe this is an overseas-acquired infection,” Dr Coleman said.

ACT health officials are tracing the man’s contacts. But Dr Coleman said the risk of other Canberrans having been exposed was low.

State Health Minister Steven Miles said all the ship’s crew had been tested, but it had not yet been decided whether the positive cases would be evacuated to shore.