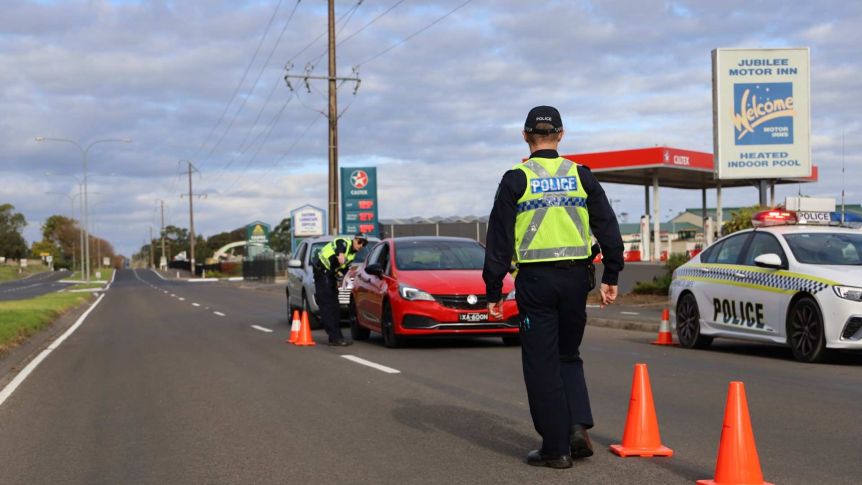 Police speak to drivers at a border checkpoint at Mount Gambier. Photo: ABC

South Australia’s border “buffer zone” with Victoria will extend from 40 kilometres to 70 kilometres under an easing of coronavirus restrictions announced on Tuesday.

The change will come into effect from midnight on Wednesday night.

Premier Steven Marshall said he was happy with how South Australians responded to eased restrictions at the weekend, which allowed people to drink standing up outdoors at licensed venues.

He said that had given the state’s transition committee confidence to consider further changes.

“The first of those is to change the buffer zone on the South Australian-Victoria border from 40 kilometres to 70 kilometres,” he said.

“This will come into effect as of midnight tomorrow night, so for those people who are coming in from Thursday morning onwards.”

Travellers from other states, including NSW, will also be able to come into South Australia via Mildura, as long as they are in Victoria only in transit.

This would avoid the longer drive through Broken Hill.

“A lot of people have made the very common sense suggestion that we provide this relief and it has been taken up by the transition committee,” Mr Marshall said.

“Currently, it’s once per week – there is some suggestion of once a fortnight – we’re trying to get national consistency; we’ll hopefully have some advice on that in the coming weeks,” he said.

The state government is also reviewing the crowd size allowed at AFL games at Adelaide Oval, but will announce any changes closer to the preliminary final next week.