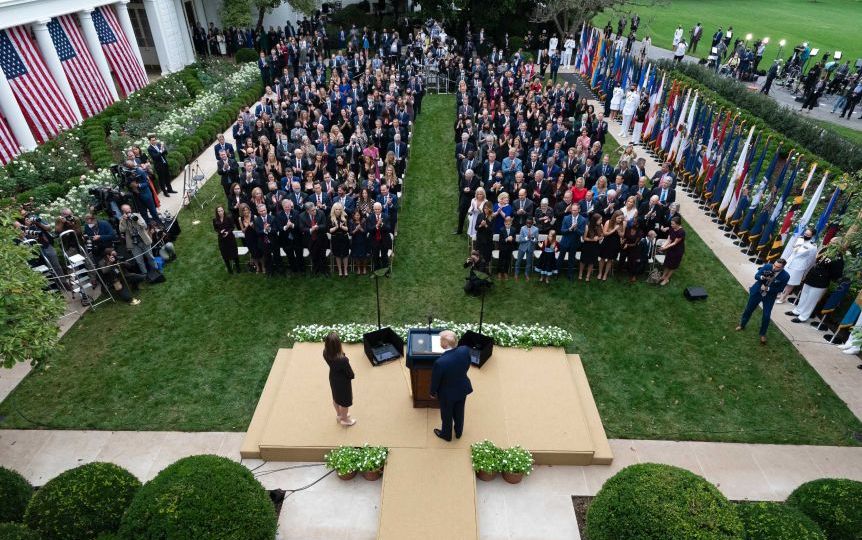 Seven days ago, US President Donald Trump held a ceremony in the White House Rose Garden to name his nominee for the US Supreme Court vacancy.

A week later, with the world scrambling to make sense of the US President testing positive for coronavirus, the event has come under a new spotlight.

US media has questioned whether it could have been a ‘super spreader’ event.

Here’s what we know.

What and when was the ceremony?

The ceremony was held for Mr Trump to formally announce Amy Coney Barrett as his nomination to the Supreme Court to fill Ruth Bader Ginsburg’s seat.

It was held last Saturday on September 26 (local time) and was attended by 150 guests including Barrett’s family, senators and White House staffers.

Guests moved to a reception indoors after the ceremony, held in the White House’s Diplomatic Room and Cabinet Room.

What were the coronavirus safety rules?

Ceremony guests were tested for coronavirus before attending.

Because everyone who attended had tested negative, they were told they no longer needed to wear a mask, according to the Washington Post.

Seated guests were not socially distanced and reporters and photographers were grouped together in what one journalist described to the Washington Post as a pen-like enclosure.

Which guests have tested positive?

Lee of Arizona and Thom Tillis of North Carolina, and University of Notre Dame president John Jenkins all attended the ceremony and tested positive to coronavirus on Friday.

Hope Hicks, one of Mr Trump’s closest aides, tested positive on Thursday after days of travelling around the country with Trump aboard Air Force One.

She did not attend the Rose Garden ceremony.

One of the journalists began displaying symptoms on Wednesday after covering the Rose Garden ceremony and riding in the press pool van that followed Trump when he played golf the following day.

A second journalist tested positive twice on Friday after attending a White House briefing on Sunday.

One journalist who was at the Rose Garden ceremony told the Washington Post the press pack was confined to a small space behind the guests and were in close proximity with each other.

The journalists said almost none of the guests wore masks.

Barrett has tested negative since the ceremony, the White House said.

It was confirmed she had a mild case of COVID-19 earlier this year but has recovered.

Vice-President Mike Pence, who was also at the ceremony, has tested negative to the virus and says he plans on resuming his scheduled campaign events.

Where did Trump go after the ceremony?

In the seven days between the ceremony and Mr Trump’s diagnosis, the President, Hicks, Pence and White House aides travelled around the country.

On the day of the ceremony, Mr Trump held a rally in Pennsylvania attended by thousands of supporters, many not wearing masks.

The following day he visited his golf course in Virginia and held a news conference in the White House briefing room.

On Monday, Mr Trump surveyed a truck on the White House South Lawn with two members of Congress and three representatives from the Ohio manufacturer.

The President then held another Rose Garden event, this time to announce the distribution of millions of coronavirus test kits to states, with Pence, members of Congress and state officials.

The candidates did not wear masks but were several metres apart and did not shake hands.

Mr Trump’s children who attended the debate did not wear masks, which was against the rules.

Do we know Trump caught the virus at the ceremony?

Right now it’s difficult to tell where Mr Trump got the virus. Given the highly variable period between infection and sickness — anywhere from a few days to two weeks — he could have contracted it on any number of occasions from a variety of people.

It could have been in a debate preparation session, where four of the eight people in the room have now tested positive.

We know Ms Hicks began feeling unwell on Wednesday and isolated herself aboard Air Force One.

But this was after travelling with Mr Trump and other staffers for days.

The White House Medical Unit is expected to trace the president’s contacts to find out where the infection came from in the coming days.

The World Health Organization says the time between exposure to COVID-19 and symptoms developing is “commonly around five to six days but can range from 1-14 days.”

Some attendees at the event flew into Washington DC from across the United States, and then back to their home states, potentially exposing others to the virus.

Senators at the weekend event who have since tested positive also spent the week in meetings with other congressmen and women who weren’t at the event.

Given what’s known about the time it takes COVID-19 symptoms to appear, the number of people at the event who have since tested positive, and the potential risk for those at the event to spread the virus further, the Rose Garden event is being closely examined.