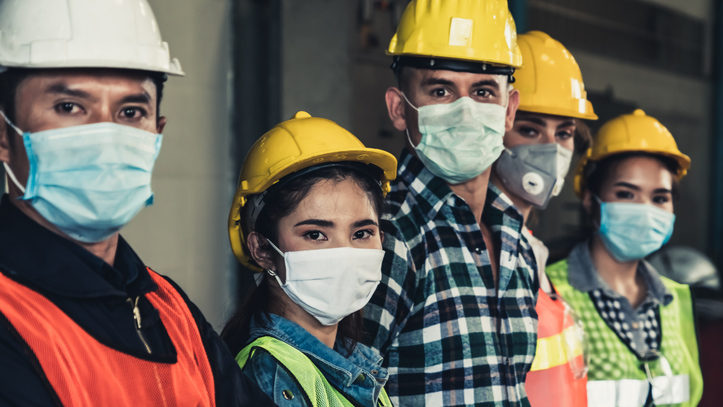 Employers will be encouraged to take on new apprentices under a $1 billion wage subsidy program to be announced in the federal budget.

The scheme would support 100,000 new apprentices and trainees amid an explosion in young people out of work and struggling to get a foot in the door.

The federal government would subside 50 per cent of wages in an incentive to employers to take on new young workers.

The measure follows the Morrison government’s existing $1.5 billion program which props up the wages of apprentices who were already in training by July 1.

However the new spending to be announced in Tuesday’s budget may not be enough to make up for the decline in funding for vocational education and training under the Coalition.

Police are remaining vigilant at Melbourne’s beaches after a furious premier slammed “selfish” residents not wearing masks and failing to maintain social distance.

Patrols will continue at St Kilda Beach after large groups flouted restrictions on Friday, raising concerns that such behaviour could thwart the state’s COVID-19 recovery.

“No one has the right to break the rules and potentially put at risk everything that good, decent law-abiding Victorians have created, have built,” Victorian Premier Daniel Andrews said on Saturday.

“All of their sacrifice has to be worth something.”

“Spending time at the beach without a mask, without social distancing now will just mean that you won’t get to go to the beach for all of summer. It just doesn’t make any sense.”

Both men have repeatedly urged the Melbourne population to remain disciplined, especially as warm, spring weather tempts people out of their homes.

Victoria’s daily case average continues to trend down, with the two-week rolling daily average at 12 cases.

The state reported three more COVID-19 deaths and eight more cases on Saturday, taking the state toll to 805 and national death count to 893.

There have been 11 cases with an unknown source in the fortnight to Wednesday.

A cluster of cases at The Butcher Club inside southeast Melbourne’s Chadstone Shopping Centre has grown to 17.

The premier has challenged Victorians to consider the potential impact of a cluster in such a large, busy setting and used it to illustrate why restrictions cannot yet ease.

A significant easing of restrictions may occur on October 19, but authorities are looking for the daily case average to drop to five.

Police continue to nab people who refuse to obey health directions, issuing 82 fines in the 24 hours to Saturday.

Recent breaches include two men from regional Victoria on their way to Melbourne to attend a strip club, only to realise no such premises were open.

NSW will be looking to extend its streak of days with no community transmission of COVID-19 to nine on Sunday.

There were 10,334 tests recorded in the 24 hours to 8pm on Friday with just one positive – a returned traveller in hotel quarantine.

However the potential exposure of almost 50 people who shared a flight to Sydney with an infected Victorian traveller could soon bring an end to the streak.

The potentially infectious passenger travelled on Jetstar Flight JQ510, which left Melbourne at 11am last Sunday and tested positive on their second day in quarantine.

Despite NSW’s streak of zero community transmission, the border between Queensland and NSW won’t reopen until November 1.

Queensland Premier Annastacia Palaszczuk says the hard border will lift the day after Queenslanders head to the polls, provided NSW has no mystery cases of COVID-19 in the preceding 28 days.

The announcement follows months of tension between Ms Palaszczuk and NSW Premier Gladys Berejiklian over the issue.