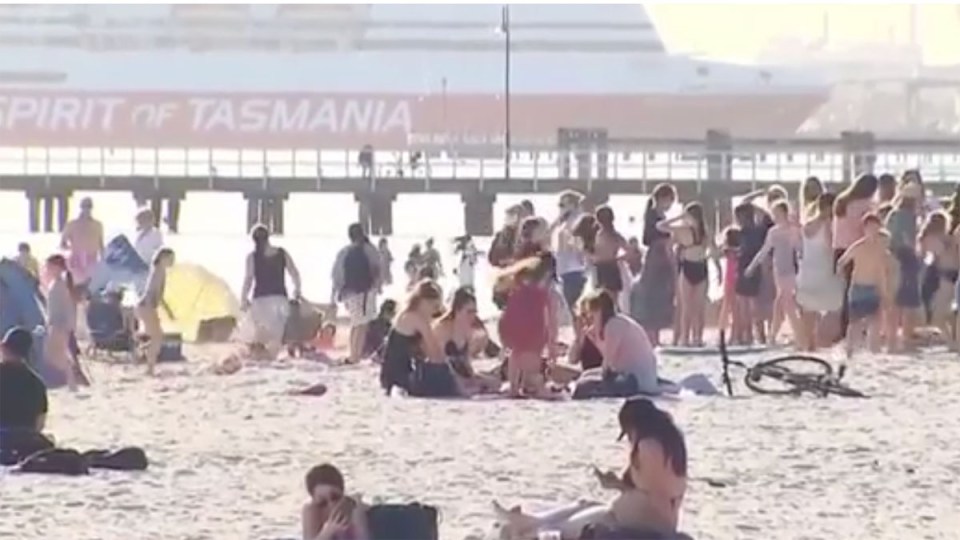 Victoria’s Chief Health Officer has urged locked-down Melburnians to “hold the line” ahead of a warm weekend after throngs of revellers flocked to beaches and parks on Friday.

A maskless horde was filmed on the TV news, not social distancing and gathering in a huge group in the afternoon sunshine at St Kilda beach.

Police issued several fines and warned patrols would be stepped up over the weekend.

“What we can hold back now means a truly normal summer. Please – Hold. The. Line.” he tweeted.

The footage aired on Seven News showed reporter Paul Dowsley surrounded by young revellers as he outlined to viewers the COVID restrictions that are still in place.

As he spoke, the crowd cheered and danced, while one person planted a kiss on the journalist’s head and a female kissed the camera.

Don’t risk everything. What we can hold back now means a truly normal summer. Please – Hold. The. Line. https://t.co/4nFM5EypBM

Melbourne’s current restrictions allow exercise or socialising outdoors for up to two hours a day with members of the same household or up to five people outdoors from a maximum of two households.

Social distancing of at least 1.5 metres distance remains in place.

Police have warned they will issue on-the-spot fines of $1652 for breaching social distancing and fines of $200 for not wearing a mask as the Victorian premier earlier called for vigilance as the weather heats up.

“As the weather starts to warm up, we know this is a time when many people would normally like to be out and about but it is important that if you choose to leave your home you continue to adhere to the directions of the Chief Health Officer,” Victoria Police said in a statement.

“A number of fines were issued to people who breached directions at St Kilda beach on Friday and Victoria Police will be conducting increased patrols of popular public spaces this weekend.”

Victoria’s new virus cases have recently tumbled back into single figures, with just seven confirmed on Friday, but Premier Daniel Andrews and the state’s health officials have repeatedly warned against complacency.

The slump in new cases came amid concerns about an expanding cluster linked to Melbourne’s biggest shopping centre, Chadstone.

This is the first Friday night in a long time Melburnians could meet up. We did. In small groups, but in large numbers. #picnicseason pic.twitter.com/6z7rWKVRoD

A household of up to nine people linked to the cluster is among those in isolation as authorities try to keep a lid on the virus’ spread.

Victorian acting deputy chief health officer Allen Cheng described the outbreak as “a bit of a situation” but said Chadstone had been deep-cleaned and relevant staff contact traced.

AstraZeneca has restarted clinical trials of its experimental COVID-19 vaccine, which Australia’s Prime Minister Scott Morrison has pinned his hopes on.

The pharma outfit says clinical trials of its experimental COVID-19 vaccine have resumed in Japan, while adding that it was in talks with regulators on data needed to restart studies in the United States, where they remain halted.

Several global trials of the vaccine, AZD1222, were put on hold last month after an unexplained illness in a study participant.

While most trials have resumed, US trials are still on pause as regulators widened their probe, Reuters reported on Wednesday.

The British drugmaker said the early-to-mid-stage trial for the vaccine candidate against the coronavirus resumed in Japan after consultations with the national health regulator, the Japanese Pharmaceuticals and Medical Devices Agency.

Trials in the UK, Brazil, South Africa and India had already restarted.