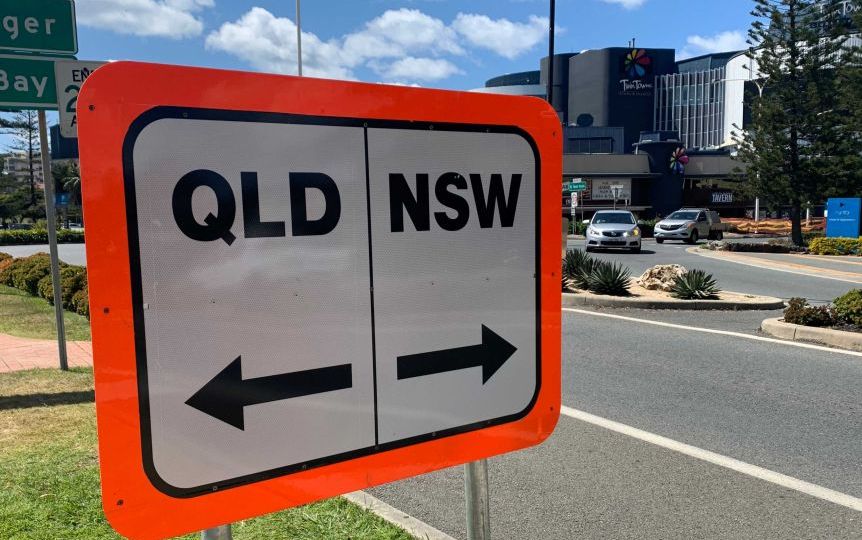 Travellers from regional NSW are allowed to enter Queensland again as of Tuesday. Photo: ABC

Queensland police say the online border declaration pass is malfunctioning for some border zone residents attempting to enter the state.

It comes just hours after Queensland eased border restrictions to allow residents in areas of northern NSW to enter the state without undergoing quarantine.

Gold Coast Police Chief Superintendent Mark Wheeler confirmed locals in some of the newly added northern NSW areas were not being recognised by the system.

“It’s been a mammoth task by housing and public works.

“All Queensland postcodes for the entire state have had to be loaded into the system, so understandably there’s a lot of stress on the system but they’re working through it.”

Police said Queensland residents intending on travelling within the NSW border zone and re-entering Queensland, would need to apply for the updated X pass, also known as a “border zone resident declaration pass”.

Chief Superintendent Wheeler said efforts were being made to fix the glitch.

Police said anyone affected could show proof of their address at the border and would be able to apply for a pass in person.

It comes as police reinforcements have been called in to cope with long delays expected at the border, as hundreds of NSW families head north.

From 1am Thursday, the tough border restrictions to 41 postcodes were lifted.

It means the roughly 152,000 people who live in those areas can “freely” pop across the border for a break.

Travellers would still need a border pass to get into the Sunshine State and a lot of patience after the withdrawal of Australian Defence Force personnel who had been helping with border checks.

Queensland Police Minister Mark Ryan pleaded for families to remain tolerant and calm as police checked each car one by one.

“You can have 100 police on the border and it won’t necessarily speed things up,” he said.

“Because what we do is get the traffic flow down to one lane.

“There is a certain capacity of cars you can process at any one time.

“The thing that causes the delays is the volume of traffic coming through and as the border bubble expands there will be more and more people.”

He said there was good reason for people to be patient as “patience is keeping COVID out of Queensland”.

Anyone from northern NSW who has not been to a COVID-19 hot spot in the past 14 days can enter without going into quarantine.

Can Queenslanders head to NSW and get back in easily?

If Byron Bay has been on your holiday wish list since the pandemic began, you can now head south without any hassles.

Five more council areas have been added to the border bubble including;

The rest of NSW is still listed as a hot spot.

Queenslanders also need to fill out a border declaration pass to get back home.

Queensland Premier Annastacia Palaszczuk said it was a good day for local economies on both sides of the border.

She hoped the long delays would be “smoothed out” soon and “we will see freer movement of people”.

But authorities been vigilantly keeping an eye on what’s been flushed down toilets in a bid to track the virus.

“We know that one person in 10,000 in the community can be picked up through sewerage testing, so it is very sensitive,” she said.

“Tests along the border have not found any trace since a Byron Bay outbreak [more than a month ago] so there is no virus in sewerage there.

“So there are a whole lot of reasons we can now safely open up to northern NSW.”

Jail threat for those who breach border rules

Police Minister Mark Ryan warned there were big fines and a six-month jail term for anyone caught lying on their border declaration.

The biggest fear he said was people lying about being in hot spots.

“There is also follow up activity too, so if people think they can lie on a border pass and get away with it that is not the case.”

Police Commissioner Katarina Carroll said there was also a growing number of people “dobbing” in others in for doing the wrong thing.

A boost for tourism

Tourism operators have been slowly clawing back the millions of dollars lost during the pandemic with Queensland’s “Good to Go” campaign.

“We do know from major online distributors and travel agencies online, they have reported spikes in increases in destinations from NSW people,” he said.

“Inquiries have doubled or even trebled for some places around Queensland, so that expresses the mood of consumers that they are really ready to travel again.

“And it is a good reminder that the Sunshine State is open for business.”

He said with the good work authorities from both states had both done to control the virus outbreak and the robust measures in place to track any possible infections, it was time to open to the Queensland border to all of NSW “without further delay”.

A review of border restrictions is conducted at the end of every month.