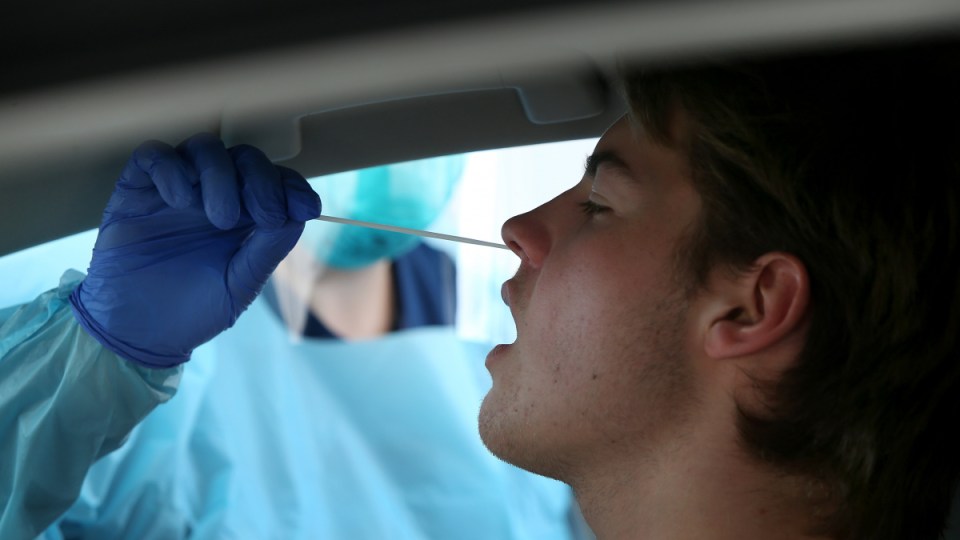 The number of people getting tested for the virus continues to fall across Australia. Photo: Getty

Workers in high-risk industries in Victoria will be tested randomly for the coronavirus amid growing fears among Australia’s health authorities that not enough people are fronting for tests.

Premier Daniel Andrews said 25 per cent of workers at medium and large meat, poultry, seafood processing businesses and staff from supermarkets and distribution centres would be tested each week as Victoria continued to reopen after its deadly second wave.

There will also be more testing in aged care after a deal was struck with the federal government.

Mr Andrews said on Wednesday about 50 per cent of workers at metropolitan Melbourne aged care facilities and 25 per cent in regional Victoria would be tested weekly.

Workers will not be required to self-isolate unless they get a positive result.

He said the state government would work with employers to make the boosted testing regime work. But workplaces would also have to stay vigilant so they could remain open.

They were women in their 70s and 80s and a man and a woman in their 90s. Two were linked to outbreaks in Victorian aged care facilities.

Wednesday’s figures came after 17,937 people were tested for the virus on Tuesday – a welcome jump after a run of days with fewer than 10,000 tests.

“That is a very strong number,” Mr Andrews said.

There have also been concerns in about testing numbers in NSW, which continued its run of zero community infections on Wednesday. Only about 6300 people were tested for the virus on Sunday and Monday, prompting a warning from Premier Gladys Berejiklian.

“We know the disease is lurking in the community, so I don’t want anyone to be surprised if tomorrow or the day after we do get cases of community transmissions,” she said.

“We’re doing exceptionally well at this point but we know the threat of the virus lurking in our community is a high likelihood.”

Tests rebounded to 13,500 in NSW for Wednesday. Infections and testing numbers often spike on Wednesdays, following a lull at the weekend.

But Australia’s chief nurse, Alison McMillan, has also urged people with respiratory symptoms to get tested for COVID and stay home until they get their results.

“If we want to get back somewhere near our normal life we all need to make the effort. If you’ve got symptoms, get tested for all of our sakes,” she said.

On Tuesday (Australian time), the number of people killed by the coronavirus globally topped a million. Professor McMillan described the milestone as a sombre and devastating human toll.

“That’s one million people out there – loved ones, family friends – not just a number,” she said in Canberra.

“Sadly, it’s not by any means the last of the milestones we’ll see in deaths in coming days, weeks and potentially years.

“That’s why it’s important we all need to stay vigilant.”

Back in Victoria, wastewater monitoring has again picked up the virus in testing at Anglesea, on the Surf Coast – despite the town having no active cases.

A testing site has opened at Anglesea Town Hall.

“We know there is either someone who has had coronavirus in the Anglesea area or someone who has passed through, but it may also be someone who is not yet aware that they have the virus,” Jeroen Weimar from the Department of Health and Human Services said.

He encouraged anyone in the area “who has any symptoms whatsoever, who feels remotely unwell” to get tested.

Of Wednesday’s new cases in Victoria, two are linked to a worker from the Butcher Club at Chadstone shopping centre in Melbourne’s south-east.

The worker was contagious between September 23-26, when they worked 6am-6pm shifts at the butcher and used public toilets in the vicinity.

Melbourne’s 14-day rolling average of cases has dropped to 16.4. It is on track to fall below five by October 19, the next likely date to wind back more virus rules.

However, the city still has 21 mystery cases from September 14-27. There must be fewer than five for a fortnight before the state eases restrictions further.

“We’re very close, we’ve got three weeks before we can open up in big steps,” Mr Andrews said.

“Whilst the trend is with us, that’s not low enough for us to take those really big steps.”

There are 44 Victorians fighting the virus in hospital. Six are in intensive care, including three on a ventilator.

NSW has 50 COVID patients, including three in ICU. None are on ventilators.

So far, 886 Australians have died in the pandemic, 798 of them in Victoria.