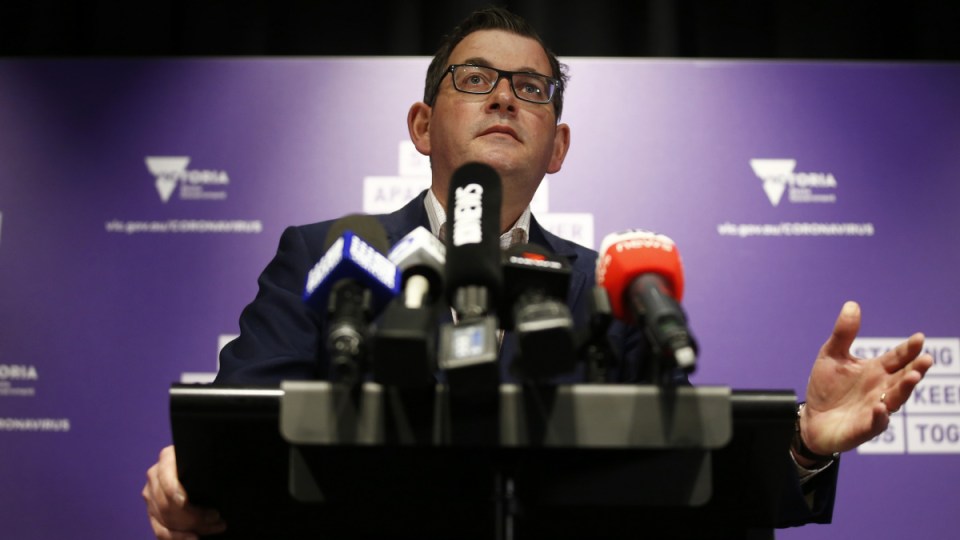 Daniel Andrews was due to announce changes on Sunday. Photo: AAP

Melbourne’s curfew will be lifted from Monday in the next stage of a plan to ease the nation’s toughest coronavirus rules.

As Victoria recorded 16 new COVID-19 cases and two more deaths on Sunday, Premier Daniel Andrews detailed how life under lockdown would change from 11.59pm Sunday, with what he called “safe and steady steps”.

“I am deeply grateful to the Victorian community for the amazing work, the sacrifice, the pain that they have enjoyed and will need to endure for a bit longer,” he said.

The Premier announced the 9pm curfew for Melbourne would be lifted from Monday morning, restrictions on some work industries – representing 127,000 workers – would be relaxed to allow on-site work.

In good news for parents still working from home, there are also plans to get students back into classrooms and also have more young kids in daycare.

Other rules to be changed include:

“That is more than what we had hoped to be able to achieve. It is not as much as people would want but it is very important that we
take those steps safely,” the Premier said.

Despite the changes to shopping rules, Mr Andrews asked people to still limit shopping to essential purchases only.

“That, I’m sure, will be great news for many families,” the Premier said.

Chief health officer Brett Sutton saying the 9pm curfew was “not a proportionate measure to have in place going forward”. However, Mr Andrews announced it would be replaced with a heavy new fine for illegal gatherings instead.

He said the fine, at almost $5000, would apply for unlawful indoor or outdoor gatherings, such as parties or people congregating in car parks.

Separately, face shields alone will no longer be allowed in place of face masks in Victoria. The rule will be enforced in two weeks time, allowing a “transition” period.

And here's a summary of what's changing in the Second Step: pic.twitter.com/HG0u1ciOt1

“Face shields don’t meet the test of covering your nose and mouth. You can wear one if you want, in terms of your eyes, but it would need to be accompanied by a mask… a shield is akin to not wearing a face covering,” Mr Andrews said.

“A shield is not as good as a shield and a face covering. It needs to be both. A shield alone does not work to the extent we would like.”

Mr Andrews flagged further changes may be considered after October 19, saying the state would need to wait at least three weeks before seeing the effects of Sunday’s changes on virus numbers.

Sunday’s long-awaited announcement had been contingent on the state recording between 30 and 50 virus cases, on average, over 14 days.

Under the Victorian lockdown ‘reopening roadmap’, the ‘first step’ could only be taken after September 28 and once that figure was hit.

#COVID19VicData: Yesterday there were 16 new cases & the loss of 2 lives reported. The 14 day rolling average is down & number of cases with unknown source stable as we move toward COVID Normal. Info: https://t.co/eTputEZdhs#COVID19Vic pic.twitter.com/hdGLBeWZST

The latest numbers show Victoria had smashed the target.

The daily average calculated over the fortnight was 22.1 in Melbourne as of Sunday.

In regional Victoria, the average had fallen to just 0.6.

Mr Andrews said he was “proud” of how Victoria had followed the rules of the state’s latest lockdowns.

“The fact that we are at 22.1 cases over that 14 day period as a rolling average means that this strategy is working. It is more than working,” he said.

“We are ahead of schedule, we have made more progress than we hoped to make at this point in time.”