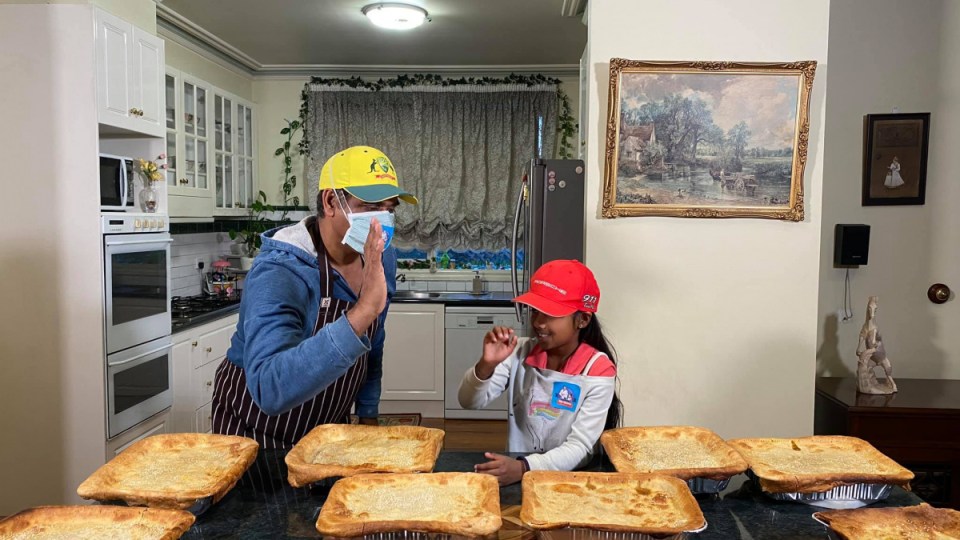 As bombs were falling outside the Al Rasheed Hotel in Baghdad, Daman Shrivastav took cover in the bomb-proof underground hideout where hundreds of journalists and diplomats also sheltered.

Explosions were occurring all through the dark of the night, Daman recalled. When the sun came out, he would return to the kitchen, leading a team of 120 cooks and 20 kitchen hands.

Everyone strapped on gas masks amid real fears a chemical attack could strike at any moment. Leaving the hotel to get supplies meant putting their life at risk, but it was so those who were sheltering inside could be fed.

That was during the first Gulf War. Now Daman is strapping on a medical-grade face mask and cooking hundreds of meals every week for people in Australia who cannot afford to buy their own food amid the pandemic.

Many are so cash-strapped, they’re only living off what he hands them. For one international student, it’s 10 burgers to survive three days.

With the help of his wife and daughter, Daman has prepared, cooked, and donated at least 3000 free meals since March.

Just like how COVID-19 has forced once-secure individuals to reach out for help, Daman has seen wealthy Iraqis who were served gold leaves in their food be reduced to rummaging through bins for something to eat.

At a time when the only safe place in Baghdad was the Al Rasheed Hotel – because it sheltered foreigners, the majority of whom were American  – Daman ventured dangerously to the underground shelters where local Iraqis were hiding during the war, just to give them any leftovers.

“I didn’t get scared. I just wanted to help,” he told The New Daily.

He couldn’t bear to watch locals try and sell their clothes, jewellery, watches, perfumes or whatever else they could muster, to earn quick cash for food.

The chef, who is originally from India and now lives in South Morang, on the outskirts of Melbourne, knows all too well what hunger feels like.

The youngest of four kids, his dad worked two jobs. There were many times when there was no food and Daman would have to go without. On a good day, he’d reach for a slice of bread and some ketchup.

After the war in Iraq was over, in February 1991, and citizens of other countries were being flown home, Daman stayed put. He used his birthday on June 15 to feed the people of Baghdad.

Committed to nourishing the multitudes, he went to see Mother Teresa who was there with a group of nuns opening a church.

He said: “Mother, with my birthday, please come. It’s like just raising some awareness and some food for the people.

“She said ‘son, I don’t attend any celebration’. And then I said ‘yes mother, I understand’. And she said ‘son, you come with me tomorrow’.”

The next day he accompanied Mother Teresa and the other nuns to the building they were trying to make into a church. With brooms in their hands, they began cleaning – an experience Daman said he will never forget.

Satisfying his own need for food became incredibly difficult when he left the country.

He could not exchange the Iraqi dinar to a different currency. So all the money he had earned while an executive chef was worth nothing.

Daman managed to catch a ride with an Afghan secretary who was heading to Syria. He was dropped off at the Intercontinental Hotel in Jordan, telling the secretary he had already booked a room.

But in actual fact, Daman had nothing but a one-dollar US note and a small backpack, having given away almost everything he owned to Iraqis who, he said, were more in need than he was.

Not wanting anyone – even his family – to know the dire circumstance he was facing, Daman found a phone booth and called his dad in India to tell him not to worry, that he was OK.

A stranger who overheard their conversation asked Daman: “Who are you? Where are you from?” After listening to his story, the man, who was a building contractor, offered him a place to stay, and Daman did some labouring work in exchange.

He said he was there in Jordan illegally. That made finding a suitable job all the more difficult. In the end, he was left with little choice but to work as a picker on an orange farm.

“The owner of the fruit farm, he was observing me. He said ‘you don’t look like a labourer. Who are you?'”

The farm owner happened to be related to Hussein bin Talal, the then-king of Jordan.

“He said ‘listen, somebody has come from Kuwait. He wants to open a French restaurant and he’s looking for someone who can help him out’.”

Daman ended up cooking a seven-course meal for food and beverage managers of hotels like Marriott, Intercontinental and Sheraton, to prove that he was telling the truth about himself.

Fast-track six months and Daman has opened up that restaurant they spoke about, which became so famous the King himself started eating there. “He liked my filet mignon so much.”

The monarch’s eldest son, Prince Abdullah, who is now Jordan’s king, ate regularly at the restaurant with his fiancee, Rania, who is now the Queen.

Daman eventually migrated to Australia, where he had to start again from scratch.

But needing to get re-qualified didn’t stop him becoming the executive chef at Rydges in Melbourne’s CBD, working alongside Gary Mehigan before he became a Masterchef judge.

As well as opening up his own fine dining restaurant, Daman has since started teaching culinary arts and hospitality at the Box Hill Institute, and created an online cooking show with his eight-year-old daughter, Diya, to help parents stuck at home teach their kids to cook.

Daman has also started a GoFundMe page to raise funds for a food truck that he hopes will enable him to make and deliver meals during the pandemic.

“Most of all, I want more people to know that I’m doing this so that they can get help from me.”

This chef survived a war and cooked for a king. Now he’s helping Aussies survive the pandemic