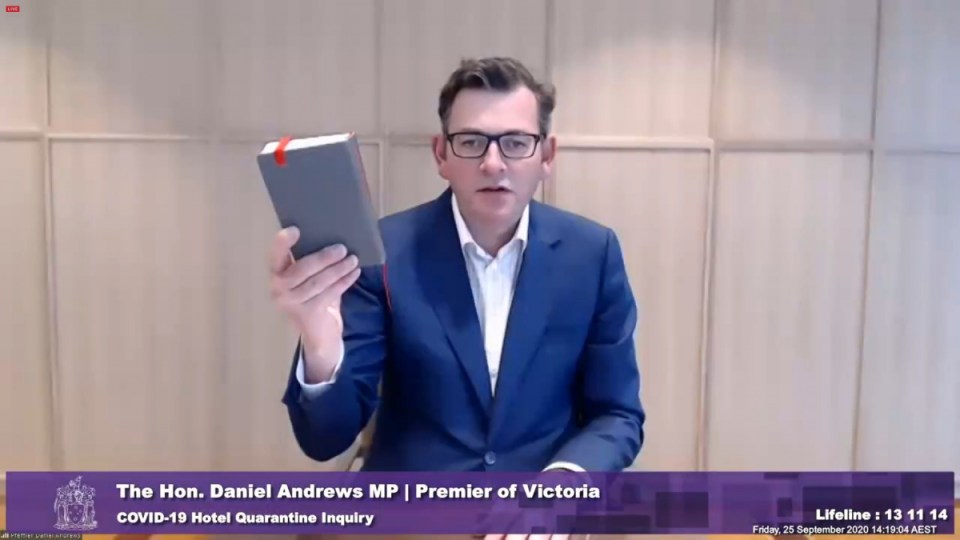 Daniel Andrews is sworn in to give evidence to the hotel inquiry on Friday afternoon. Photo: AAP

Premier Daniel Andrews has told Victoria’s hotel quarantine inquiry that he also does not know who decided to hire private security guards to oversee returned travellers.

“I do not know who made that decision,” Mr Andrews wrote in his submission to the inquiry on Friday.

“I expected that there would be a mix of different personnel playing different roles in the program, including members of Victoria Police.

“But the way in which that decision was to be implemented, including the mix of personnel that would be engaged and their respective roles, was an operational matter.”

Mr Andrews is the latest in a string of senior state government officials and ministers – including Health Minister Jenny Mikakos, Jobs Minister Martin Pakula and Police Minister Lisa Neville – to deny any part in the decision to use private security, rather than police or the Australian Defence Force.

Chief Commissioner of Victoria Police Shane Patton and his predecessor Graham Ashton, chief health officer Brett Sutton and senior public servants, have also pleaded ignorance in a decision that is one of the key elements of the inquiry.

The judicial inquiry has heard the decision was definitely made on March 27, the day national cabinet announced the hotel quarantine program.

Following national cabinet, the Premier held a 3pm press conference during which he said “police, private security, all of our health team will be able to monitor compliance in a much easier way” at hotels.

On Friday, he told the inquiry he was not certain why he mentioned private security then.

“I have tried to search my recall of this and I simply can’t,” Mr Andrews said.

Mr Andrews said the hotel quarantine program was an “appropriate response to a very significant risk”.

Mr Andrews is the final witness before the $3 million inquiry, headed by retired Judge Jennifer Coate.

Victoria’s second wave of coronavirus, which has caused more than 750 deaths, can be traced back to outbreaks at two Melbourne hotels used in the quarantine program.

The inquiry will hand down its final report on November 6.

Elsewhere, the Premier has given his strongest hint yet that Melbourne might leap forward on its scheduled reopening – but not until October.

“I do hope to be able to talk a little bit more about how I think October will unfold and maybe give people some clarity around – because we are ahead of schedule – what might be possible,” he said on Friday.

“Again, always subject to the case numbers. What might be possible in the next month, as we move towards that next trigger point, that may be able to occur sooner.”

Millions of Melburnians who have endured eight weeks of Stage 4 lockdown will find out on Sunday how the toughest rules will ease. But the Premier has dashed hopes of major changes, promising only “safe steps, not big steps”.

The city is well ahead of milestones set in the state government’s roadmap to reopen – for restrictions to ease from September 28, its 14-day new case average must be between 30-50.

“The roadmap never envisaged really significant steps at the 28th – but we are on track, the strategy is working,” Mr Andrews said.

Under the metropolitan Melbourne plan announced on September 6, proposed changes in the first step include a staged return to school and pubic gatherings of five people from two households.

The city will not move to its next step – which includes dropping its daily curfew and removing restrictions on staying within five kilometres of home – until October 26. That is the date that the Premier has hinted might change.

But he has refused to even hint at the changes that will be announced on Sunday, confirming only that Victoria is “well and truly” within the range necessary to move to its next step of COVID measures.

The changes are likely to include a return to work for some of the thousands of Melburnians whose workplaces have been shut since early August.

“We are certainly looking closely at those things and I want to get the high-risk workplaces for the highest level of activity but still keep them as safe as possible,” Mr Andrews said.

“That is the balance that has to be struck. I think we will be able to get there.”

NSW’s three-day streak of no locally acquired COVID-19 cases has ended, with a mystery infection reported on Thursday and included in Friday’s numbers.

NSW Health said the locally acquired case was a man in his 50s from south-west Sydney who had no contact with previously confirmed cases.

The mystery infection sparked a warning for anyone who attended Woolworths in Campbelltown Mall on September 17 between 1.30-2pm to monitor for COVID symptoms.

The man’s case was among four cases confirmed in NSW in the 24 hours to 8pm on Thursday. The others were returned travellers in hotel quarantine.

‘I do not know’: Premier’s private security guard denial