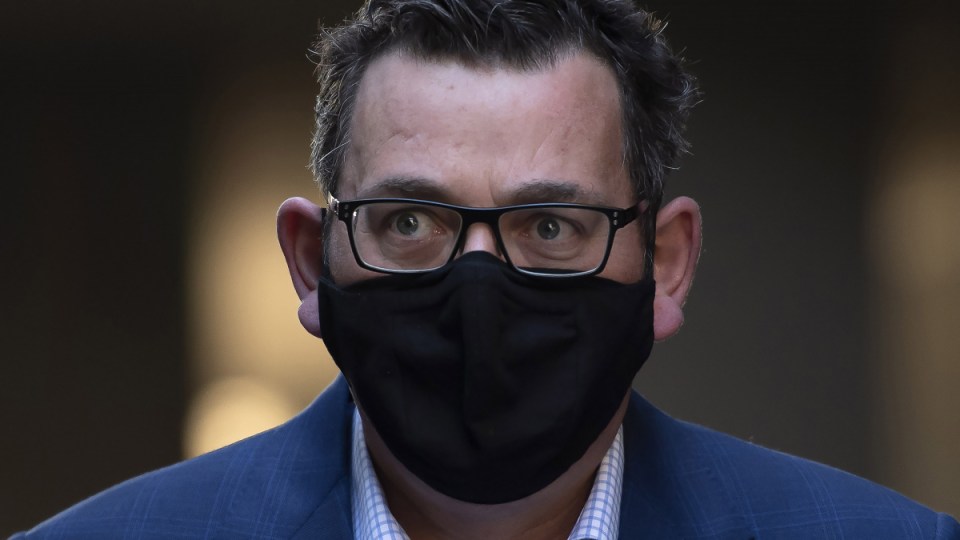 The Premier will be the final witness to front the hotel quarantine inquiry. Photo: AAP

Victorian Premier Daniel Andrews has again refused to answer questions about the state’s botched hotel quarantine, ahead of his much anticipated appearance at the inquiry into the program on Friday.

At his daily briefing on Friday, Mr Andrews came under sustained questioning about the program, and the failures that led to Victoria’s deadly second wave of the coronavirus.

But he dug in on his previous refusals to answer.

“I’m not going to canvas issues that I may well be directly asked about today, nor will I be drawing conclusions on evidence that has led to that inquiry,” he said.

“That is not my role, that is not respectful of the process that is going on at the moment.”

Mr Andrews will be the final witness at the probe into the hotel quarantine program, chaired by former judge Jennifer Coate. It will be the first time a sitting Victorian premier has fronted a high-powered inquiry into the actions of the state government.

Not one has been able to identify a crucial element of the bungled program – just who decided to use private security guards in quarantine hotels.

“What people knew, what they did and the degree to which that was right, wrong or indifferent, that is a matter that the board is actively examining today and every day until they produce a report, which will be an early November,” Mr Andrews said on Friday.

“I cannot and I will not pretend to be the chair of the inquiry. That is not why it was set up.”

The Premier also refused to hint at how Melbourne’s virus measures are likely to ease after Sunday.

The state had just 14 new COVID infections on Friday, its third consecutive day of fewer than 20 cases. They took Melbourne’s key benchmark 14-day average of new cases to 25.1.

The number of virus patients in Victorian hospitals has also dropped below 500 for the first time in months.

Mr Andrew again promised only “some safe steps, not big steps” for millions of Melburnians who have endured eight weeks of virus lockdown, even though the city is beating modelling predictions.

“I want to be very clear, the roadmap never envisaged really significant steps at the 28th, but we are on track,” he said.

“I do hope to be able to talk a little bit more about how I think October will unfold and maybe give people some clarity around – because we are ahead of schedule – what might be possible.”

After Sunday, Melbourne’s next significant date for easing virus rules remains October 26. That is when measures such as the daily curfew and the limit on travelling further than five kilometres from home are scheduled to be wound back.

But Mr Andrews hinted that date could be brought forward, if Melbourne’s COVID infections remained low.

“That may be able to occur sooner, but I will be in a better position to speak to that in some detail on Sunday,” he said.

Elsewhere, NSW’s run of days without locally acquired virus infections ended on Friday. It confirmed four more cases – three in returned travellers and one in a man in his 50s whose infection is under investigation.

His infection was announced by Premier Gladys Berejiklian on Thursday but included in Friday’s figures.

NSW is easing some virus rules as its overall case numbers drop.

It will allow up to 20 people in bridal parties to dance at weddings, extending permission from just the bride and groom. A range of school activities, including camps, excursions and formals, are also set to return from October.

Queensland has gone two weeks without the disease spreading through the community and now has only five active cases.

The state government is raising the limit on at-home gatherings in  Brisbane, Logan and Ipswich from 10 to 30. Visits to nursing homes and hospitals in the region will also restart.

Australia’s toll from the pandemic rose to 869 on Friday, with eight more deaths confirmed in Victoria.

They were a man in his 60s, a woman in her 70s, a man and three women in their 80s and one man and a woman in their 90s. Seven of the deaths were linked to aged care.

The virus has claimed 791 Victorian lives.