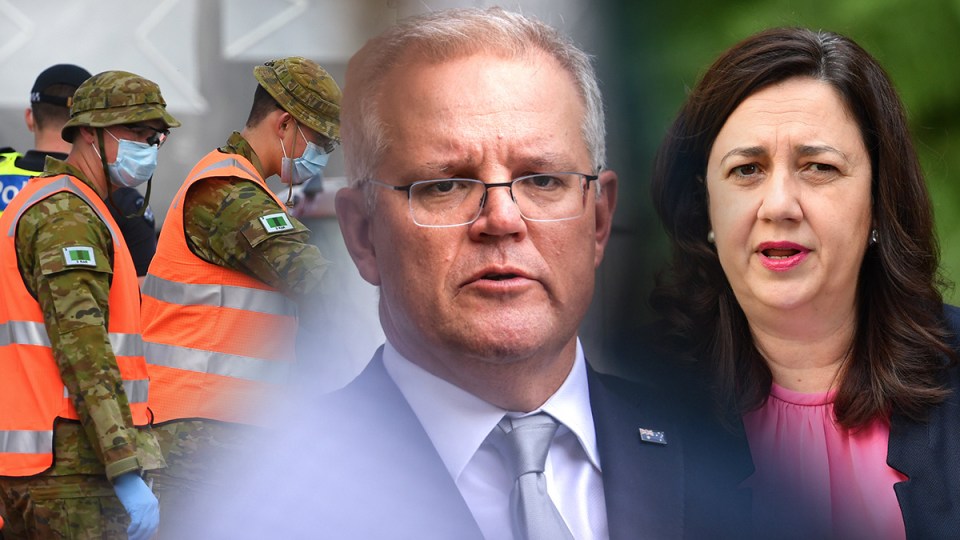 Scott Morrison will fly into Queensland on Saturday to help the LNP campaign against Annastacia Palaszczuk. Photo: Getty/TND

Anger has again erupted over Queensland’s borders, with the state accusing the federal government of withdrawing ADF support to score political points.

The Australian Defence Force will pull out of the Queensland border zone on September 30 – just a day before restrictions are eased for more than 150,000 NSW residents.

Premier Annastacia Palaszczuk expressed her disappointment, calling for talks with the federal government about extending the ADF deployment.

“Our borders have kept Queenslanders safe and we would like to see that support continue,” she said on Wednesday.

Ms Palaszczuk said if ADF personnel remained at other state borders  – such as NSW-Victoria – beyond September 30, then her state deserved the same support.

Ms Palaszczuk and Prime Minister Scott Morrison have been in a bitter dispute over borders ahead of Queensland’s October 31 election.

Earlier in September, the Premier accused Mr Morrison of “bullying” and “disgraceful” behaviour after his public plea for her to ease the rules to allow a Canberra woman to attend her father’s Brisbane funeral.

On Wednesday, Deputy Premier Steven Miles claimed the ADF withdrawal would put pressure on police, who would have to be taken away from other duties to bolster teams at border checkpoints.

“I really don’t think the defence force should be used as a bargaining chip in what is an ongoing political attack on the state government,” he said.

“Our policies have worked and they should back off.”

But federal Health Minister Greg Hunt denied the withdrawal of ADF personnel was “payback” for Queensland’s intransigence on its borders.

“This was the agreement that was reached in August and we’ll continue to provide the support,” Mr Hunt said.

He refused to say if the ADF deployment would be extended if Queensland requested it, saying military movements were a matter for the Prime Minister.

The ADF said it was withdrawing troops so they could prepare for the looming storm season, but Queensland Police Union president Ian Leavers has branded that claim as “political spin”.

He claimed the ADF would “never tell the truth” because it was controlled by political federal bureaucrats.

“Everyone can see it, there’s disagreement between premiers and the Prime Minister and obviously people are being pulled out. I suggest it’s political spin,” Mr Leavers told ABC radio.

He said the ADF had done a tremendous job supporting police and pulling it out “reeks of political interference”.

More than 300 soldiers will continue to oversee quarantine hotels in Queensland.

The row over the withdrawal of ADF support came as Queensland confirmed no new COVID cases on Wednesday.

There are just five active cases across the state.

South Australia has dropped all border restrictions to NSW residents for the first time in months after the eastern state confirmed its second day of no community transmission cases of COVID-19.

NSW residents travelling to SA will no longer have to go into 14 days of self-isolation once the SA government checks the latest case numbers and confirms the border can open.

The decision comes in time for NSW school holidays, which start this weekend, and Virgin Australia plans to resume daily flights between Sydney and Adelaide from October 2.

NSW Premier Gladys Berejiklian said there had been no new locally acquired COVID-19 cases recorded from the 16,759 people tested in the 24 hours to 8pm on Tuesday.

There were six cases of COVID-19 recorded in returned travellers in hotel quarantine.

Ms Berejiklian also said she was hopeful the entire Queensland border will be opened up sooner rather than later after the Sunshine State said it would extend its border travel bubble 100 kilometres into NSW.

“I hope the Queensland government takes that final step in getting rid of the border because the evidence is certainly indicating that it can,” she said on Wednesday.

However, Mr Miles said on Wednesday borders would stay shut to the rest of NSW until at least the end of September. It also remained unlikely they would reopen in October.

Melbourne’s coronavirus restrictions are likely to be wound back sooner than expected, as the state smashes goals set in its COVID roadmap.

Health authorities said the results were better than expected, as the 14-day rolling average of new COVID cases dropped to 29.4 on Wednesday.

“We’re below the 30 at this stage, so I think we’re doing better than we had hoped,” deputy chief health officer Allen Cheng said.

With five days before Victorian Premier Daniel Andrews’ promised announcement of an easing of virus rules, he said on Wednesday he was considering going beyond steps outlined in the state’s reopening plans.

“But I’m not in a position give you the full list of what we’re looking at,” he said.

The state had just 15 new infections on Wednesday.