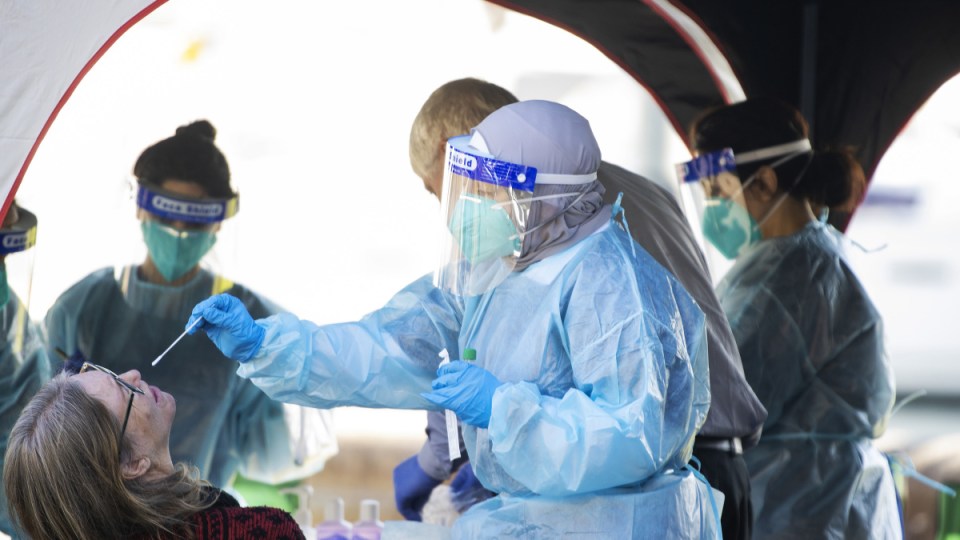 Australians are being warned about complacency about the deadly coronavirus as infections fall across the country, and testing numbers fall with them.

According to the latest national data, testing figures across Australia have fallen 30 per cent in the past three weeks.

“This is not just a good day, this is a great day,” Premier Daniel Andrews said.

“We are seeing these numbers come down, the strategy is working.”

Victoria also had two more deaths on Monday, taking its virus toll to 763 and the national toll to 851. They were both women, one in her 80s, the other older than 100.

But the welcome drop in new infections came after just 7164 virus tests, well down from more than 20,000 done each day at the height of Victoria’s deadly second wave.

“If test numbers were not to be maintained at a robust level, at a level we thought was a good proxy for how much virus is out there, that is what will hold us back from taking the next steps,” Mr Andrews said.

Melbourne’s crucial, rolling 14-day average of new cases has fallen to 34.4 – at the lower end of the 30-50 target required for its toughest virus measures to ease on September 28.

In NSW, there was a similar warning, with just 7765 tests in the 24 hours to 8pm Sunday – about half of Saturday’s level. The state had four more infections on Monday – three in people in hotel quarantine and one linked to the Concord Hospital cluster.

NSW Health said while it was not unusual for testing numbers to drop at the weekend, it would like levels to be above 20,000, particularly in south-west Sydney.

“Complacency is our biggest concern and we just want people to make sure that don’t wait. If you feel the onset of the modest symptoms, please get tested,” she said on Monday.

“What has allowed us to conquer the spread of the virus to this point in time is high rates of testing and be on top of every single case. We know from the advice of experts disease is circulating, especially in western and south Sydney, and we need to make sure we keep testing rates high.”

With border restrictions with Victoria eased and school holidays days away, it was important to remain vigilant as “we’re going into a bit of a high-risk period”, Ms Berejiklian said.

“I’m worried that testing rates nationally might continue to decline,” he said.

There had been hopes that Victoria’s COVID case numbers, which are falling faster than modelling predicted, could bring an early end to lockdowns in Melbourne. Mr Andrews scotched that on Monday.

“I think that we are poised to take some significant steps, albeit they are safe and steady steps, on Sunday,” he said.

“We are in that 30-50 band and it looks like we are going to stay there. That is really very, very important.”

Dr Coatsworth said Melbourne still had some way to go in its fight to control the virus.

“When Victorians come out of restrictions, particularly in Melbourne, the complacency has to be avoided,” he said.

“We know how to stop this virus, if we limit household gatherings, wash hands frequently and have the COVIDSafe app downloaded and maintain physical distance.

“And, of course, mask-wearing being mandatory, these things will allow us to lift restrictions safely.”

The driver worked across Sydney for more than a week while potentially contagious.

Anyone who took taxis across the city’s west and south-west between September 8 and 18 is being urged to monitor for symptoms.

“Fortunately that taxi driver had COVIDSafe installed on their phone, which will be assisting contact tracers at the moment,” Dr Coatsworth said.

Just one new coronavirus case was recorded in Queensland on Monday, a teenager in hotel quarantine after returning from overseas.

That came after more than 2700 tests in the previous 24 hours. Health Minister Steven Miles said that was “well below the level we’d like to be tested at”.