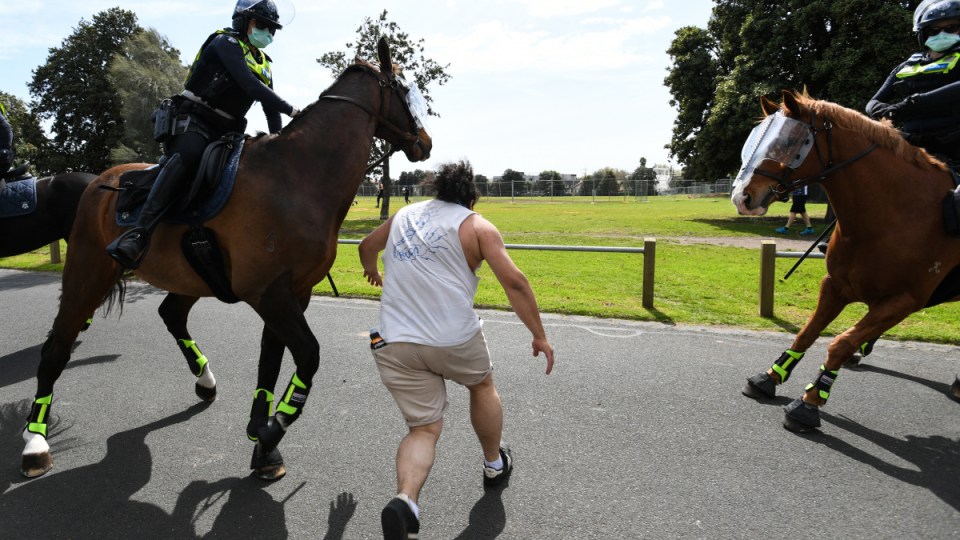 Horse chases, running and fence jumping were features of the disjointed anti-lockdown protests in Melbourne on Saturday. Photo: AAP

Victoria is on track for the easing of restrictions by the end of the month as daily infections hit a three-month low.

The state recorded only 14 new cases as of Sunday morning, the lowest number since mid-June and seven less than Saturday’s tally.

A further five deaths were reported, taking the Victorian toll to 762 and the national count to 849.

It is the 10th consecutive day the state has recorded a daily infections number below 50.

The rolling 14-day average, which needs to be no higher than 50 for Melbourne to progress to the next easing of restrictions, is at 36.2.

“The 14-day average … at that level, under 40, is something that every Victorian should be positive about, proud about, and very hopeful and optimistic about for the weeks ahead,” said Premier Daniel Andrews.

The next step on Melbourne’s roadmap out of lockdown is from September 28 when some on-site work will return, child care will reopen and some school students will be allowed back into the classroom.

People will be able to meet outdoors for up to two hours with members of one other household, though the five-kilometre travel limit will remain.

The state’s health chief Brett Sutton said on Saturday the five-household cluster of 34 cases in the city’s south-east was “under control”, with no new cases linked to the cluster on Saturday.

Contact tracers have acted quickly to contain the outbreak, with government officials speaking with community leaders and members.

Protesters have vowed to take to the streets again on Sunday after a disjointed rally in Melbourne on Saturday that involved a “lot of running”, horse chases and fence jumping.

Police on horseback dispersed anti-lockdown protesters numbering between 50 and 100 in the adjoining inner-eastern suburbs of Elwood and Elsternwick.

The protesters were chased by police through Elsternwick Park and marched along Elwood Beach before dispersing again.

Police made 16 arrests and issued 21 hefty fines as they denounced the nuisance behaviour of a “selfish few” who have been holding weekly rallies.

The protesters, who have been organising via encrypted apps, kept police guessing until the last moment, forcing squads of officers to cover various parts of the city, including the CBD, while waiting to learn the actual location.

Throughout the disjointed protest there was shouting about Premier Daniel Andrews and coronavirus restrictions.

There was “a lot of running and not much protesting” one photographer said while another described the exercise as “chaotic”.

Some protesters continued to scatter through backstreets, even jumping fences into private property.

One arrested by police was filmed by Nine News telling officers: “Wake up, I know you already know this is wrong.”

In a sign that police patience is wearing thin, an official statement issued said: “We are frustrated that these people continue to put the lives of Victorians at risk.”

“While we know the majority of the community are doing the right thing, the behaviour of these selfish few who choose to blatantly ignore the directions will not be tolerated.”

The protesters vowed to stage another demonstration on Sunday and have said they will continue until Victoria’s lockdown restrictions are eased.

A major contact tracing operation is under way after a COVID-positive taxi driver worked for 10 days in Sydney while potentially infectious.

The man tested positive on Saturday and NSW Health says anyone who entered his taxi between September 8 and 18 should monitor for symptoms.

His taxi trips during that time spanned the suburbs of Moorebank, Bankstown, Chipping Norton, Liverpool, Lidcombe, Warwick Farm and Milperra.

Early investigations indicate the driver likely contracted the virus at Liverpool Hospital. He had the COVIDSafe app which is being used to identify contacts.

NSW Health is also working with the driver and 13CABS to identify passengers.

The cab driver also stopped at several places for food during this period, meaning all people in those locations are considered close contacts.

The locations include Campbelltown Golf Club in Glen Alpine on September 16 between 2pm and 4.30pm in the TAB area, and Milton Ulladulla Ex Servos Club on September 12 from 2pm to 6.15pm.

Casual contacts are considered to be those who attended Picnic Point Bowling Club on September 18 from 3pm to 6pm, and Campbelltown Gold Club in Glen Alpine on September 16 from 9.30am to 2pm.

NSW Health said taxi passengers should sit in the back seat and wear a mask.

The state recorded just one locally acquired new case on Saturday, and two cases from returned travellers who are in quarantine.

The local case was a health worker from Concord Hospital who had been working with COVID-19 patients.

Meanwhile, a house party in Bondi has proven costly for the 28 attendees, with police handing each a $1000 fine.