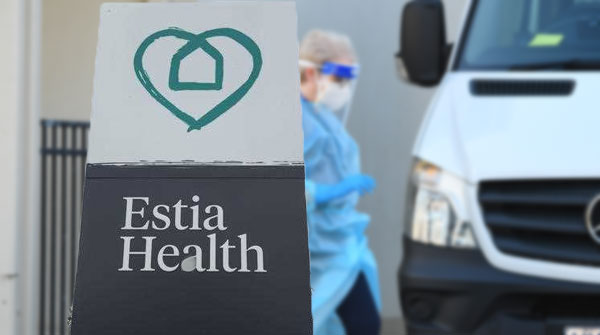 The Estia aged care facility is in lockdown, with some of the elderly moved to hospital.

A Melbourne aged care centre that failed to isolate a resident has become a major virus cluster, accounting for 40 per cent of Victoria’s daily infections on Friday.

The state recorded 45 new cases on Friday, with 18 of them at the Estia Health facility in Keilor in the city’s north-west.

Since Wednesday’s exclusive report in The New Daily, Estia’s infections have risen from eight to 29, with 18 residents and 11 staffers testing positive and the facility plunged back into lockdown.

The elderly home has become a key coronavirus cluster as it battles its  second outbreak sparked when an elderly resident was placed in a shared room in Footscray Hospital.

After the hospital stay – for non-COVID treatment – the man was returned back in the room he shared with another resident at the aged care home.

Within days, Estia was told the patient he had been roomed with in hospital had tested positive to the coronavirus.

The outbreak accounts for almost half of Victoria’s infections at a time when the state’s 14-day rolling infection average had been improving, dropping to 42.7 for Melbourne and 2.3 for regional Victoria.

In the 24 hours to Friday, Victoria recorded 45 new infections and five deaths.

Contract tracers are also racing to stop the spread of a separate cluster linked to five households that breached travel restrictions.

In a statement to The New Daily, the Victorian Aged Care Response Centre (VACRC) said it had “thoroughly investigated the source of the outbreak” at the Estia Health facility.

A number of urgent measures had been taken to contain the outbreak including:

The VACRC statement said Estia had been proactive in managing the outbreak and was communicating with families, providing counselling and undertaking extra cleaning.

Public health authorities are racing to stop infections growing in the Casey and Dandenong council areas on Melbourne’s southeast rim.

Contact tracers discovered members of each house had been breaching the 5km travel limit for visits.

“Five kilometres is one thing, visiting other peoples’ homes is the real issue here,” Premier Daniel Andrews said on Friday.

A special team has been set-up to stop the cluster in its tracks, with the government saying it is in “deep” conversation with local community members and leaders.

Other cases in the area are linked to workplaces, including nine connected to a truck manufacturer and six to Dandenong Police Station.

The state’s toll from the virus is 750 and the national figure is 837.

More Australians will gradually be able to return home each week as states agree to accept more overseas travellers.

There are about 24,000 Australians overseas who want to return home, with around 4000 considered to be vulnerable.

After weeks of pressure, states have agreed to a staged increase to the number of weekly international arrivals.

“They were asking for ADF support and the answer to that was yes,” he said on Friday.

NSW will take an extra 500 people each week from September 27, resulting in about 3000 people weekly.

Queensland and Western Australia will increase arrivals by 200 from the same date. The Sunshine State will receive a further 500 weekly arrivals on October 4, while WA will do the same a week later.

SA will also increase its hotel quarantine capacity from 500 to 800 in coming weeks.