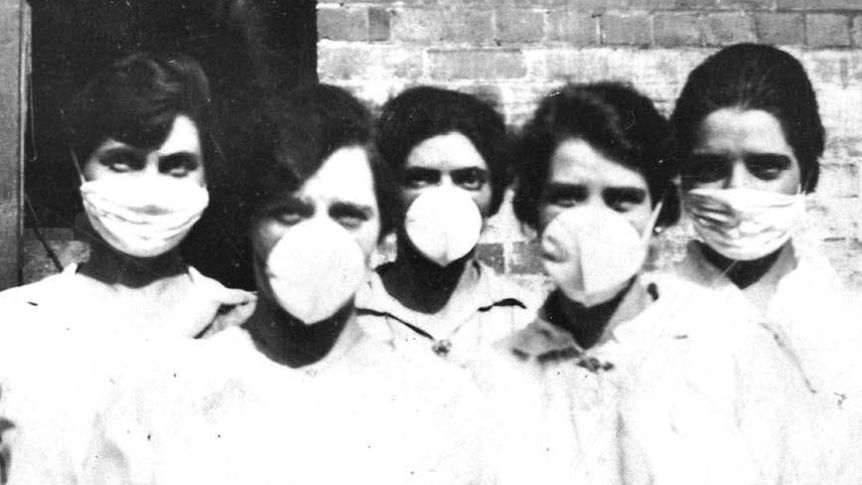 Masks were a common sight during the 1918 influenza pandemic, and again now, just over a century later. Photo: State Library Of Queensland

Just over 100 years ago, a new strain of influenza infected a third of the world’s population.

But within just three years, the threat of this deadly flu had all but passed.

This was a time before modern medical care and even before humans understood what viruses were.

So what has changed since then?

It’s a question plenty of you have asked in recent months: How do pandemics end?

And how will the one we’re currently living through end?

Three ingredients for a pandemic

An infectious agent needs three conditions to cause a pandemic, says virologist Kirsty Short from the University of Queensland:

“For example, we live with MERS today,” says Dr Short, referring to Middle Eastern respiratory syndrome, a coronavirus that is related to the one that causes COVID-19.

“It hasn’t caused a pandemic yet because it’s not highly transmissible from person to person.

“In contrast, the seasonal coronaviruses that we get, probably at one point were a pandemic, and they’ve just become these seasonal colds that we don’t really care about because we’ve evolved immunity to them.”

In terms of the three ingredients that make a pandemic, when it comes to COVID-19 there’s not much we can do to stop the coronavirus from infecting us, because that’s based on the biology of the virus and us as humans.

With physical distancing and masks, we are somewhat able to pull that second lever of not allowing the virus to transmit as much.

But the big thing that stops a virus becoming a pandemic – that is, a large-scale outbreak affecting multiple countries or continents – is the third factor: Immunity.

“Herd immunity can be achieved through natural infection or vaccination,” Dr Short said.

About 10 per cent of the world’s population caught the virus.

Then, about six months into the pandemic, a vaccine was available.

By the following year, the swine flu had become a seasonal flu virus – still circulating, but not at pandemic levels.

“The virus didn’t go away. But the next year, in 2010, the virus was still there, but there was enough pre-existing immunity to its 2009 ancestor that it wasn’t a pandemic.”

A pandemic without a vaccine

But what about the 1918 flu pandemic?

It’s the big historical pandemic many have compared COVID-19 to, so how did it end in the absence of a vaccine?

But without a vaccine it took longer to do so than with the 2009 swine flu pandemic.

“In 1918, there was no vaccine. The virus just went around unchecked. And the pandemic continued in some places until 1921,” she said.

“What happened then is that there was enough herd immunity or pre-existing immunity that it actually became the seasonal flu strain.

“That 1918 virus remained the seasonal flu strain until 1958, when it was replaced by an H2N2 strain, the Asian flu pandemic.”

But achieving herd immunity in the absence of a vaccine came at enormous cost: Tens of millions of people died worldwide.

For the past century, the 1918 flu pandemic was considered a worst-case scenario because it was both highly infectious and clinically severe, says medical historian Peter Hobbins from Artefact Heritage Services.

“Our pandemic planning for the last century has very much relied on that scenario … (and) a lot of that pandemic planning has come into play this year,” said Dr Hobbins, who also holds an honorary position at University of Sydney’s department of history.

“It’s been interesting to see that because of the very nature of COVID, we’ve ultimately had to rely on measures that were very similar to those used in 1919.

“Despite all the advances in our health care system, ambulances, intensive care units, antiviral drugs, supportive care, epidemiology, global surveillance systems, all of those developments we’ve seen in the last hundred years, ultimately we’ve still had to fall back on the sorts of measures that we saw were effective in 1918 and 19, including good nursing care for victims, quarantine, social isolation and basic measures like masks and sanitation.

“Sometimes what we know from the past still turns out to be the most effective response that we have.”

How and when will this pandemic end?

But it’s not like a switch will flip and the pandemic will end the moment a vaccine is available, Dr Short says.

“There’s not going to come a day where we say, ‘OK, on (this date), this will no longer be a problem’. It’s going to be a continuum,” Dr Short said.

“What we should eventually see is that once we get vaccines out, the number of cases will go down. On top of that, therapies will improve and the mortality rate will go down.

It’ll end with a fizzle instead of a bang.’’

And even with the best therapies and vaccines in the world, this virus is almost certainly going to be with us forever, even after the pandemic phase has passed.

“To eliminate a virus from the human population is incredibly difficult. We’ve only ever done it with one human pathogen, and that’s smallpox,” Dr Short said.

“To do that, you need a global vaccination strategy. On top of that, you need a vaccine that provides essentially 100 per cent protection against the virus and against any mutations the virus might throw up. And no animal reservoir. That’s a pretty tall order.”

While the pandemic has been hugely disruptive, Dr Short says it’s also been a reminder that, despite our technological and medical advancements, we’re still vulnerable to disease and need to be on our guard.

“If I could go back in time and just cancel the pandemic, I’m not sure I would,” she said.

“I would cancel the deaths. But I think this was really important for the world to go through, because I think it’s taught us a really valuable lesson that we are not invincible.

“If we can remember what we’ve learnt during this process, as a species, we’re going to be better prepared for the future.”

How do pandemics usually end? And how will this one finish?