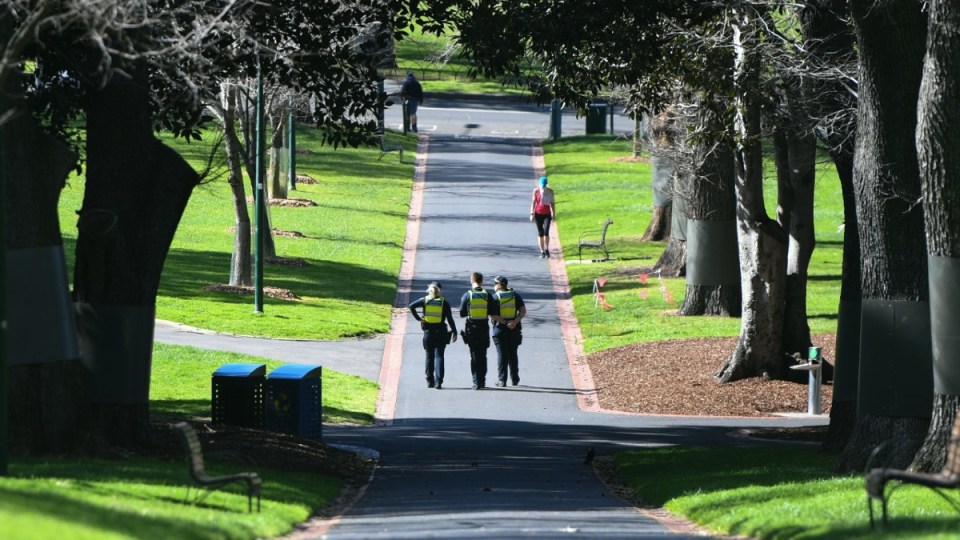 People in Melbourne have been under a strict curfew, but no one can tell us who recommended it. Photo: AAP

Melbourne could remain in hard lockdown until mid-October as new modelling shows the risk of a third wave if restrictions are eased too soon.

Modelling released ahead of the premier’s unveiling of the state’s roadmap out of lockdown shows infections would need to get much lower before it is safe to re-open.

Daniel Andrews will on Sunday outline detail of Victoria’s anticipated blueprint to a ‘COVID normal’, with a traffic light coding system and workplace ‘bubbles’ expected to feature in the loosening of rules.

The dates on which restrictions could be eased would be based on daily virus infection trends.

But while case numbers have been declining in the state, deputy chief health officer Allen Cheng said Victoria was “still a bit off the thresholds” needed to safely allow people to regain certain freedoms.

Melbourne’s six-week stage four lockdown was due to end in mid-September but Professor Cheng said it may be extended until mid-October, the ABC reports.

“It is unlikely we will have aggressively suppressed the virus by mid-September,” the authors say.

“We’re coming down maybe not quite as quickly as we’d like, but the numbers are definitely coming down,” Professor Cheng said.

The modelling estimates Victoria will have a 14-day average of 63 cases a day in mid-September, down from 116 last Friday.

It comes as the chief health officer on Saturday said the state was on the “winning stretch” in pushing down infections but warned stamping out the “last gasp” of COVID-19 will require even more effort.

“I’ve got some impatience about not being at zero, but I am realistic about the fact that there are lots of efforts that need to be made across lots and lots of different areas to really crush this,” Brett Sutton said.

One person was arrested for assaulting a police officer who was injured in the scuffle.

The Melbourne rally drew a crowd estimated at between 200 and 300 who started at the Shrine of Remembrance on Saturday morning and moved on to Albert Park.

Others branded the lethal COVID-19 virus as “a hoax” and chanted ‘Scam! Scam! Scam!’ as they confronted police.

A few protesters denounced vaccinations or blamed Microsoft billionaire Bill Gates for spreading the virus to further his alleged goal of global domination.

An AAP photographer on scene said a man punched officers before he was fitted with a mask and handcuffed.

Later at Albert Park, police reportedly surrounded a group of about 30-50, pushing some to the ground.

“While there may be a few hundred people who are protesting there are millions of people who are adhering to the restrictions and doing all they can to bring COVID-19 under control in that state,” he said.

Police were on standby for a number of rallies across Victoria after plans were aired to challenge the state’s strict lockdown, rules which include an 8pm to 5am curfew, and limited travel and time away from home.

As the protest happened, Premier Daniel Andrews was updating the daily coronavirus statistics with 11 more people who died and another 76 cases.

Mr Andrews said protesting did not help the cause of fighting the coronavirus.

“It is not smart, it is not safe, it is not lawful. In fact it is absolutely selfish to be out there protesting,” he said.

“The only fight we should be engaged in is against this virus.”

Daily case numbers in the southern state have been tracking steadily down in recent weeks and are now usually below 100.

But there are still 1956 active cases in the state and residents are being urged to “work harder” than ever before.