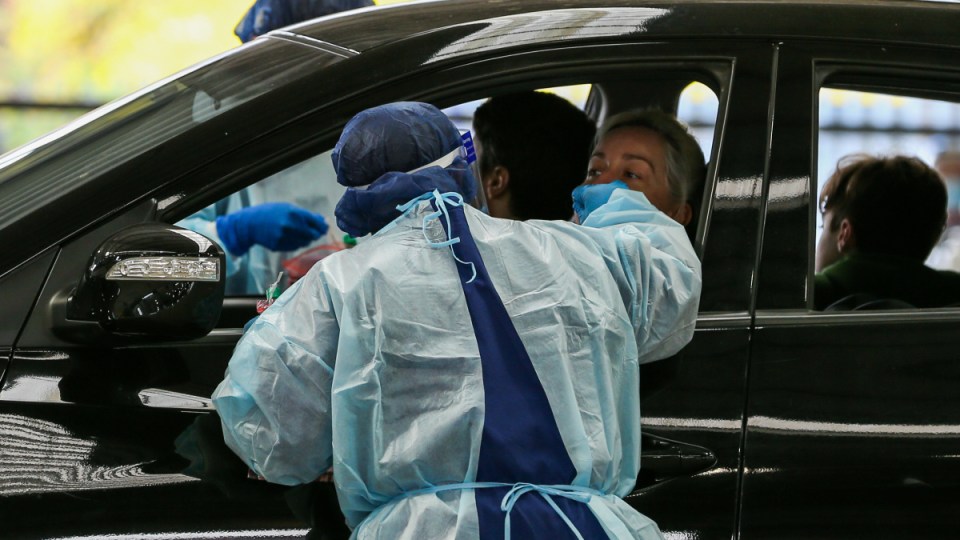 Two Omicron-infected people flew from Dubai to Melbourne, with other passengers being contacted. Photo: Getty

NSW’s coronavirus cases spiked on Thursday, with nine more infections – including five linked to a cluster that is spreading across the Sydney CBD.

The jump in NSW cases came as Victoria’s daily infections fell to 113, their lowest since early July

Tragically, however, Victoria’s COVID toll leapt again, with 23 more deaths confirmed on Thursday. They were 11 men and 12 women, aged from their 60s to their 90s – and 22 linked to the devastating outbreaks that have hit aged care.

The pandemic has claimed 485 Victorian lives, with the national toll at 572. More than 500 Victorians remain in hospital.

Offering some hope, the state’s daily tally of new infections has fallen sharply in the past week – with only one day above 200. Premier Daniel Andrews urged Victorians to maintain their fight against the coronavirus and keep following strict Stage 4 restrictions.

“As challenging as this is, the strategy is working,” he said.

“We’ve got to defeat this second wave before we begin opening up, or we’ll be in the early stages of a third wave, and while there may be some significant respite for people for a short period of time, we’ll be in even worse circumstances very, very quickly.”

The Premier is reportedly close to a deal to extend the government’s powers to impose a state of emergency beyond September 13.

That legislation is separate to Melbourne’s Stage 4 restrictions under the state of disaster declaration that also expires on the same date.

Meanwhile, among the nine new NSW cases confirmed on Thursday were four close contacts of previous infections and five from the new Sydney CBD cluster.

That outbreak has grown to eight, with confirmation of three infected people who attended City Tattersalls Club gym.

Anyone who attended the gym from 8am-2pm on August 19, 21 or 23 August is a close contact and must get tested for COVID-19 and isolate at home for 14 days. Other members of City Tattersalls should get tested if they have even the mildest symptoms.

Other new NSW locations of concern include

Elsewhere, Queensland had two new virus infections to report on Thursday. One person is in hotel quarantine and the other is a trainer from Queensland’s corrective services.

The state’s correctional facilities have been locked down after the trainer, from the Queensland Corrective Services Academy at Wacol, returned a positive result on Wednesday.

Premier Annastacia Palaszczuk said reports that he had been working in prisons were incorrect.

Health Minister Steven Miles said there was no clear link yet between the trainer’s case and the cluster at the Youth Detention Centre, also at Wacol.