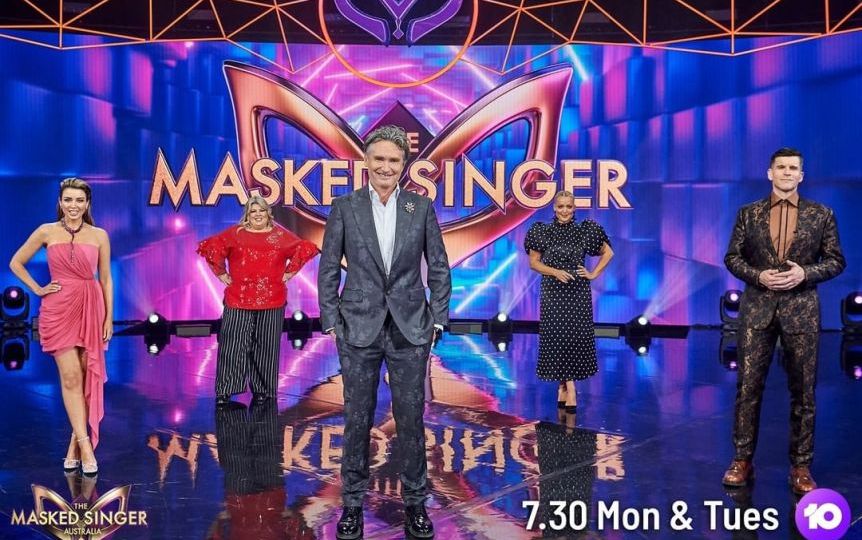 The entire cast and crew of popular reality TV show The Masked Singer have been forced into isolation after “several” positive cases of the coronavirus.

Stars including panellists singer Dannii Minogue, radio hosts Jackie O and Dave Hughes, comedian Urzila Carlson and television host Osher Gunsberg have been ordered to self isolate, as have the singers, dancers and production crew.

Gusberg is also the host of popular dating show The Bachelor which may also be affected by his absence.

The sudden shutdown of the Melbourne-based singing competition comes ahead of filming of the finale which was due to start.

Authorities have quickly invoked a testing regime to weed out more possible infections.

The unusual program involves the panellists guessing the celebrity identity of performers wearing elaborate costumes before a dramatic unveiling.

This year’s filming format was changed because of the pandemic, with the studio audience which votes on elimination located separately in Sydney.

Channel Ten issued an official statement on its Instagram account informing its fans it still had plenty of episodes “ready to go” during the lockdown.

“Production of The Masked Singer has been immediately suspended as a result of a crew member receiving a positive test result for COVID-19,” a statement from the show’s Twitter account said.

“The entire production team, including the masked singers, the host and panellists are now in self-isolation. They are all being monitored closely and are in constant contact with medical authorities.”

Thanks for all the love and support fam! We've still got plenty of episodes of The Masked Singer ready to go so we'll see you 7.30 Monday and Tuesday on 10.

Meanwhile Victorians have been told that wearing masks will become the new normal even when stage four restrictions are lifted.

The state on Saturday recorded 182 new cases – the second consecutive day of new coronavirus cases below 200 – with 30 of them from “mystery” sources.

The state’s death toll continues to climb, with 13 more deaths bringing the total to 398 and national count to 485.

Premier Daniel Andrews, who has long talked of Victorians needing to adjust to a new “COVID normal”, said masks will remain part of life for a long time, along with careful hand-washing and physical distancing.

Melbourne residents still have about another three weeks of stage four restrictions ahead of them before they are revised on September 13 while regional Victoria is on stage three restrictions.

In NSW, a second Sydney hotel quarantine security guard has been diagnosed with COVID-19 after a week-long testing blitz on contacts of the first ill guard.

The first Marriott guard was diagnosed on Tuesday having already worked shifts at Sydney’s Flemington Markets and Parramatta Local Court.

NSW reported nine new cases of COVID-19 in the 24 hours to 8pm on Friday while the latest security guard – who worked at the Marriott Hotel in Circular Quay on August 3, 5, 9, 10 and 11 – was confirmed after the 8pm deadline.

He was the sole person among the first ill guard’s 700 contacts to return a COVID-positive test.

The two guards worked the same shift on August 3, Dr Chant said, while the newly-diagnosed guard also worked at Sheraton Grand Hyatt Park hotel on the night of August 16.

He was asymptomatic at the time of his shifts.

Queenslanders are on alert after six additional COVID-19 cases were confirmed in a burgeoning cluster at Brisbane’s youth detention centre.

It was the first case of community transmission in more than a month and a wake-up call to the state which has been enjoying a COVID-free lifestyle for several months.

Authorities reacted to immediately place 10-person limits on indoor and outdoor gatherings in the greater Brisbane region and limits of 30 elsewhere in the state.

Urgent protection measures are in place after an increase of COVID-19 cases were reported in Queensland. #covid19 pic.twitter.com/t0hRGyzGRR

Queensland reported nine new cases on Saturday, three of which were crew members on cargo ships and the other six connected to the detention centre.

Children at the Wacol centre remain in lockdown and tests continue after a worker was diagnosed with the virus on Wednesday. The 77-year-old Ipswich woman had experienced mild symptoms and continued to work while infectious.

The centre’s 127 residents have been in lockdown since Wednesday evening and none have yet been diagnosed, while all 500 staff members are being tested.

Of the seven cases in the cluster, five are detention centre staff and two are close contacts.

Contact tracing is under way and aged care homes and disability accommodation services in the state’s southeast will go into immediate lockdown.

“We’re concerned about this (detention centre) cluster because people have been out and about in the community,” Ms Palaszczuk told reporters.

“We do expect there could be even more cases linked to this cluster but we will not know those until further results come in.”

Infections in Italy have surpassed 1000 daily cases for the first time since rigid lockdown measures were eased in May.

Once one of the worst-affected countries in the world in the pandemic’s early phase – with 35,000 deaths – Italy had managed to reign in the spread of COVID-19 after peaking in March-April.

However it has seen a steady increase in infections over the past month, with experts blaming holidays and night life for causing people to gather in numbers.

The country last recorded a higher figure on May 12, when 1402 cases were reported, six days before restaurants, bars and shops were allowed to re-open after a 10-week lockdown.

Despite the rise in infections, daily death tallies remain low and are often in single figures.