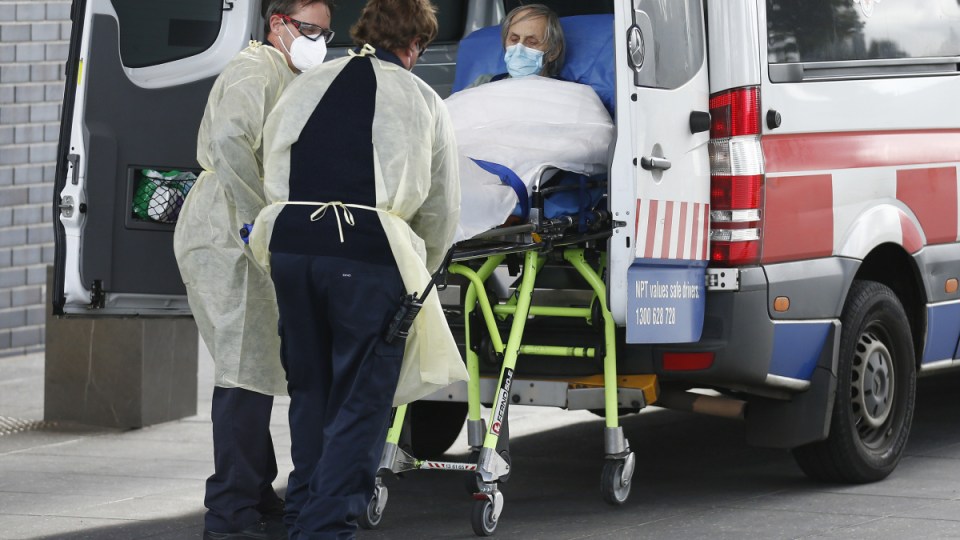 A resident is moved out of the Epping Gardens home, in Melbourne's north, where there have been more than 200 COVID infections. Photo: AAP

Prime Minister Scott Morrison has again deflected federal responsibility for the deadly virus crisis that has rocked aged care in Victoria – even as the state reported 12 more deaths on Wednesday.

Victoria’s COVID toll rose to 363 on Wednesday – up 117 in a week, with the majority of deaths linked to aged-care outbreaks.

All of the 12 deaths confirmed on Wednesday were linked to aged care. They were five men and seven women, aged from their 70s to their 90s.

Earlier, Mr Morrison pushed back at claims the federal government should take responsibility for failing to protect Australia’s elderly from the coronavirus.

“We regulate aged care, but when there is a public health pandemic, then public health, whether it gets into aged care, shopping centres, schools or anywhere else, then they are things that are for Victoria,” Mr Morrison told ABC breakfast television on Wednesday.

“It’s not as binary as a lot of people think.”

Last week, counsel assisting the aged-care royal commission, Peter Rozen criticised what he said was an “unforgiveable” lack of a plan to deal with the pandemic in the sector – even after devastating earlier outbreaks at homes in NSW.

On Wednesday, Mr Morrison said he still had faith in the aged-care royal commission, despite disagreeing with its criticism.

“The aged care royal commission is a key element of how we’re responding.”

Many of the outbreaks in Victorian aged care have been blamed on contract workers moving across multiple facilities. Some had opted not to get tested if they had symptoms because they feared losing work and wages.

Aged-care provider BlueCross reportedly asked staff at one centre in northern Melbourne to work across multiple sites as recently as last week.

Mr Andrews said employers should not do that. The Victorian government has introduced cash payments for workers who will get no pay if they have to self-isolate because of COVID-19.

Mr Morrison also told Nine’s Today show that it appeared Victoria was getting on top of its deadly second wave.

“Obviously the number of deaths we have seen is very upsetting and disturbing,” he said.

“But those [case] numbers look like we are getting on top of it now, which is welcome and we’ve got to stay the course.”

Victoria had 216 more coronavirus infections on Wednesday, with Melbourne approaching the halfway mark of a six-week shutdown of all but essential businesses.

Elsewhere, NSW had seven new COVID cases on Wednesday, including a security guard who worked in a Sydney quarantine hotel (reported on Tuesday afternoon).

Queensland reported one case – in a traveller who had returned from Papua New Guinea and was in hotel quarantine.

Victoria’s aged-care crisis will be under a legal spotlight in coming weeks.