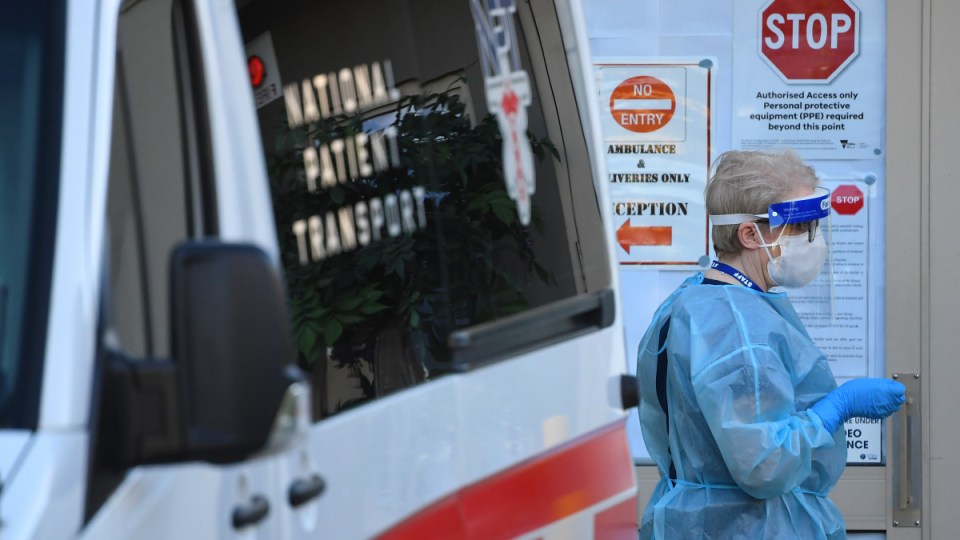 A healthcare worker at the Glenlyn Aged Care Facility in Melbourne's west, one of three taken over by the state government this week. Photo: AAP

Both figures are up on Thursday’s tally of 278 and eight fatalities.

The latest deaths take the state’s coronavirus toll to 289. Australia’s national toll is 375.

Premier Daniel Andrews will confirm more details in a briefing later on Friday.

Despite Friday’s jump, Victoria’s seven-day average of new infections has fallen from more than 500 to less than 400.

Health experts have said consistently that Victoria’s virus figures will fluctuate as Stage 3 and 4 restrictions take effect in Melbourne and the wider state. Victoria is in the second week of six weeks of stringent measures.

“A swallow doesn’t make a summer,” he said.

At the same briefing, Mr Andrews said the state had a “long, long way to go” before Melbourne’s rules could be eased.

Elsewhere, a testing blitz began in regional Victoria on Friday morning as the state government attempts to rein in new cases.

Geelong, Ballarat and Bendigo have been identified as a source of concern after collectively recording more than 250 cases in the past 14 days.

Mr Andrews said more data would develop a “clearer picture” of the outbreaks, while deputy chief health officer Allen Cheng hoped it would “obviate the need for stage four” in the regional centres.