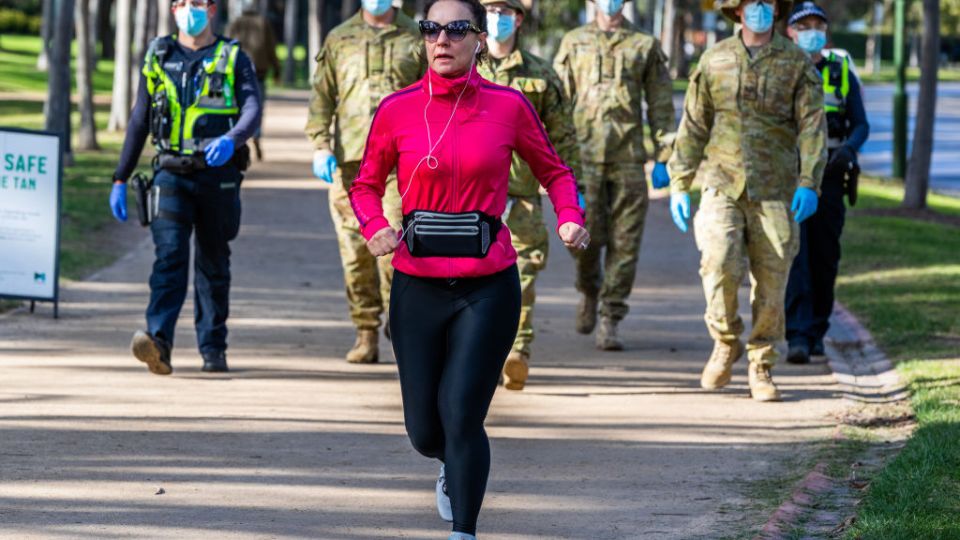 Melburnians are heading towards the middle mark in six weeks of tough virus measures. Photo: Getty

Victoria’s daily infection rate appears to be stabilising but the full impact of Melbourne’s current hard lockdown won’t be known for another two weeks, the chief health officer says.

The state reported 466 new cases on Saturday after announcing 450 on Friday and 471 on Thursday.

The death toll rose to 193 on Saturday with the passing of 12 more people, including a man in his 30s and six deaths in aged care.

“But we can’t have 500 cases every single day and the associated morbidity, hospitalisation, intensive care requirements and debts that are associated with that number every day,” he said.

The stable numbers were a reflection of the previous stage three measures.

Metropolitan Melbourne has been under tough stage-four restrictions for a week but residents won’t see the results of these efforts for another one to two weeks.

Victoria Police did 3554 spot checks on homes, businesses and public places in the 24 hours to Saturday morning, fining 197 people for breaching the chief health officer’s directions.

But while daily coronavirus cases appear to be stabilising the Victorian premier can give no assurance that Christmas 2020 will be a normal one.

“What I would want to do is make sure there are as many people at Christmas dinner as possible,” Daniel Andrews said on Saturday.

“Until we get the vaccine, it is going to be part of our lives, but it is not about going back to normal, it is about finding COVID-normal.”

Researchers hope they have found the key to helping COVID victims recover more quickly with the help of an existing and approved drug.

The Alfred Hospital and Monash University are enrolling symptomatic people with COVID-19 to trial Favipiravir, a drug originally developed to treat people with influenza.

Patients must be in the first five days of diagnosis.

The antiviral drug is approved for use on COVID patients in Japan and trials are already underway in multiple countries including China, Japan and the United States.

“There were two smaller trials in China which showed Favipiravir cleared the virus more quickly and people with less severe infection recovered more quickly,” infectious diseases specialist Dr James McMahon, who is leading the study, said in a statement on Saturday.

“These studies were in a small number of people, so it needs to be studied further in a placebo-controlled study.”

Those participating in the Australian trial will be required to take an oral medication twice a day for 14 days and do a swab of the back of their throat every two days.

Half will be given a placebo.

“It is a rigorous way of working out whether this drug helps people clear the virus and recover more quickly,” Dr McMahon said.

He said the drug  – sold under the brand name Avigan – had proven safe in trials studying other viral infections before COVID-19.

“This is why we think it is an excellent candidate to study not only for people in hospitals but also people in their homes with COVID-19,” Dr McMahon said.

Frydenberg: States must do more

Federal Treasurer Josh Frydenberg is putting pressure on states and territories to stump up more cash to help the national economy cope with the economic impact of COVID-19.

“The states can do more, the states need to do more. They have the balance-sheet strength to do so,” he told reporters in Melbourne on Saturday.

He singled out Victoria, saying nearly half the state’s private sector workforce will be on JobKeeper in the coming months.

“The expectation is that of the four million Australians who will be on JobKeeper in the September quarter, some 1.5 million of them will be Victorians.”

Mr Frydenberg championed the federal government’s $314 billion spend on bracing Australia against the virus, including through programs such as JobKeeper and JobSeeker.

By comparison, he said states and territories had promised about $44 billion.

He said the support could come in various forms, such as small business grants, tax relief or bringing forward infrastructure projects.

“The Victorian government has already made some announcements, they’ve made around a half-billion-dollar announcement recently for small business grants and some relief for those businesses, but of course it needs to do more.”

Opposition Health spokesman Chris Bowen asked the government to be specific in what it wants.

Cost of returning to Queensland

Queensland residents trying to come home from New South Wales, Victoria or the ACT must now arrive by air and pay at least $2800 for their two-week stay in hotel quarantine.

The tough new rules follows Premier Annastacia Palaszczuk’s decision to close off the border to guard against community transmission of coronavirus.

Those who fail to comply with the border rules could face an on-the-spot fine of $1334, a court-imposed penalty of up to $13,345 or six months’ imprisonment.

The closure came into force at 1am on Saturday causing havoc at border crossings, with many cars waiting hours only to be turned around.

Queensland Police Services Chief Superintendent Mark Wheeler said 142 people – including 18 Queenslanders – were refused entry into the state after the border closed at 1am on Saturday.

“It’s unfortunate but this is all about stopping COVID-19 coming into Queensland,” he said.

Despite not having anywhere near the number of active cases as Victoria, Queensland has declared NSW and ACT virus hotspots.

Meanwhile New South Wales residents are largely confined to their state as Queensland’s border restrictions have come into effect.

Those keen to leave NSW could get to the Northern Territory, though it is barred to Sydneysiders.

NSW has ramped up its own travel restrictions, forcing its residents returning from coronavirus-hit Victoria into two weeks’ hotel quarantine.

Entry to NSW from Victoria is now restricted to flights landing at Sydney Airport, except for border community residents with permits.

NSW recorded nine new cases on Saturday, one of which was a student at Tangara School for Girls in Cherrybrook.