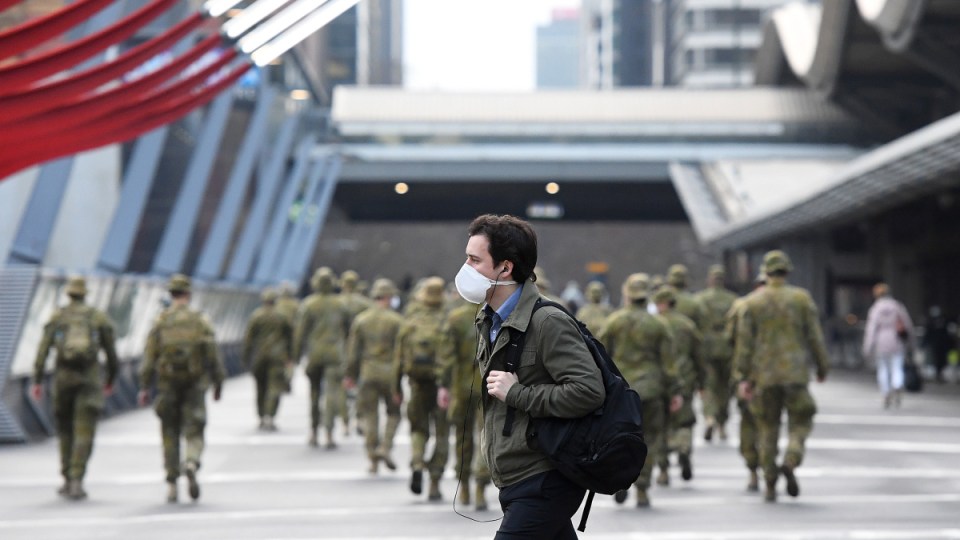 Victoria's efforts to fight the virus have been bolstered by more than 1500 ADF personnel. Photo: Getty

Victoria has confirmed another 450 COVID infections, and 11 more fatalities.

Seven of the deaths were linked to aged care.

Victoria’s toll from the pandemic has risen to 181, while the national toll is 266.

Friday’s figures were well short of the record 725 and 15 deaths Victoria reported on Wednesday.

But infection numbers in healthcare workers continue to grow.

“To date, there are 1527 confirmed cases in healthcare workers,” Mr Andrews said.

“That’s 139 more than yesterday and there are currently 911 healthcare workers who are active cases.”

Aged-care workers, nurses and ancillary staff make up the greatest number of healthcare cases, which Professor Sutton put down to the closeness of interactions between staff and infected patients.

There are 7637 active cases across the state.

Professor Sutton said there had been significant fluctuations in numbers in recent days but the overall trend was 400-500 a day.

“We are now looking to see the effects of various interventions – obviously masks may show up in the numbers in days to come, and obviously the Stage 4 restrictions will show after that,” he said.

VCE students will also be able to breath easier after Education Minister James Merlino said they would be assessed individually and any impact from COVID-19 would be reflected in their ATAR rankings.

Teachers will be asked to assess students, with school closures, long absences, significant increases in family responsibilities and physical and mental health considerations to be factored in.

He said students would receive their certificates, scores and rankings by the end of the year.

“It’ll be a fair reflection of their year,” he said.

Meanwhile, two men accused of planning an anti-lockdown protest in Melbourne have had their homes raided and been arrested.

Police vowed to crack down on the protest, planned for Melbourne’s CBD on Sunday, calling it a “blatant breach” of COVID-19 restrictions.

Mr Andrews also said some COVID-positive Victorians continue to defy orders to stay at home. Of 1150 people door-knocked by Australian Defence Force and state health authorities on Thursday, 150 were not at home.

They are among a total of about 500 people from the door-knocking program who have been referred to Victoria Police.

“That is certainly a smaller number of people that could not be found at home than we have seen,” Mr Andrews said.

“I’m very grateful to those Victorians who are doing the right thing and are where they should be – and that is away from other people, isolated at home.”