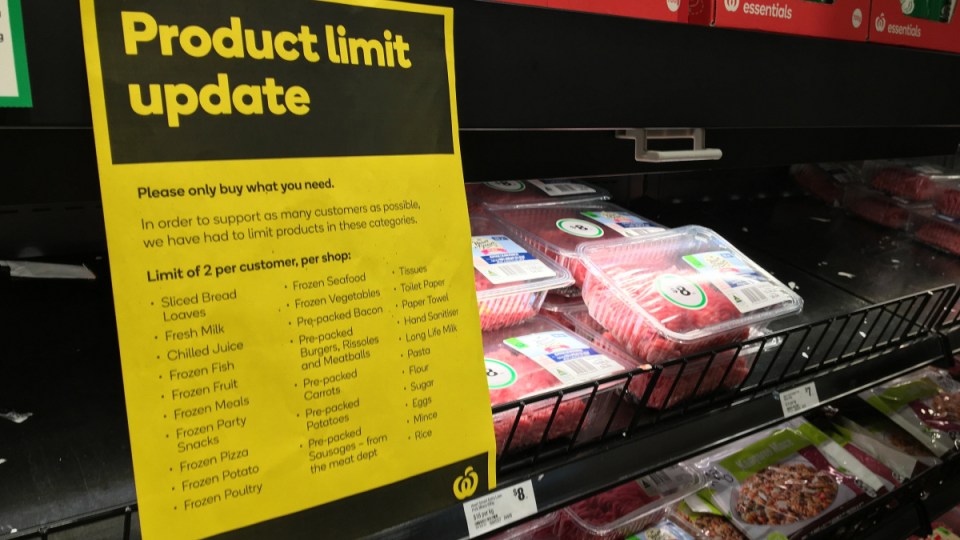 There have already been shortages of meat in Victorian supermarkets ahead of the shutdowns. Photo: AAP

Daily coronavirus infections in Victoria fell to 471 on Thursday, well below Wednesday’s record total of 725, but – tragically – the death toll rose by eight.

Premier Daniel Andrews confirmed that two men in their 60s, three men and two women in their 80s, and a woman in her 90s had all died overnight.

Four of them were linked to aged care. Victoria’s death toll from the pandemic is 170.

It comes amid a worrying developing in NSW, which confirmed 12 more coronavirus infections on Thursday – all from community transmission.

NSW has issued alerts for a string of venues after Thursday’s cases. They include a stadium in Newcastle where an infected man was among thousands at an A-League football match on Sunday.

Also on Thursday, Melbourne began its first full day of a strict lockdown of all but essential businesses that will last until at least mid-September.

Business leaders held crisis talks with the state government late into Wednesday and early on Thursday amid fears the Stage 4 shutdown will interfere with national supply chains for critical items, including food.

Mr Andrews said there had been “many, many round tables, many hundreds and hundreds of individual discussions with different sectors” to get capacity in many reduced by a third.

This is always going to be an imperfect process – it’s never been done before,” he said.

“There will always be further changes based on further feedback we get based on how it is running.”

Victorian beef, lamb and pork processors will reduce their capacity by a third. Chicken processors will take a 20 per cent cut. The measures will not apply if a plant has fewer than 25 staff.

“All of these measures are designed to drive down to the lowest numbers of workers we can practically get to without at the same time delivering a shortage of products,” Mr Andrews said.

“Whether that’s personal protection equipment, medical supplies, respiratory equipment, food, grocery, meat – whatever the case might be – that they can get across those borders consistently,” he told Sky News on Thursday.

Mr Andrews said supermarkets and warehouses and distribution centres (particularly those responsible for medical equipment) have been given an extension until midnight Sunday to try to meet the Victorian regulations.

“The important thing is they will reduce, particularly for supermarkets, their overall workforce across distribution and, indeed, across their entire functions, so all the way across their business they’ll bring those numbers down to that two-thirds level,” he said.

“We have to urgently fix supply chain issues at distribution centres,” she said.

From Thursday, essential workers in Melbourne are required to show permits if pulled over by police to prove they’re allowed to leave their homes.

Victoria is in a declared state of disaster and stage four restrictions, including a curfew, have been imposed on Melbourne.

“What we do know is that the cases are not about to disappear overnight. I think it’s immensely important that we’re honest about that.”

Mr Hunt said seven of Australia’s eight states and territories were doing well in their fight against the virus. But the situation in Victoria remained “very, very serious”.