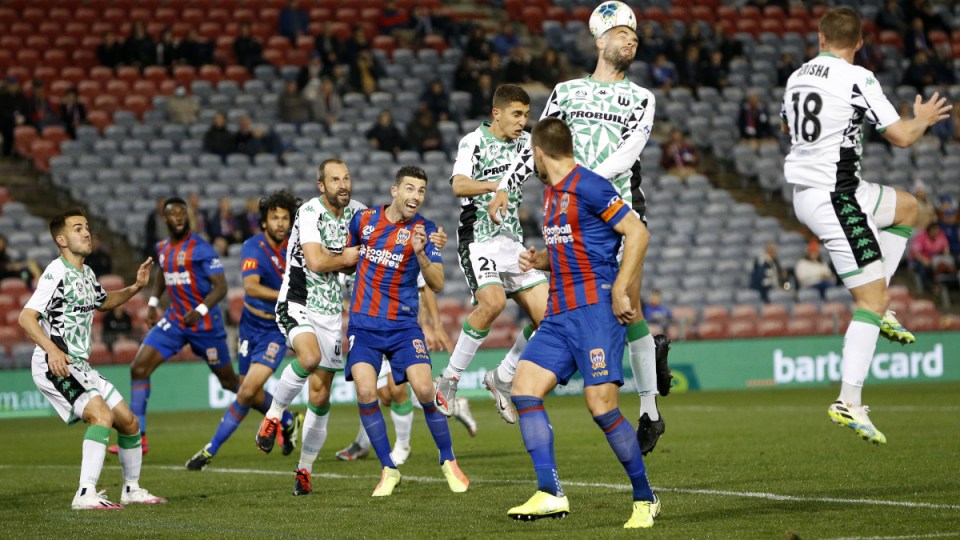 The infected man was one of 2570 in the crowd that watched Jets played Western United at McDonald Jones Stadium on Sunday. Photo: AAP

Newcastle has become a NSW COVID-19 hotspot after a man with the virus visited several pubs at the weekend and attended a local A-League match.

The man is a close contact of the teenager whose case has led to the closure of a Newcastle high school.

His diagnosis has shut down St Pius X school at Adamstown temporarily as authorities trace close contacts among 1050 students and 200 staff.

“All students and staff are required by NSW Health to self-isolate until you are notified you are not a close contact,” principal Robert Emery said.

It came as NSW Premier Gladys Berejiklian said the state was in “a real nail-biting situation”.

“We are definitely on a knife’s edge, and we are about halfway through what is a really critical period,” she told Triple M Sydney on Thursday.

“When we realised how bad Victoria’s situation was, we knew we had four-six weeks of a real nail-biting situation and we are about half way through.”

NSW confirmed 12 more COVID-19 cases on Thursday from more than 28,000 tests in the 24 hours to 8pm on Wednesday. All were from community transmission or linked existing outbreaks.

The state has 104 active COVID cases, including 10 patients in intensive care. Its biggest clusters (with some cases that are resolved) include:

The second Newcastle case will be included in Friday’s statistics. Hunter New England Local Health District said the man in his 20s attended Sunday’s A-League match in Newcastle and all spectators should self-isolate immediately and get tested if they develop symptoms.

The Jets played Western United at McDonald Jones Stadium in front of a crowd of 2570.

Anyone who attended the following venues at the specified times is also asked to self-isolate and seek testing:

The venues have been notified and are undergoing cleaning. Contact tracing is underway.

Hunter New England Health is also urging anyone who visited the following venues at the times specified to be alert for symptoms:

The infected teenager caught the No.26 Hamilton to Adamstown school bus on Monday. Everyone on the bus at that time is required to isolate and seek testing.

He was also in the Newcastle Jets under 15s squad that played a soccer match against the Stanmore Hawks at Arlington Oval in Dulwich Hill last Saturday.

Elsewhere, a primary school in Sydney’s west has also been closed for deep cleaning and contact tracing after a COVID-19 case was identified in that school community.

All students and staff at St Margaret Mary’s Primary School in Merrylands were ordered to self-isolate on Wednesday after the positive case.