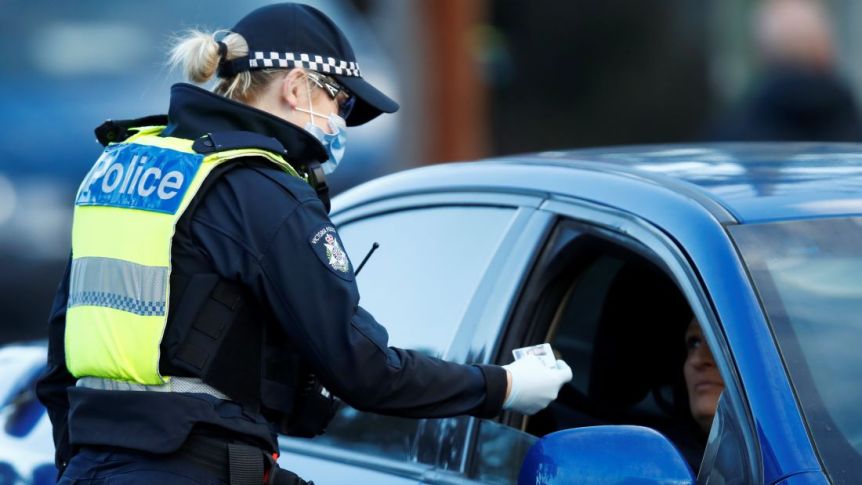 Checkpoints are returning to the Victoria-NSW border, with the threat of renewed delays in crossing. Photo: AAP

Melbourne’s Stage 4 restrictions mean there are very few reasons for people to be outside of their homes.

Police will be pulling people over to conduct compliance checks, with big fines now in place for those outside without a permitted reason.

On Tuesday the Victorian government announced a worker permit system is being introduced to stop people getting around the new lockdown rules.

Workers from permitted industries are allowed outside their homes to travel to or from work, even during the 8pm to 5am curfew.

But Victorian Premier Daniel Andrews says employees will be required to carry a worker permit when they travel to their workplace.

We still don’t know exactly what the permits will look like yet, but Mr Andrews says the system will be “as simple and easy as possible”.

Employers will be required to issue these signed permits to their employees to allow them to attend a workplace from 11.59pm on Wednesday.

“It’s a piece of paper. Your employer fills it out,” Mr Andrews said.

“You carry it with you.

“If you’re pulled up by police, you can simply provide that piece of paper and then you would be waved on to go about your business.”

Where can I get a permit?

They should be available online on Tuesday afternoon.

Who needs a worker permit?

They are only for people who can’t work from home and are in industries still permitted to operate under the new Stage 4 restrictions.

But Mr Andrews says some people will be able to show their workplace IDs to police to confirm why they’re out, especially if they’ve got a uniform that connects them to their workplace.

“Nurses, for instance, will be able to use their hospital ID,” he said.

“Victoria Police members will be able to use their ID.”

Can Melbourne workers travel to regional Victoria to work?

Mr Andrews has said workers can still travel outside Melbourne if they’re working in a permitted industry.

But he has reminded people not to go to work if they have even the mildest of COVID-19 symptoms.

“I would appeal to anyone in Melbourne who is in one of these industries that’s remained open or is scaled back who needs to go to work – and they’re doing very important work – but the last thing you want to be doing is taking this virus to work with you into regional Victoria,” he said.

“So, any symptoms whatsoever, the only thing to do is to get tested and then to wait until you get the results of those tests.”

Does a worker permit mean I can send my kids to child care or school?

Children of permitted workers will still be able to go to school or be looked after at kindergartens or childcare centres.

Do both parents need permits to send kids to child care?

We don’t know yet.

Mr Andrews has said the government is still working through the details around child care.

“We’ll inform people and we’ll try and make it as simple and as easy to understand as we possibly can,” he says.

Working outside home during Melbourne’s Stage 4 coronavirus restrictions will require a permit. Here’s what we know about them