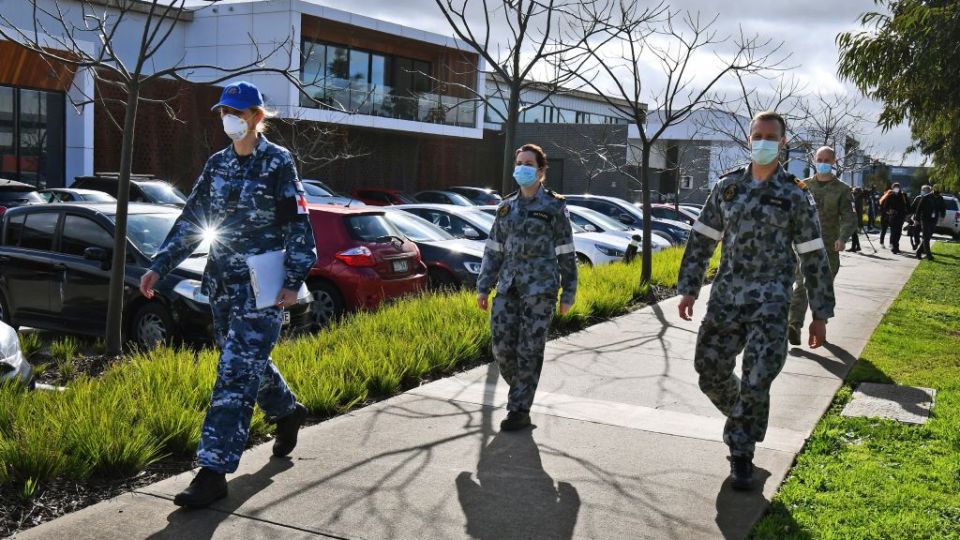 Victorians are on the brink of an extreme lockdown amid rising numbers of untraceable “mystery” COVID-19 cases and anger at blatant disobedience.

The state’s cases rose by 397 on Saturday – with 49 of those from no known source – bringing suspected community transmission to nearly 2000 cases.

Total fatalities rose to 201 on Saturday following the deaths of a man and two women aged in their 80s and 90s.

A senior federal cabinet minister says the Morrison government is “absolutely” behind Victoria should it impose even stricter restrictions.

“We’re working collaboratively and closely with them as they seek to address this second wave,” federal Education Minister Dan Tehan, and himself a Victorian, told Sky News’ Sunday Agenda.

“We’ll continue to offer as much support as we can and work with the Victorian state government.”

Premier Daniel Andrews is expected to announce new restrictions as early as Sunday, believing they could be a “circuit breaker” for rising cases.

NSW recorded its first death in more than a month amid 17 new infections while Queensland’s latest case has been linked to the three women who returned infected from Victoria.

In Victoria, wearing masks will be compulsory right across the state from midnight Sunday.

The tighter lockdown restrictions are anticipated to lead to a massive economic shutdown, with all but essential businesses told to close.

Chief Health Officer Brett Sutton confirmed discussions were underway about a harder lockdown as authorities met on Saturday night to discuss the next step to curb Victoria’s high daily infections.

Under possible New Zealand-style restrictions, only supermarkets, pharmacies and service stations would be allowed to operate.

Schools would go back to remote learning and residents’ movements would be strictly limited.

Experts spent the weekend analysing infection data from the first half of Victoria’s six-week lockdown, with Premier Daniel Andrews saying further restrictions could be a “circuit breaker” to hundreds of daily infections.

One person was fined on Saturday for leaving Melbourne to drive to Wodonga for a hamburger while another tried to drive from Werribee to Springvale – opposite sides of Melbourne – for groceries.

Further fines were issued to a Victorian who was caught driving from Melbourne to Ballarat for “fresh air”, a group who hosted an AirBnB party, patrons and staff of a brothel that had continued operations and a man who drove from Thornbury to Werribee to get a haircut from his favourite barber.

Mr Andrews said the time for warnings had passed and a “much bigger fine” through the courts was being considered as an alternative to on-the-spot fines.

The premier said one of the biggest concerns was tracing community transmission, particularly in relation to the growing number of infections from an unknown source.

“We can’t be certain there’s not even further community transmission, even more mystery cases out there,” he said.

“That is in some respect our biggest challenge.”

NSW has confirmed its first coronavirus-related death in more than a month as authorities seek to suppress a number of growing clusters.

The state had 17 new cases on Saturday, coinciding with the closure of several Sydney venues for deep cleaning and contact tracing after being linked to coronavirus. At least one of the 17 new cases has no known source of infection.

An 83-year-old man connected to the Crossroads Hotel cluster in southwest Sydney died on Saturday morning, taking the NSW death toll to 52.

It was the first coronavirus-related death confirmed by NSW Health since late June.

Meanwhile a NSW duo has been arrested after entering South Australia after they were turned back.

The 25-year-old man and 20-year-old woman tried to cross the border at Pinnaroo on Thursday, claiming they were headed interstate to sell a dog.

They were refused entry and turned back to NSW, but police stopped their NSW-registered car in the Adelaide suburb of Kilburn on Saturday afternoon.

The pair were charged with breaching COVID-19 directions and have been denied bail ahead of a court appearance on Monday.

NSW Health’s Dr Jeremy McAnulty said most cases in the past week have been associated with local clusters and close contacts of known cases.

However seven cases were of unknown origin.

The Thai Rock Wetherill Park cluster is nearing 100 COVID-19 cases, while the cluster in Potts Point has reached 24 and the funeral events cluster sits at 25.

A popular venue on Sydney’s Northern Beaches, meanwhile, was on Saturday forced to shut after hosting a COVID-positive patron on the afternoon of July 24.

The Bavarian in Manly underwent deep cleaning and reopened to the public on Saturday afternoon. Patrons on the afternoon of July 24 should monitor for respiratory symptoms.

The Harpoon & Hotel Harry in Surry Hills, Matinee Coffee in Marrickville and Tan Viet in Cabramatta are among other venues required to undertake deep cleaning in recent days.

Harris Farm Market in Leichhardt and Darlo Bar in Darlinghurst also on Friday confirmed they were frequented on July 26 by COVID-positive people and have undergone deep cleaning.

Queensland’s latest case of COVID-19, confirmed on Saturday, is a woman who may have been infectious while working at a Brisbane nursing home.

The facility at Pinjarra Hills in Brisbane’s west had already been locked down and staff and residents are being tested after the woman’s husband tested COVID-positive on Friday.

The case has been linked to the women who flouted quarantine after a trip to Melbourne, roaming across Brisbane while possibly infected.

The sunshine state on Saturday imposed tighter border restrictions, adding visitors from greater Sydney to the banned list, along with all people from Victoria.

Adelaide is set to receive 170 people on Saturday on a repatriation flight from India, with all going into hotel quarantine. Officials are expecting at least some to have COVID-19.

South Australia also recorded a new case of COVID-19 on Saturday – a man aged in his 20s who had returned from interstate and has been in quarantine.

The Northern Territory has reported one new case of coronavirus – a woman who travelled from Melbourne.

Victorian anaesthetists are calling for ‘fit testing’ of personal protective equipment, citing concerns that not enough is being done to protect health workers from coronavirus.

Three doctors are reportedly among those in intensive care as the state struggles to contain the virus.

And as hospitalisations grow in the state, the level of infection risk and the effectiveness of PPE is worrying many.

Anaesthetists are commonly called on to intubate patients needing help to breathe, and so they are among those face-to-face with the most severe COVID-19 cases.

The Australian Society of Anaesthetists says it has made “numerous approaches” to federal and state health departments asking that fit-testing of PPE become mandatory in all hospitals.

Fit testing involves checking whether airborne particles can penetrate an N95 mask and other safety gear.

One method involves spraying a solution at the face, which if able to be smelled or tasted, means the mask has failed.

Melbourne anaesthetist Bob Cox said the astronaut-like suits worn by overseas doctors are better because they don’t obstruct vision and are more comfortable.

“At the moment we’re using equipment that is totally disposable but it has its limitations in that it may not be as safe,” Dr Cox said.

“To have doctors ending up in intensive care on ventilators is not good, let alone anyone else.”