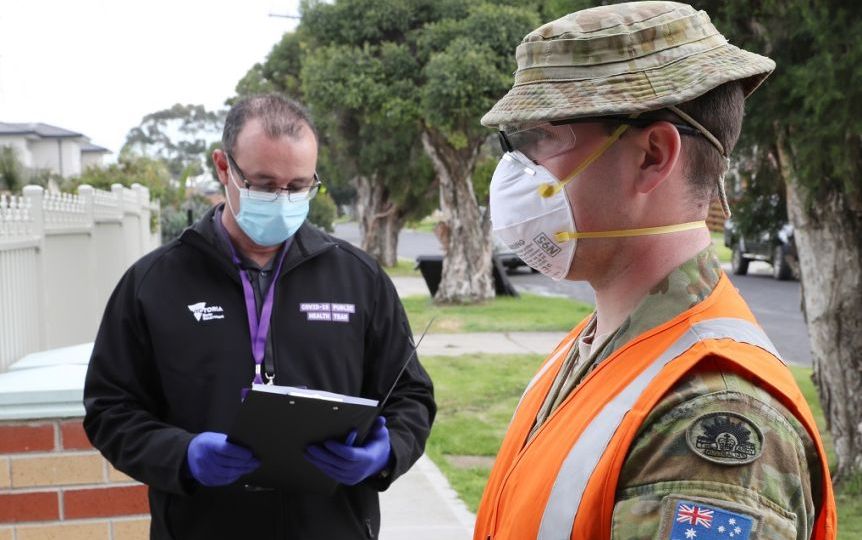 One in four people who were told to isolate after testing postive to COVID-19 in Victoria weren't home when authorities checked. Photo: AAP

Victorians defying stay-at-home orders by leaving their homes while infected with COVID-19 are putting the nation at risk, leading public health experts have warned.

On Friday, Victorian Premier Daniel Andrews revealed that one in four people who had tested positive for the coronavirus had flouted health orders and gone out while infected.

At least 100 have been referred to police.

“Disappointingly, I have to inform you that there were more than 130 unsuccessful visits, so around one in four people could not be found at home,” Mr Andrews said.

Australia’s leading health officials slammed the behaviour as “irresponsible”, saying it could mean the state’s strict lockdown drags on much longer.

“If you have it, that means you don’t take a step outside the house. It’s exactly what you don’t want to be happening.”

If the virus were allowed to run rampant, each person infected with COVID-19 would spread it to 2.5 people on average, but ‘super-spreaders‘ can potentially infect many more, Dr Vally explained.

“An individual who either goes out and mixes with lots of people or happens to be shedding a lot can infect hundreds of people,” he said.

These are situations you don’t want occurring in a pandemic.”

It is crucial that people who test positive to the virus stay inside for the full two weeks, even if they feel better, explained Catherine Bennett, the chair of epidemiology at Deakin University.

“It is a real worry,” Professor Bennett said.

Breaking isolation early is “very risky” , and people who do so “could be taking [the virus] back into a workplace”, she said.

They may be thinking they’re being careful and have no symptoms. That’s the wrong thinking. You can’t be careful enough.”

In some cases, just one infected COVID-19 patient has caused huge cluster to break out.

In March, a woman in South Korea, known only as patient 31, ignored a doctor’s warning to get a COVID-19 test when she had a fever, ate a buffet lunch at a hotel, went to church, and subsequently infected hundreds of people.

Bill Bowtell, a strategic health policy adviser and adjunct professor at the University of New South Wales, said the Victorian outbreak was being made worse by ineffective communication, politicisation, and inadequate financial incentives.

“If people are not taking it seriously it’s because the communication has not been effective enough,” Professor Bowtell said.

“I think when you have widespread, seemingly widespread, reluctance to do the right thing, its because people do not understand the gravity of the situation.”

There has also “a concerted political campaign to undermine the nature of the absolute need to restrict the transmission of the virus in the second lockdown,” he said.

“This is having obviously a detrimental effect of community mobilisation that is necessary to reduce numbers.”

Finally, “there is still more need to be creating the right financial incentives”.

Scott Morrison is under increasing pressure to fund a federal leave scheme to pay workers who have to isolate after a positive COVID-19 diagnosis or are awaiting their test results.

Currently, workers with symptoms are “the biggest driver of transmission” in Victoria.

To try and curb this, Victoria is making $300 payments to people who miss work while awaiting test results and $1500 for workers who test positive.

But there are growing calls for a nationwide scheme that is directed at all workers, with Labor leading the charge.

“It should have been introduced months ago.”

‘Irresponsible’: One in four COVID-positive Victorians are flouting isolation