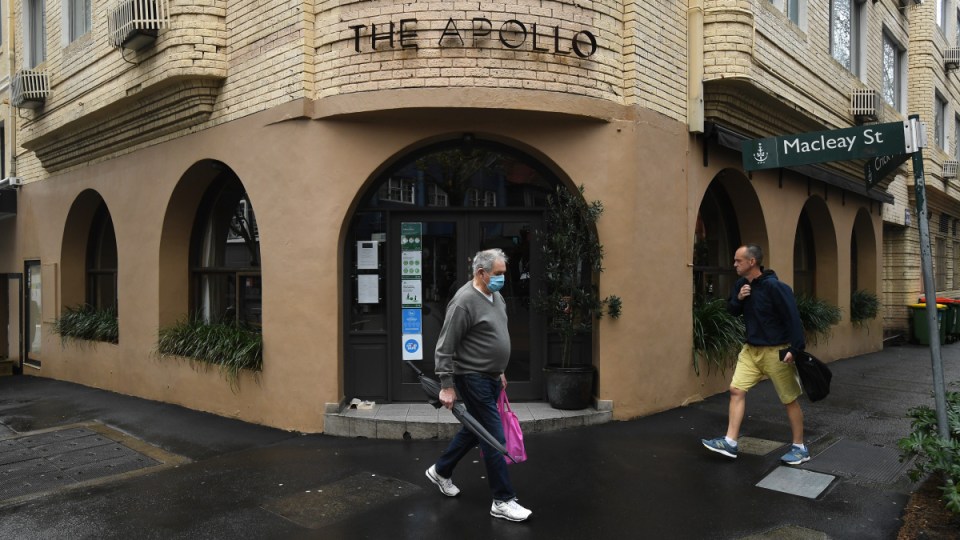 There are several coronavirus cases linked to The Apollo Restaurant. Photo: AAP

It came as at least four more venues were added to the list of Sydney pubs, clubs, restaurants and cafes attended by people with the coronavirus.

Harpoon, and Hotel Harry in Surry Hills, Matinee Coffee in Marrickville and Tan Viet in Cabramatta have all been closed for cleaning and contact tracing.

Darlo Bar in Darlinghurst on Thursday night also confirmed it was frequented on July 26 by someone who has since tested positive to COVID-19. The bar will be closed for cleaning and reopen on Saturday.

There are now 102 active cases being treated by NSW Health. Eight people are in intensive care, and four are being ventilated.

Of the new cases, six are linked with The Apollo restaurant in Sydney’s Potts Point.

Three were traced back to the Our Lady of Lebanon Cathedral’s outbreak, while two were linked to funeral gatherings.

Health authorities said two infections remained under investigation, while one case is linked to a known infection without a determinable source.

She reiterated that despite the legal 20-person cap in NSW on indoor and outdoor gatherings, people should limit gatherings to 10 people.

“Think twice about having those gatherings up to 20 and minimise your contacts with others and minimise social events and movements just at this period while we’re putting out spot fires.”

The uptick in Sydney cases has prompted Queensland to ban all Greater Sydney residents from entering the state from Saturday.

Meanwhile, the Australian Border Force has denied a report that one of its officers allowed Ruby Princess cruise ship passengers to disembark in Sydney in the mistaken belief they had tested negative to COVID-19.

The ABC’s 7.30 program on Thursday claimed a senior ABF officer allowed 2700 people off the Ruby Princess, thinking they were clear of the coronavirus when they had only tested negative to the common flu.

In a statement, the ABF said its responsibility does not include preventing disembarkation of passengers or crew for health reasons.

“Any misinterpretation by ABF officers of test results did not make a difference as to whether passengers were cleared to disembark the Ruby Princess … human health is not the responsibility of the ABF,” it said.

The Ruby Princess, which docked at Circular Quay on March 19, has been linked to hundreds of COVID-19 cases and more than 20 coronavirus-related deaths.

Public hearings of a NSW inquiry into the incident have concluded, with Commissioner Bret Walker SC to report back by mid-August.

On Friday, Dr Chant declined to confirm the ABF had made such an error.