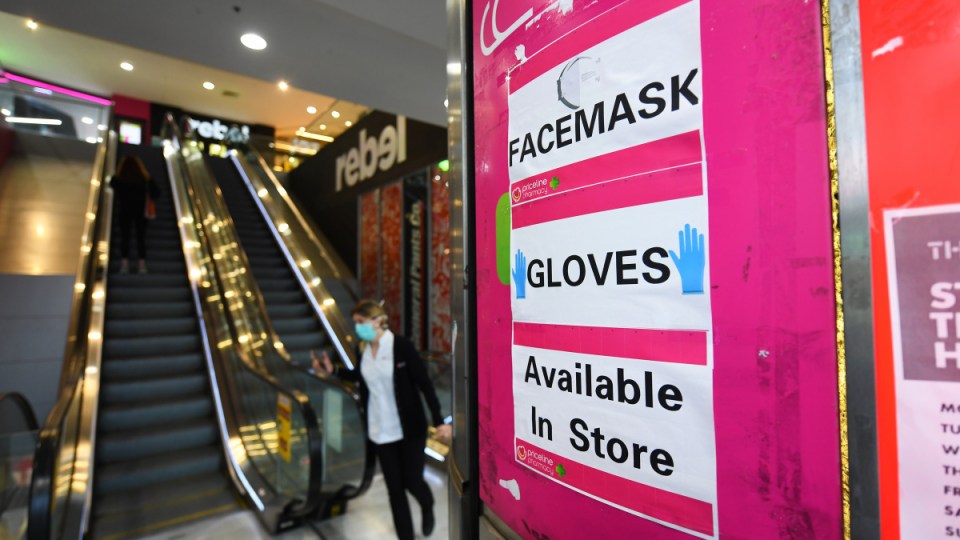 The entrance to a Melbourne shopping centre on Monday. Photo: AAP

Victorian health authorities have announced a record rise in new coronavirus infections and two more deaths as the state battles its growing outbreak.

Premier Daniel Andrews confirmed 484 new infections on Wednesday – the worst daily tally for any state or territory since the pandemic began.

Worryingly, Mr Andrews said, data showed huge numbers of Victorians ignoring health orders – 90 per cent of people tested between July 7-21 did not self-isolate between the time they first felt sick and having the test.

More than half did not self-isolate while waiting for their test results.

“People who have symptoms, enough symptoms to go and get a test, which is great – that’s exactly what we want,” he said.

“The mere phrase ‘waiting for your test result’ means just that. You should be waiting for the result, not continuing on as if you hadn’t had a test or didn’t have any symptoms. It’s very simple.”

He repeated that self-isolation was the only option until test results came back.

“Unless we have people who get tested staying at home and isolating until they get their results, then we will not see these numbers come down,” Mr Andrews said.

“They will continue to go up and up. And a six-week shutdown will not be for six weeks. It will run for much longer than that.”

Aged-care facilities remain among the most concerning areas in Victoria’s outbreaks. They have hundreds of active infections.

Meanwhile, six Victorian prisons are in lockdown after an officer tested positive for COVID-19.

A Department of Justice spokeswoman said the officer had been self-isolating since July 16 after being notified they were a close contact of a positive case.

Regional outbreaks are another worrying area where infections are surging. One in Colac, about 150 kilometres south-west of Melbourne, has grown to 27 people.

Thirteen of those cases are linked to Australian Lamb Company, while a student at the town’s Trinity College also tested positive.

“People are worried, people are anxious but on the positive side, people have locked themselves away,” Trinity College principal Paul Clohesy said.

The school has returned to remote learning until August 3.

“That’ll give 14 days to see where this virus spreads in Colac and to make sure we aren’t opening and having to close again.”

There have also been concerns in the state’s far east, where a 25-year-old Melbourne woman visited several shops at the weekend while awaiting results of a COVID-19 test.

The woman, from the Melbourne suburb of Glen Waverley, later returned a positive result. That prompted the closure of stores in Orbost and nearby Marlo for deep cleaning and contact tracing.

“I just can’t understand these people, they’re such a small minority affecting the majority.”

More than 60 people have been fined for breaching Melbourne’s coronavirus lockdown restrictions, including someone who travelled more than 100 kilometres to go surfing.

From Thursday, residents of metropolitan Melbourne and Mitchell Shire must wear a face-covering in public or risk a $200 fine.