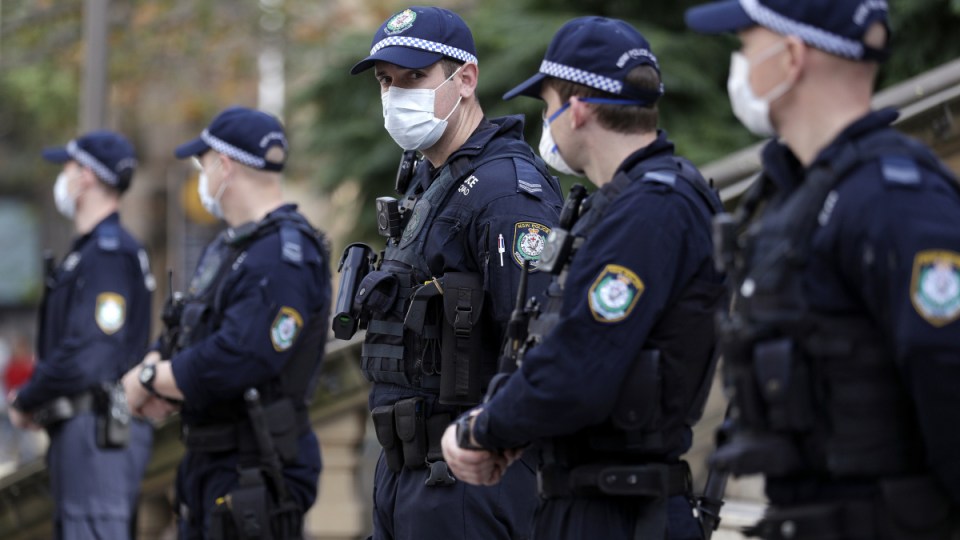 Police will be out in force to make sure Victorians follow the letter of the lockdown laws. Photo; AAP

About $60,000 in fines will be issued to guests of a Sydney house party that breached NSW’s coronavirus restrictions on gatherings.

Police broke up the party attended by more than 60 people on Nottingham Street in Schofields about 11.30pm on Saturday after complaints of a noisy party.

Officers used pepper spray when a brawl involving 15 people erupted inside the home.

Thirty people were arrested for refusing to move on and police said they intend to issue up to 60 people with COVID-19-related infringement notices of $1000.

Gatherings are currently restricted to not more than 20 people in both outdoor settings and within a home.

It comes as NSW reported 15 new COVID-19 cases on Saturday as two more venues joined the growing list of places to host guests who have tested positive.

Of the new cases in the 24 hours to 8pm on Friday, five are connected to patrons who attended Casula’s Crossroads Hotel in southwest Sydney.

That cluster now numbers 45 people, 30 of which were not hotel patrons.

One case, reported on Friday afternoon, was linked to a developing cluster at Thai restaurant Thai Rock in Wetherill Park.

Four cases are returned travellers in hotel quarantine, while another five remain under investigation by contact tracers.

Two of those cases include a pair from the same household who visited a bistro at Batemans Bay on Monday and a fast-food restaurant in the Shellharbour area on Wednesday.

People who dined at the Batemans Bay Soldiers Club bistro between 7 to 9.30pm that evening are being asked to self-isolate for 14 days, while patrons at McDonald’s Albion Park between 2pm to 2.30pm should monitor themselves for symptoms.

One additional case was also recorded after 8pm. It is linked to Planet Fitness at Casula, the sixth infected individual to attend the gym on July 8.

“We are at a crucial point in the fight against COVID,” NSW Deputy Chief Health Officer Jeremy McAnulty told reporters.

“It remains a very active number of cases in NSW and Victoria.”

Mr McAnulty said the Thai Rock and Crossroads Hotel cases were “closely related in geography and time” but possible contact crossover had not been established yet.

With a third COVID-19 case linked to the western Sydney Thai restaurant, patrons who visited the venue from July 9 to 14 have been ordered to get tested and self-isolate for 14 days regardless of symptoms.

NSW Health is yet to confirm the source of the outbreak, with the latest case coming from a customer who dined at the restaurant on July 10.

Mr McAnulty said a number of people from the freight company connected to the Crossroads Hotel cluster had visited Stockland Mall where Thai Rock is located.

Tougher restrictions on pubs, hotels and hospitality venues came into effect from Friday and authorities are warning the public to remain vigilant this weekend.

“The concern recently is that we have become complacent. We think it’s OK to gather around, come together, but it’s not,” Dr McAnulty said.

“We’re still at risk. What’s happening with all these cases is we need to make sure all these measures are in place to protect us all.”

Police to slap $60,000 in fines on guests of house party that breached NSW gathering limits