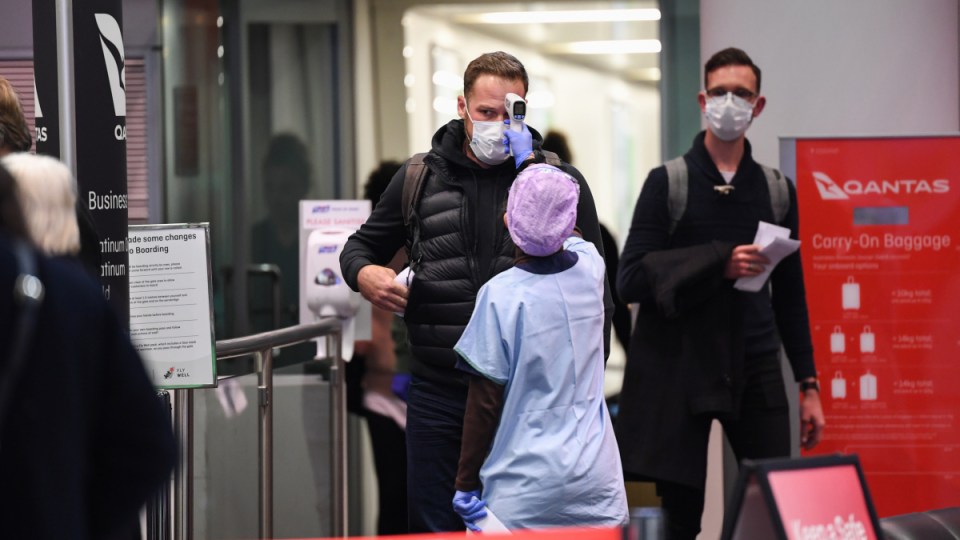 Passengers arriving from Melbourne have their temperature checked at Sydney airport. Photo: Getty

Treasurer Josh Frydenberg is also reassessing the future of the JobKeeper and JobSeeker welfare programs, which are due to expire in September.

“There is going to be another phase of income support,” he told the Seven Network on Wednesday.

Victorian Premier Daniel Andrews is confident the pandemic payments will be extended, saying Prime Minister Scott Morrison understands there will be more hardship and pain in his state.

“I’m confident there will be support there,” he told the Nine Network.

New lockdown measures across Melbourne will cost the economy up to $1 billion a week.

“This is a serious impediment to the speed and the trajectory of the nation’s economic recovery, not just Victoria,” Mr Frydenberg told Sky News.

The Treasurer will release an economic update or “mini budget” on July 23.

The update will be released alongside a review into JobKeeper and JobSeeker payments.

Shadow treasurer Jim Chalmers said the Victorian outbreak and subsequent six-week lockdowns of millions of people in metropolitan Melbourne and one regional Victorian shire must be taken into account.

“This outbreak and these necessary new restrictions come with even more uncertainty for businesses and their workers, making the case for clarity on the future of JobKeeper even more urgent,” he said.

“Scott Morrison has only added to the uncertainty by delaying the release of his secret JobKeeper review.

“The government should better target and taper support, but shouldn’t turn off the tap when businesses are struggling with new restrictions.”

Hundreds of thousands of customers have paused repayments on loans throughout the pandemic.

Banks are offering to extend the six-month deferrals for another four months, but only for customers who genuinely need emergency assistance.

“Banks are pledging to make sure that no customer falls off a cliff at the end of that six months,” Australian Banking Association chief executive Anna Bligh told ABC radio.

“Where the customer is unable to pay anything because they’re still affected there will be an extension of another four months.”

Melburnians will be forced back into lockdown from midnight on Wednesday, after the city experienced weeks of rising coronavirus infections, including a record 191 new cases on Tuesday.

Banks step in, JobKeeper reassessed as Melbourne locks down