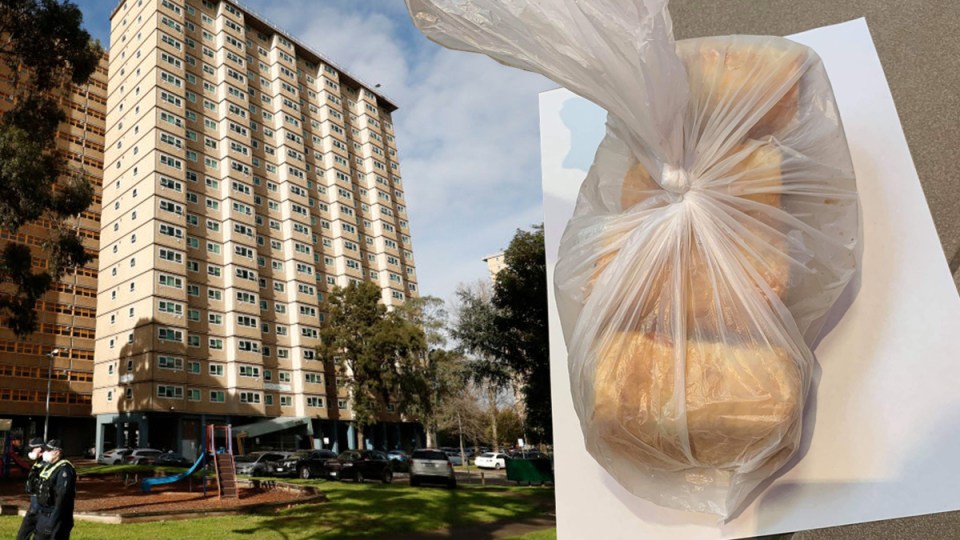 Four sausage rolls in 48 hours: As of 4.30pm on Monday, that was the only food delivery a Melbourne mother and her six-year-old son had received since Saturday afternoon, when their public housing block was brought under sudden lockdown.

The pair is among thousands of residents trapped inside nine Flemington and North Melbourne public housing estates until at least the end of the week amid a spike in cases.

Authorities have also ordered the closure of the border between NSW and Victoria from midnight Tuesday in a move industry representatives fear could stall economic recovery and spark chaos.

Meanwhile a pop-up testing clinic will open in the border city of Albury from Tuesday following two suspected coronavirus cases in the area, with one person recently returned from Melbourne.

Victoria reported 127 new cases of the coronavirus on Monday and two deaths  – a man in his 90s and a man in his 60s – on the worst day yet.

Melbourne’s public housing towers have become the centre of a dramatic attempt to halt community transmission of COVID-19 but the hard lockdown has caused huge distress.

Catherine*, a resident in North Melbourne’s Canning Street flats, told The New Daily she said she “burst into tears” when she looked down and saw four sausage rolls in a plastic bag left on the floor outside her unit.

She did not want her real name published over fear of backlash from the Department of Health and Human Services.

“They didn’t even knock on the door to let us know,” she said.

“From 8am until now, I haven’t been given any more.”

Catherine also said a neighbouring vegetarian family had received meat pies, while others were given “what looked like dog food in a plastic bag”.

“One of my friends in Flemington said the Food Bank came, but some of the food had expired in 2019,” she said.

Another friend on Level 14 of her building was still waiting on paracetamol for her child, who was suffering a fever.

“The majority of people are crying,” Catherine said.

Better for some than others

It seems residents in other towers have been faring better.

Abdullah Safi is an Eritrean community leader who has friends and family inside Flemington’s public housing block at 12 Holland Court.

Speaking to The New Daily from outside the towers on Monday, he said he watched food trucks and not-for-profit organisations dropping off plenty of supplies.

“Today was different – there were so many organisations,” he told The New Daily.

He said his 75-year-old mother-in-law, a resident in the towers, had faith the Victorian Government was trying to do the right thing by residents.

“She said: ‘The government knows better, so if they’re doing it to protect us, then why not?'” Mr Safi said.

But more needed to be done to help non-English speakers understand the situation, he added.

“There should be more information and follow-ups, and checking they’re applying social distancing and everything,” Mr Safi said.

Residents in towers who need access to support and assistance should call the Government’s Housing Call Centre on 1800 961 054.

A major employer group has warned a “Berlin Wall” between Victoria and NSW will severely hamper Australia’s economic recovery.

Federal MPs and senators based near the border have also raised concerns, with Nationals accusing state governments of punishing regional communities over the Melbourne outbreak.

Defence force personnel will be deployed to assist police as they monitor 55 border crossings which include bridges, rivers and bushland.

“The border closure puts up a Berlin Wall between our two biggest states which represent more than half our national economy, and cuts in two our country’s main economic artery,” he said.

“What is required is focused strategy that is community and hot-spot based and not based on arbitrary borders that split communities.”

Albury-Wodonga has Australia’s only cross-border health service, with cancer treatment and dialysis on the NSW side and a maternity unit at the Victorian campus.

Independent MP Helen Haines, who is based in Wodonga, said locals needed certainty that health care and business wouldn’t be affected.

“I don’t want to hear of one case where someone on one side of the border is not able to access critical health care on the other because of a health crisis,” she said.

Nationals senator Bridget McKenzie, whose office is in Wodonga, criticised the “one size fits all” approach of shutting down the borders.

Business Council of Australia chief executive Jennifer Westacott said it was “an extreme measure” but hopefully a temporary one.

‘I am not afraid’: The modern unknown soldier risks it all in Ukraine
Energy market reform will be a big boost for emissions reductions: Chris Bowen
Greens sign up for Labor’s looming jobs-and-skills summit as Liberals stick with boycott
Joe Biden’s $430b green victory for the environment
China cementing its Thailand ties with joint military exercises
NRL: Titans frantic to end 10-game losing streak as Manly showdown looms
The Trump Bump: Enormous surge in scripts for hydroxychloroquine
Today's Stories