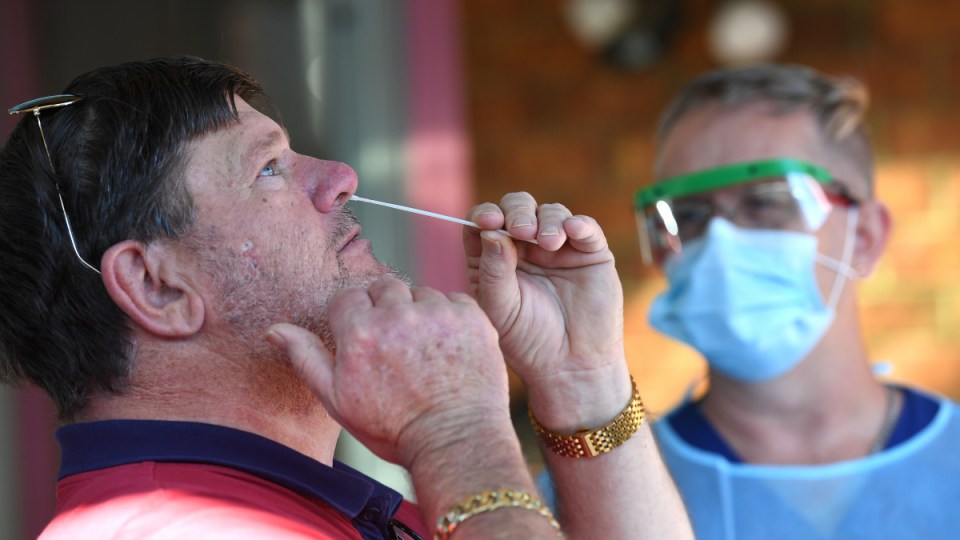 A Victorian man performs his own coronavirus test after developing symptoms. Photo: AAP

Global cases of the coronavirus are approaching 11 million, which is more than double the annual number of severe flu illnesses, according to the World Health Organisation.

As Victoria grapples with its own outbreak, a number of countries are facing resurgences of the virus, forcing authorities to reinstate lockdowns in what could be the new pattern of life.

The United States has again shot to a new daily global record, with more than 55,400 new COVID-19 cases on Thursday (local time), leading the global tally.

Latin America, where Brazil has 1.5 million cases and is second to the USA, now makes up almost a quarter of the global total of people infected.

Russia rounds out the three most infected countries, with 666,941 cases while India has become the new epicentre in Asia, rising to 625,000 cases.

The pandemic has now entered a new phase, with India and Brazil battling outbreaks of more than 10,000 cases a day, putting a major strain on resources.

Worldwide, there have been more than 520,000 fatalities linked to the disease so far, roughly the same as the number of influenza deaths reported annually.

More than 10,000 Victorians have refused to undergo testing amid a Melbourne testing blitz, with some people questioning the truth behind COVID-19.

The state’s health minister Jenny Mikakos said some people believed the virus was a conspiracy theory or that it wouldn’t impact them and declined to be tested.

Victoria was the only state to record new cases on Friday, with 66 new instances of the coronavirus as lockdown measures were reinstated across ten Melbourne postcodes.

Authorities are keeping a sharp eye on Melbourne’s coronavirus outbreak for signs case numbers may be stabilising.

“The figures are showing some signs of stabilisation but it is too early to confirm,” he told reporters in Canberra.

“We hope they have, given the level of testing and contact tracing under way but we need to follow up for a few more days.”

Victoria’s hotel industry has slammed the state government for a “failure of process” over the bungled returned travellers quarantine program.

The Accommodation Association said the government should own up to its failings, fix the mess and apologise to hotels.

Genomic sequencing has revealed a big proportion of the latest coronavirus cases in Victoria were due to infection protocol breaches in hotels hosting returned travellers.

“These hotels stepped up to do their duty and then to be absolutely cast out to sea the way that they have by this government is really disappointing, it undermines the confidence in the relationships we’ve built,” AA CEO Dean Long told AAP.

“We trusted the government to run a good program and that appears not to be the case.”

Mr Long said the accommodation industry did not manage these sites, instead that fell to the state government.

“This is effectively an example of a failure of process … and it is leading to a failure of leadership,” he said.

“These sites in the city have been nationalised, turned over to the government who have appointed the staff and the processes, and then to blame an industry for the government’s own failure is disturbing.”

The program has become such a thorn in the government’s side that a judicial inquiry into the program was announced on Thursday.

Hotels under scrutiny such as Rydges on Swanston and the Stamford Plaza Hotel said that they did not hire the security staff.

Victorian Premier Daniel Andrews ducked questions on Friday about who authorised the hiring of outside security guards and how that decision was made.

Britain will end coronavirus quarantines for people arriving in England from more than 50 countries including Australia, the government says.

The move, effective July 10, clears the way for millions of British tourists to take northern summer holidays without worrying about being quarantined when they return.

The government said it expected countries included on the quarantine-free list to reciprocate by relaxing their own restrictions.

Countries excluded include the United States, China, India and Russia.

Those arriving from higher risk countries will still have to self-quarantine for 14 days under a rule which has angered airlines and travel companies.

Prime Minister Boris Johnson’s government had debated for days how to ease the quarantine rules.

Scotland, Wales and Northern Ireland, which set their own health policies within the United Kingdom, have not announced plans to lift the measures.

The move to ditch the quarantine prompted three of Europe’s biggest airlines, British Airways, Ryanair and easyJet to end a legal challenge against the government.