Cafes, gyms, libraries and cinemas in parts of Victoria are shutting their doors again as dozens of suburbs home to hundreds of thousands of people prepare to for another month in lockdown.

Police are also preparing to station officers at Melbourne suburb borders and on main roads, similar to booze bus set-ups, while prison security guards will be brought in to help monitor people in quarantine.

The escalation in control measures comes after authorities detected an “unacceptably high” number of coronavirus cases in parts of Melbourne.

Those in hotspot areas are waking up to their last day before stay-at-home orders are reintroduced at least until July 29.

They are being told to “assume you may be infectious – and act accordingly”.

The news is far brighter in other states, where tourism operators are celebrating the expected return of tourists.

From July 10, all visitors except those from Victoria will be welcome to cross Queensland and South Australia’s borders.

Victorians will not be allowed to freely cross into those states, regardless of whether they live in one of the coronavirus hotspots.

All visitors will have to fill out declaration forms stating they have not been to Victoria in the 14 days prior to their arrival in Queensland. Anyone caught lying faces a $4000 fine.

And, for a fortnight, all flights into Melbourne will be diverted to other cities, as a former judge begins an inquiry into the hotel quarantine program.

“That is an unacceptably high number and one that poses a real threat to all of us,” Premier Daniel Andrews said on Tuesday after 64 more cases of COVID-19 were uncovered.

From 11.59pm Wednesday (July 1) until at least July 29, people in 10 postcodes will only have four reasons to leave their homes: for work or school, for care or caregiving, for exercise, or to get food and other essentials. 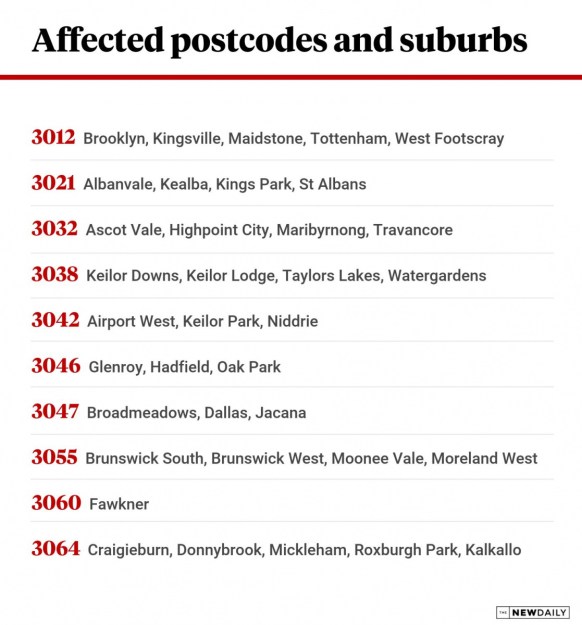 Businesses and facilities in these areas that recently reopened – including beauty parlours, gyms, libraries and swimming pools – will have to close. Cafes and restaurants will be open only for takeaway and delivery.

Mr Andrews said testing had found a “significant number” of cases in late May and early June that could be linked to a breach of infection control protocols by staff at the hotels.

The quarantine program will restart under the supervision of Corrections Victoria.

“The actions being taken by the Victorian government will save lives,” he said.

He said the level of COVID-19 testing in Victoria in recent days – with nearly 100,000 tests done since last Thursday – was “exceptional and unprecedented”.

NSW had five new virus infections on Tuesday while Western Australia had two, both overseas travellers.