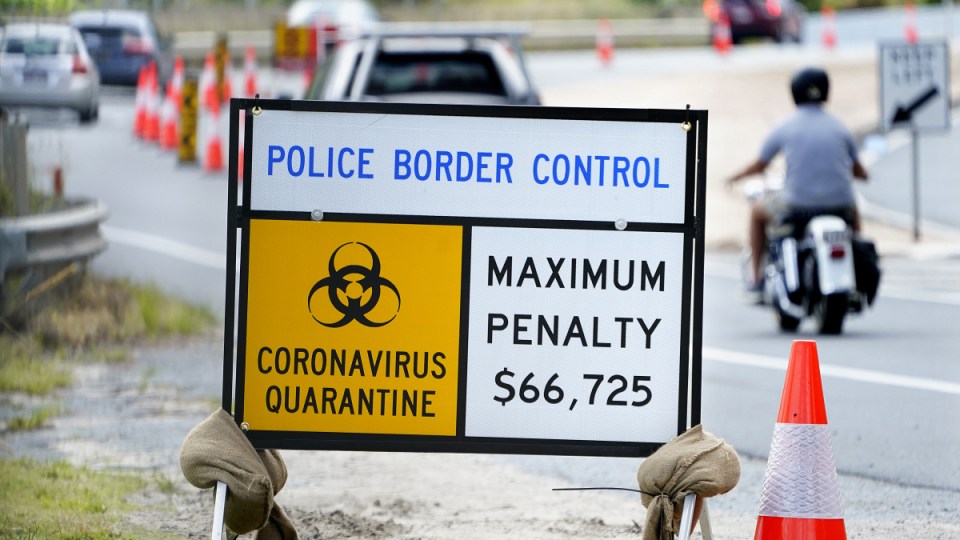 The border checkpoints between NSW and Queensland are irksome but essential, top doctors say. Photo: AAP

Australians are overwhelmingly in favour of remaining within their own state – and keeping others out – as the nation gets ever closer to achieving zero new infections.

All but one state had no new cases of COVID-19 on Saturday among thousands of tests undertaken in clinics around the country.

Victoria was the lone state to detect more of the coronavirus, with 11 new cases, three of which were linked to a school cluster and four to a Melbourne hotel where returned travellers are being quarantined

Queensland had zero cases on Saturday as did NSW after completing 9500 tests as it gears up to reopen pubs, beauty salons and museums from Monday.

Also from Monday, Victorians will regain the simple pleasure of sitting down in a cafe or visiting libraries, galleries, museums, amusement parks, places of worship, beauty clinics, nail salons and massage parlours – with no more than 20 people.

Australia continues to record far few cases than comparable nations with the death toll at 103 in stark contrast to the US passing 100,000 this week.

However, a new survey by the Australia Institute suggests more than three quarters of Australians support states closing their borders to interstate travel.

“The strong support for state border closures shows that while there is much public relief with some public health restrictions lifting, there is also still much community concern regarding the spread of COVID19,” the institute’s executive director Ben Oquist said.

NSW is allowing holiday travel inside state boundaries from Monday while Victorians will be permitted to stay in holiday homes and attend tourist accommodation such as caravan parks and camping grounds.

Queensland Premier Annastacia Palaszczuk is on Sunday expected to give the green light for residents to holiday within the state in time for the June school break.

Hundreds of anti-vaccination protesters have defied social-distancing measures at rallies across Australia.

Protesters claiming the COVID-19 pandemic was a “scam” gathered at the Royal Botanic Gardens in Melbourne on Saturday, and carried signs declaring they were against vaccines and 5G technology.

Their placards stated “5G = communism”, “COVID 1984” and “our ignorance is their strength”.

They booed police – clad in gloves and face masks – who warned the crowd they were breaching social-distancing rules designed to slow the spread of coronavirus.

In a statement, police said those found in breach of COVID-19 directions faced fines of $1652 each.

In Sydney, up to 500 protesters voiced conspiracy theories regarding not only vaccination, but also 5G telecommunication networks, fluoride and large pharmaceutical corporations.

The group convened at Hyde Park in the CBD before holding a singalong of anti-vaccination songs and walking to NSW Parliament House.

They chanted “freedom of choice” and “my body, my choice” on the march, with some attempting to raise the spectre of a “new world order”.

The walk passed without incident or police intervention.

When asked about the protests, Victoria’s Chief Health Officer Brett Sutton said “there’s no message that can get through to people who have no belief in science”.

“There’s probably no reaching them,” he earlier told reporters.

Australian federal Labor is “deeply disappointed” by Donald Trump’s decision to terminate the USA’s relationship with the World Health Organisation (WHO).

While saying there was considerable room for improvement at the WHO, Labor said change would not happen by walking away.

“The Australian government should urge the United States to reconsider its decision and work with other member states to ensure adequate funding of the WHO to continue to perform its important role,” Labor’s foreign affairs spokeswoman Penny Wong and health spokesman Chris Bowen said in a statement.