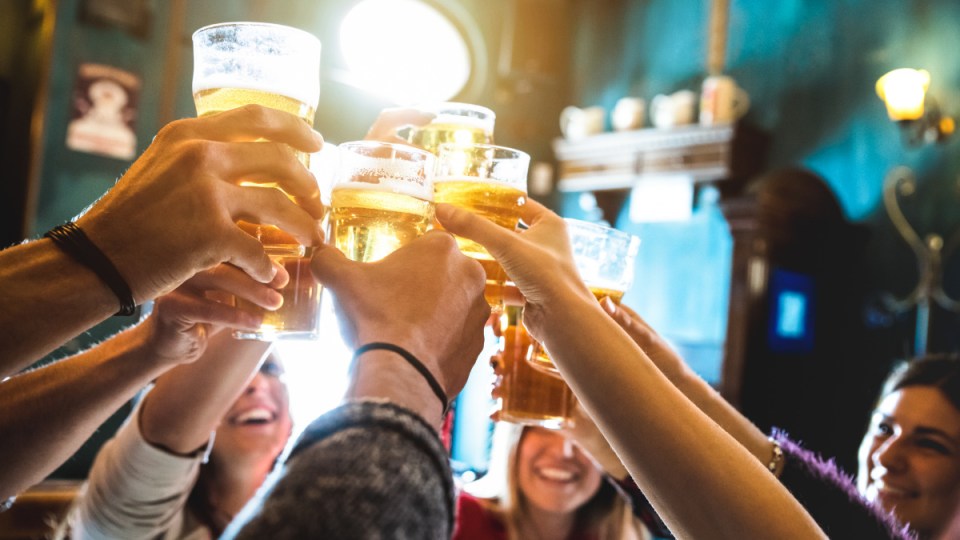 Australians have had fewer occasions to drink during the pandemic, resulting in huge losses for the alcohol industry.

Australia’s alcohol industry has nothing to cheer about after beer, wine and spirit sales suffered the worst month on record because of pandemic lockdown measures.

Despite an initial spurt of bottleshop panic buying, the closure of pubs, clubs and bars gave Australians few occasions to drink, with cider and beer experiencing the biggest volume drop.

The report by peak body Alcohol Beverages Australia said the sector was the most severely impacted by coronavirus and the loss of jobs and revenue had been “crippling”.

While bottleshops had offered a “lifeline” to the industry, it was not enough to make up for the massive decline in sales of beer, wine and spirits.

“Our sector has been the most severely impacted by the coronavirus pandemic as lockdowns and social distancing forced the closure of pubs, bars, clubs, and restaurants,” said Alcohol Beverages Australia chief executive officer Andrew Wilsmore.

“We knew that the total loss of trade from pubs, bars, clubs, and restaurants was never going to be made up for by a brief, small surge in panic buying during the week people were concerned bottleshops would also close.”

Cider sales suffered the biggest decline with a 61 per cent drop in volume while beer fell 44 per cent “due to the loss of social occasions”.

Small and medium sized wine producers who rely on restaurants also reported losses of up to 70 per cent.

Meanwhile, local distillers witnessed revenue declines of up to 80 per cent, with the shutdown of regional tourism adding to the tale of woe.

“We call on our political leaders to have a laser-like focus on job creation and minimising regulatory and tax burdens as we come out of this crisis,” said Mr Wilsmore.

“This will be vital to our successful revival so that we can continue to provide employment opportunities and future careers for young Australians.”

The Alcohol Beverages Australia report comes as NSW prepares to allow up to 50 people in restaurants, pubs and cafes in June, with a warning to young people to behave when going out again.

“As we’re freeing up our restrictions, particularly around clubs and hotels and so on, we need a very powerful message and reminder to the fact that these young people who may think they are invincible are actually not,” Mr Hazzard said.

Victoria remains on track for pubs, restaurants and cafes to open to limited numbers from June 1.

Meanwhile a Darwin pub was issued a warning by Northern Territory Police for failing to comply with coronavirus regulations on Friday night, while another voluntarily shut its doors after being “overwhelmed” by patrons.

Another Darwin venue said in-house coronavirus safety measures were not working or proving difficult to manage, the ABC reports.

“The restrictions, I don’t know how well thought out they were. We do our best to follow them and we encourage our patrons to follow them,” said Matt Mulga, owner of Lola’s Pergola in Cullen Bay.

The Australian coronavirus death toll has risen to 102 after a Victorian man in his 60s died in Victoria.

It is not yet known how the man contracted the illness. His death brought the state death toll to 19 on Saturday.

Victoria’s confirmed COVID-19 cases rose by 10 on Saturday, four of which were detected in returned overseas travellers in hotel quarantine.

Three cases were picked up through community testing, three others are being investigated and another was reclassified.

None of the new cases are linked to the Cedar Meats outbreak in Melbourne west, responsible for 111 cases.

All were overseas acquired – two from Pakistan and one from the USA – and were already in hotel quarantine.

Fans of Australian rock band Powderfinger had no need to get off the sofa when the band gave its first concert in a decade to raise funds for those in the music industry affected by the coronavirus pandemic.

The five musicians were performing remotely from different locations.
From an empty hall in Brisbane, bassist John Collins encouraged fans to donate to Support Act, an Australian charity that gives crisis help to artists, crew and music workers.

Lead singer Bernard Fanning told the more than 86,000 viewers it was a “pretty strange time”.

“Lots of us are experiencing all sorts of different difficulties,” he said.

“If you know you’re struggling with your mental health, it may be the first time this has ever happened, that you’ve felt like this, seek support.”

Confession: I hate live streams – but this puts everything else to shame. It’s being directed brilliantly #powderfinger pic.twitter.com/lgGqPdkkjC

The band played seven hits including These Days and My Happiness.
Powderfinger’s last gig was in November 2010.

-with wires and ABC