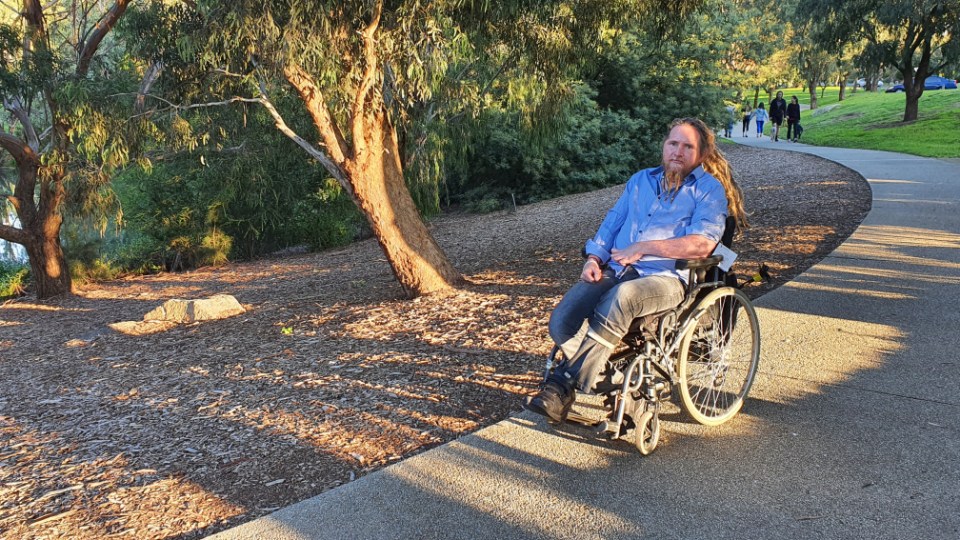 Geoff Toomey says he's been stopped from exercising and seeing care workers to help him recover from brain injury. Photo: The New Daily

Disability care providers have been accused of locking up vulnerable Australians under “excessive” COVID-19 rules.

The New Daily can reveal police have intervened to stop “out of control” restrictions, and authorities are investigating after multiple organisations were accused of going beyond state public health orders in restricting people with disabilities living in group homes and hostels.

Advocates and families report distressed residents being locked in their rooms and others living “anxious and scared” in shut-down houses where it’s claimed clients have been stopped from going out to exercise, work or see health professionals.

“We’ve been hearing of residents with distressed behaviours locked in their bedrooms 23 hours a day, of people not allowed to leave the house for exercise,” said Villamanta Disability Rights Legal Service casework lawyer Naomi Anderson, labelling the measures “excessive” and “a breach of human rights”.

Shutdown measures across Australia have been intended to limit the spread of the coronavirus, but interpretations of health orders have put some people at risk in other ways.

Melbourne resident Geoff Toomey, who has an acquired brain injury, said his residence put a stop to much of his care plan.

Healthscope Independence Services limited visits from support workers employed by other agencies to an hour a day.

It meant that Mr Toomey could not complete about two thirds of the medically designed skills and activities which usually take place in his home.

To make matters worse, the Toomey family had to resort to calling police after Healthscope refused to hand over Mr Toomey’s car keys so he could go to exercise in a nearby park.

Mr Toomey said the restrictions were “out of control”.

His father Mark said Healthscope had “arrogantly trampled on Geoff’s human rights, causing extreme stress for him (and) … for me as his primary carer”.

The New Daily has confirmed that after the NDIS Quality and Safeguards Commission initiated an investigation into Healthscope’s measures, the company dropped its extra restrictions on May 12.

It has also apologised for withholding the keys.

A Healthscope spokesman said it had consulted authorities that supported its guidelines and added the organisation “always put the safety of all of our residents as a priority”.

In another case, a family member of a resident in a Tasmanian house said she was concerned about abuse occurring in a “shut off” home and that her relative’s phone calls indicated she was “anxious and scared”.

The provider, Mosaic Support Services, told residents’ families that visitors were “not permitted” despite Tasmanian coronavirus laws allowing up to two visitors in homes at that time.

Mosaic CEO Lynne Harwood said that because the disability sector had been “later to set guidelines”, Mosaic had developed “bespoke” measures modelled on those of the aged-care sector.

Many more people with physical or cognitive disability live in residential facilities and hostels.

Some providers argue they have a legal duty to impose additional limits because residents have medical conditions making them more vulnerable to COVID-19 – and because some residents struggle to understand social distancing requirements.

But families and residents are reporting some providers are taking rules too far.

In one South Australian case, emails show a provider decided foot treatments for residents with intellectual disability were “not … essential” despite a podiatrist warning residents would suffer “pain and wounds” without treatment.

The same provider also declared residents were “unable to attend employment” and “withdrew” them from a workplace without first consulting them or family members.

It was a similar story in Brisbane, where Queensland Advocacy Incorporated director Michelle O’Flynn said several city care hostels had unlawfully barred all visitors, advocates and support workers, and prevented residents from walking outside the building.

Other families said they wanted to speak up but feared they or their relative would be punished.

One “traumatised” New South Wales father said the care provider for his son’s group home had not allowed residents out of the house “at all”.

When he asked police for a “welfare check” on his son, the home evicted the young man.

A spokesman for peak provider organisation National Disability Services said it had been a “confusing time” and the sector was “working hard to keep infection rates low”.

He said providers needed to balance human rights with their duty of care obligations, relevant legislation and multiple official sources of directions and advice.