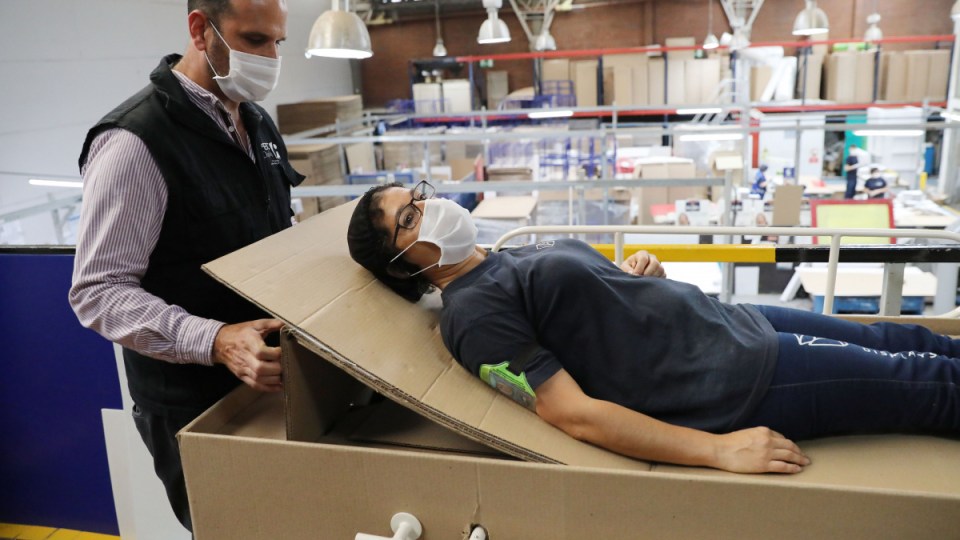 Rodolfo Gomez, left, shows how the hospital bed made of cardboard can serve patients with COVID-19. Photo: AP

A Colombian advertising company is promoting a novel if morbid solution to shortages of hospital beds and coffins during the coronavirus pandemic – a bed that rapidly converts into a coffin.

Bogota-based firm ABC Displays seeks to help both address the shortage of beds and facilitate the safe management of corpses.

The company’s manager, Rodolfo Gomez, pointed out that the bed is biodegradable, weighs 150 kg, costs about $US127 ($A198) – three times less than a normal one, and meets the requirements of comfort and functionality.

The cardboard bed has metal railings that designers say can double as a casket if a patient dies.

“We developed it because of the situation caused by COVID-19 in the world because we realised that there was a lack of hospital beds,” Mr Gomez said.

The company used to manufacture cardboard pieces for advertising, and made changes to be able to produce up to 300 beds a month and even export them, although it admitted not having received any orders yet.

The hospital beds manufactured by ABC Displays have a corrugated cardboard structure, railings and a reusable base.

They also have wheels to facilitate movement and can be disinfected thanks to a lacquer that covers the cardboard.

The product has a shelf life of six months.

Although the company hopes the patients who use the beds recover.

However, in case they succumb to the disease, the beds can be converted into coffins, allowing the corpses to be handled without touching it, thus reducing the chances of health personnel getting infected.

Mr Gomez recalled that while working on the design of the bed, they realised that in neighbouring countries such as Ecuador, there was a crisis in the management of corpses bringing them to incorporate a second use as a coffin.

“When we had made progress in the design, we realised what was happening in Ecuador, that they were taking their (dead) relatives to the streets and had no way of burying them, then it occurred to us that we could turn the bed into a coffin,” Mr Gomez said.

If required, the bed can be converted into a coffin by removing the railings and, by a manual procedure, the body is moved lower within the cardboard structure.

The company has been subject to criticism on social media over making the hospital bed convertible into a coffin.

However, the manufacturer claims it is a matter of seeing things from a different angle.

In his opinion, it was more distressing for the sick to be lying on the floor in overcrowded hospitals or relatives of the deceased being unable to bury them due to the unavailability of coffins or money to buy them.

He stressed their intention “is not to offend anyone” but to propose solutions to a real problem, due to the pandemic it is becoming impossible for the family to go to a funeral home and carry out a traditional burial.

Colombian company creates bed that can double as coffin