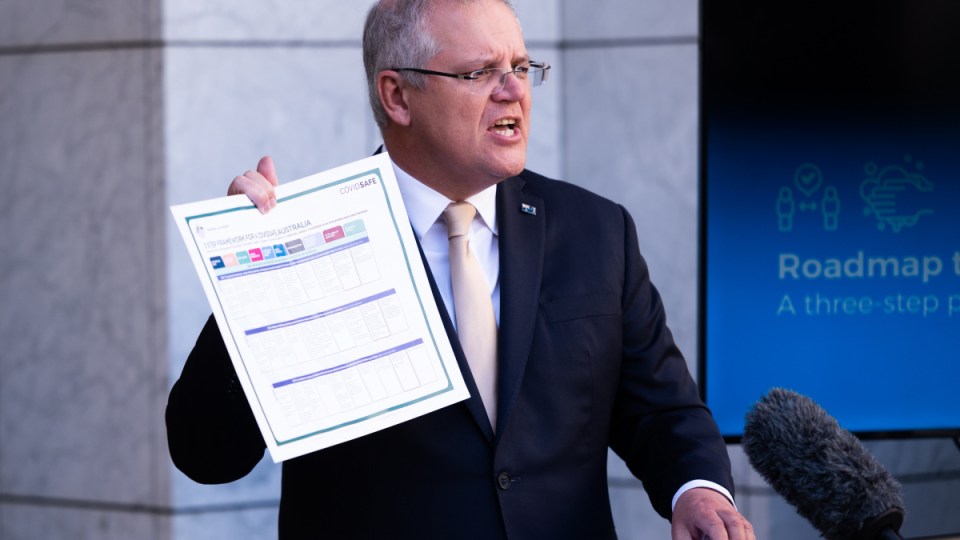 States and territories have moved swiftly to ease coronavirus restrictions after the Prime Minister’s announcement of Australia’s three-step “road map” to a new normality on Friday.

Within an hour of Scott Morrison’s announcement, Queensland and South Australia had outlined the first measures would relax, some within just days.

SA Premier Steven Marshall said outdoor dining at restaurants and cafes would return from Monday. University and TAFE tutorials will resume, while libraries and pools and churches will all reopen.

South Australia – which had no new coronavirus cases on Friday – will also allow 20 people at indoor funerals (30 at outside ceremonies) and non-contact sports will be able to resume training.

“We will be the only jurisdiction in the country which will be easing the ban on caravanning and camping,” he said.

“We are wanting people to get out and explore our beautiful backyard here in South Australia, spend some money in regional South Australia, and, of course, help those economies move forward and create jobs.”

“I know that Queenslanders want certainty and they want a clear path forward in terms of what they can do and when life can start returning back to some form of normality,” she said.

“Of course this is going to be gradual, it will take time and we cannot rush.”

Both states moved within an hour of Mr Morrison outlining the three-step “road back” to reopen Australia agreed at Friday’s National Cabinet meeting.

In the first phase, public gatherings of up to 10 people will be allowed, while cafes, restaurants and shops will reopen. The second step allows bigger gatherings, and larger venues to reopen.

The third step – which Mr Morrison said he hoped would be complete by July – is still to be clarified. But it will allow gatherings of up to 100 people, and might include interstate travel.

States and territories will drive each step, and when it will start. National Cabinet will review the phases every three weeks.

Treasury modelling shows the three-step plan will allow 850,000 Australians to return to jobs by July.

“Success is not being able to stand up every day and say there’s three cases or 12 cases or 18 cases, not when you’ve got a million people out of work,” Mr Morrison said.

“That’s not success … this plan takes us a long way back, but not all the way back.”

“Whilst I welcome the overall pathway, I also welcome the commentary from the Prime Minister and the decision of National Cabinet that what is done and when … is fundamentally a matter for individual states and territories,” he said shortly after Mr Morrison’s announcement.

Victoria had 13 new coronavirus cases on Friday – eight of them linked to the cluster at a Melbourne abattoir that has grown to 71 infections.

But he said he planned announcements on Monday – when Victoria’s state of emergency ends – and throughout next week.

“They’re there for your safety. And the safety of your family, and every Victorian family.”

He also maintained his stance that Victorian students should not return to classrooms this term.

“Plan for the whole of term two being at home, unless you can’t be,” he said.

“But if we could bring it forward, we would. I’ll have more to say about that next week.”

The state would use data gathered from extensive coronavirus testing during May to plan any further easing of restrictions “in a good and solid way so we continue to gain ground in fighting the virus and we don’t lose ground”, she said.

NSW has already eased some virus measures, including allowing families to visit other households from this weekend.

“Any decisions that come out of National Cabinet won’t be applied in NSW over the weekend,” Ms Berejiklian said ahead of Friday’s meeting.

Western Australian Premier Mark McGowan was up early on Friday, to announce his intentions ahead of the National Cabinet meeting.

WA, which had a new coronavirus infection Friday after days with none, has already eased limits on some gatherings and reopened its schools. On Thursday, it had 75 per cent of students back in classrooms.

“We think it is going extremely well,” Mr McGowan said.

“The changes we have already made were sensible, reasonable, and safe.”

Initial amendments focused on social aspects of the coronavirus measures. Mr McGowan said the next focus was likely to be on kickstarting the state’s economy – although its borders will remain shut.

He will reveal more details on Sunday.

Some Tasmanian students will be able to return to classrooms by the end of May under the Premier’s plan to roll back the state’s tight coronavirus pandemic restrictions.

Premier Peter Gutwein confirmed the number of people allowed to attend funerals to increase from 10 to 20.

Visits to aged-care facilities will be eased, allowing no more than two visitors to visit once per week.

The Premier said the planned three-phase easing of restrictions will be subject to advice.

Primary school students and Year 11 and 12 students at extension schools and colleges will and will return to the classroom from May 25.

High school students in years seven to 10 will go back to classrooms from June 9.

From May 18 public gatherings will increase to 10 people except for households, which is capped at five people.

Restaurants and cafes will be able to open on May 18 to seat up to 10 people at a time for table service only with social distancing.

Border controls will remain in place, except Tasmanian residents will be allowed to quarantine in the residence if they are suitable.

People from interstate will still need to quarantine in government-approved facilities.

With an eye to the coming Mother’s Day, the ACT will implement its changes from 11.59pm on Friday.

Chief Minister Andrew Barr this afternoon announced gatherings will be restricted to 10 people — and, in a deviation from other states, that will include at-home hangouts, too.

Weddings can now have 10 people in attendance, and funerals can have 20 inside or 30 outside.

Churches may resume small services, boot camps can run in the park, and open houses and auctions can start again, too. All must observe the 10-person limit rule.

While the limits on outdoor gatherings are being relaxed, dining at restaurants and cafes will not restart immediately.

The territory has been focused on limiting group numbers rather than policing why people have left the home.

The Northern Territory, where there is no limit on the number of people you can see, has moved fastest to lift restrictions

There are currently no fines for leaving the house for non-essential reasons, however unnecessary socialisation is discouraged.