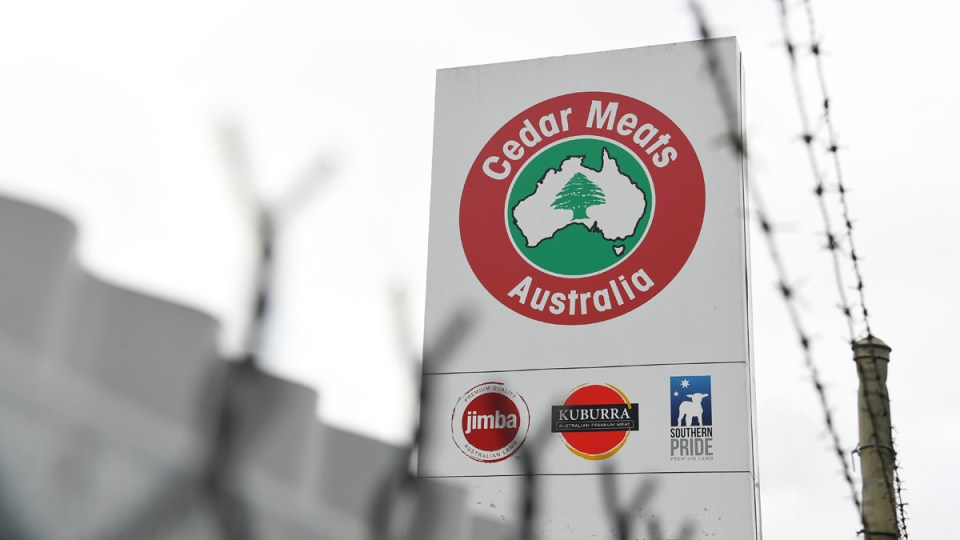 The coronavirus cluster at Melbourne's Cedar Meats has grown to 111 infections.

Victoria reported 14 more coronavirus cases on Thursday, 13 of them linked to a growing cluster in a Melbourne meat works.

The outbreak at Cedar Meats, in Melbourne’s west, had grown to 62 COVID-19 infections by Thursday morning, some of them in the wider community.

On Thursday, Premier Daniel Andrews said seven of the new abattoir cases were in employees, the remainder were close contacts of workers.

Among the earlier cases linked to the meat works is a nurse at Sunshine Hospital, also in Melbourne’s west. She was exposed to a Cedar Meats worker who later tested positive to the virus on April 26.

That was weeks after the first case of positive test in a Cedar Meats employee, on April 2.

That worker told health officials they hadn’t been a work while infectious, so the meat works was not considered an exposure site.

The Sunshine Hospital nurse in her 60s treated the worker over three shifts and was not required to wear protective equipment until the third, The Australian reports.

Another 24 workers at the hospital remain in quarantine.

“No other staff members have tested positive at this time as a result of that exposure,” Western Health said on Wednesday.

A worker at Doutta Galla Aged Care in nearby Footscray, who was in close contact with an abattoir worker, was also confirmed as positive on Wednesday.

“There is not an outbreak nor a COVID-19 cluster, and no resident or staff are showing signs of infection,” Doutta Galla Aged Services said.

The home is closed to all visitors until at least May 11.

The state government argued it had managed the outbreak “perfectly”.

“This is such an infectious disease, it travels so rapidly,” Mr Andrews said.

“I am very proud of the public health team in the response that they have provided to every positive case – and this outbreak was singled out by Brendan Murphy, the chief medical officer of the Commonwealth, at National Cabinet as a model example of how to deal with an outbreak.”

It’s not believed to be connected to the Cedar Meats outbreak.

Federal Agriculture Minister David Littleproud has taken issue with his department not being notified of the Cedar Meats cases until April 30, despite permanent meat inspectors and those that move between abattoirs being on site in March and April.

He said Victorian officials should have told his department as soon as they knew, but stressed he was “not looking for any recriminations”.

“In these fluid times, we need to all be mature enough to say we can always do things better,” he told 3AW.

Cedar Meats is closed and Professor Sutton expected that to bring the outbreak to a head, after more cases emerge in the next fortnight.

He said the outbreak proved the fight against the virus was far from over, but showed hope of Victoria relaxing measures after May 11.

The Ruby Princess virus cluster is linked to more than 20 deaths and 600 infections across Australia.