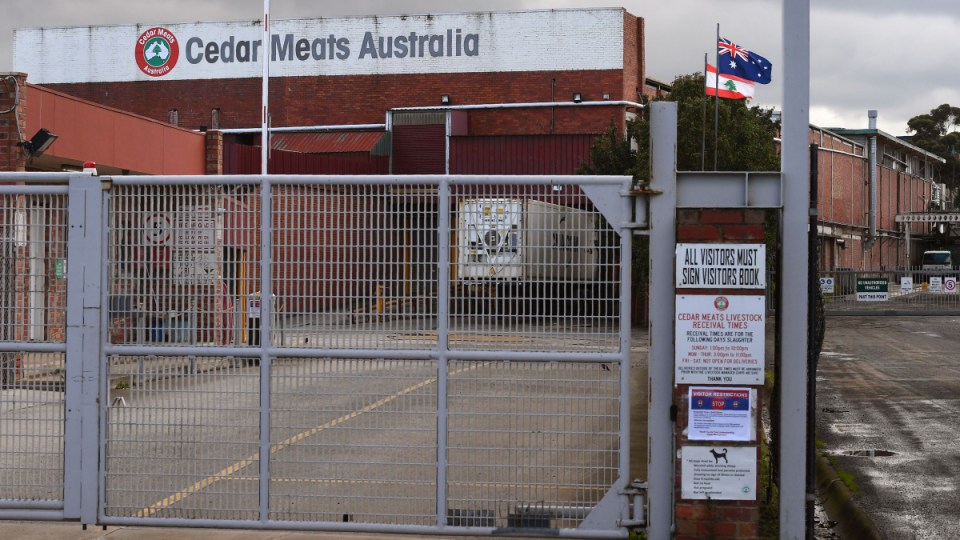 The first coronavirus case was reported at the Melbourne meat works on April 2. There are now 49 infections. Photo: Getty

A Melbourne abattoir at the epicentre of a growing cluster of coronavirus cases in Victoria recorded its first case more than a month ago.

Victoria diagnosed four more cases at the Cedar Meats plant in Brooklyn, in Melbourne’s west, on Wednesday, bringing to 49 the number linked to the works.

They are among 17 new cases reported statewide in the 24-hour period.

Chief health officer Brett Sutton said he was confident the meat works outbreak had not stemmed from a worker who tested positive for the virus early in April, weeks before hundreds of other abattoir staff were tested.

The employee who tested positive on April 2 told the Department of Health and Human Services they had not been at work at any time when they could have potentially infected others.

“I have been told that that early case wasn’t part of the cluster – wasn’t on site,” Professor Sutton told 3AW on Wednesday.

The second case linked to Cedar Meats was diagnosed on April 24, followed by a third case about 24 hours later of a person who had been a patient at Sunshine Hospital for unrelated reasons prior to diagnosis or displaying symptoms.

A healthcare worker became infected through the worker’s Sunshine Hospital visit. Others have been quarantined.

It wasn’t until April 29 that the department took additional actions, including testing all Cedar Meats staff.

Professor Sutton said while the early cases linked to the cluster were known, it was not clear exactly how the outbreak emerged.

“People can have really mild symptoms and we’ll really struggle to understand who introduced it and when, but somebody’s brought it into the facility,” he said.

Reports the worker confirmed as infected on April 2 had actually been on site were “a rumour”, Professor Sutton said, but could be checked if needed.

The latest four cases at Cedar Meats were part of 17 new cases recorded in Victoria on Wednesday.

Seven others are returned overseas travellers who are in mandatory hotel quarantine. Six cases remain under investigation.

Eight people remain in hospital with the coronavirus, including six in intensive care.

Treasurer Tim Pallas confirmed on Wednesday it would redeploy about 3000 casual public sector workers who have lost their jobs but are ineligible for the federal government’s JobKeeper program, into agencies of high demand.

A day earlier he revealed an extra $491 million in virus relief measures.

Social distancing measures will remain in Victoria until at least May 11, when a state of emergency ends. Professor Sutton said he expected some relaxation of restrictions from then.

“There will be some easing, I have no doubt,” he told 3AW.

National Cabinet will meet on Friday to discuss guidelines to relax measures.

Abattoir cluster: Coronavirus has spread for weeks at works