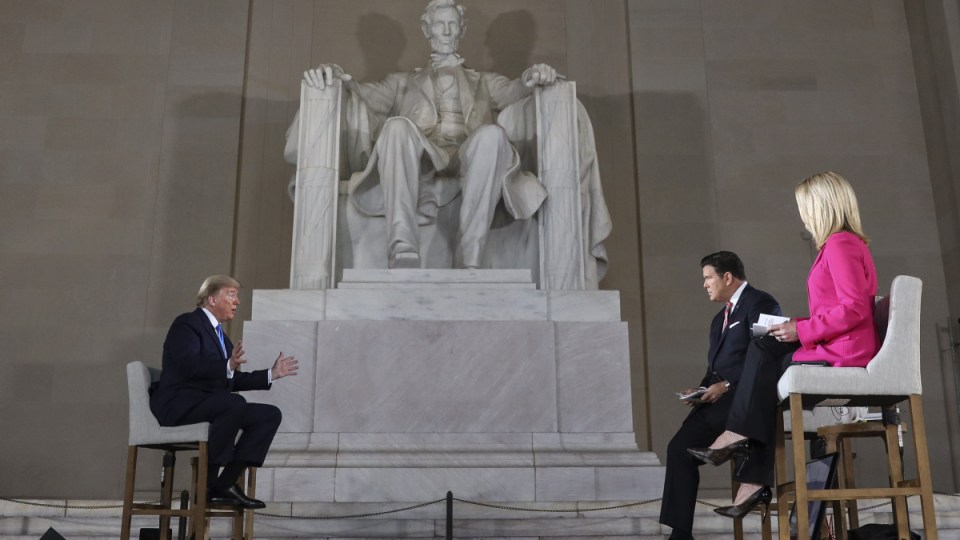 Donald Trump at the interview, which was held at the Lincoln Memorial. Photo: Getty

President Donald Trump now predicts the US might suffer up to 100,000 deaths from the coronavirus, but alternative modelling, and a leaked document from within his own administration, suggests he is still understating the threat.

Mr Trump revised his earlier estimate of 60,000 deaths – which the US reached last week – during a virtual town hall meeting hosted by Fox News in Washington DC on Sunday.

“That’s a horrible thing, we shouldn’t lose one person over this.”

However, modelling released on Tuesday (Australian time) by the Institute for Health Metrics and Evaluation, an independent research centre at the University of Washington, predicts nearly 135,000 people will die of COVID-19 in the US by August 4.

The organisation said the higher prediction was due to increased movement in most parts of the country – driven in part by public protests – with social distancing restrictions expected to ease in 31 of 50 states.

“In each state, the evolution of the epidemic depends on the balance between relaxed social distancing, increasing temperature, and rising rates of testing and contact tracing,” IHME director Dr Christopher Murray said.

“We expect that the epidemic in many states will now extend through the summer.”

Still, the problem could yet be far worse. A reportedly-leaked document from the Centres for Disease Control and Prevention, which reports to the Trump administration, suggests deaths from coronavirus in the US could reach 3000 a day in June.

As reported by The New York Times, the document predicts a significant and alarming increase in the number of coronavirus cases and deaths the country could soon face.

The New York Times reported the White House said it had not vetted the document, and the figures were not endorsed.