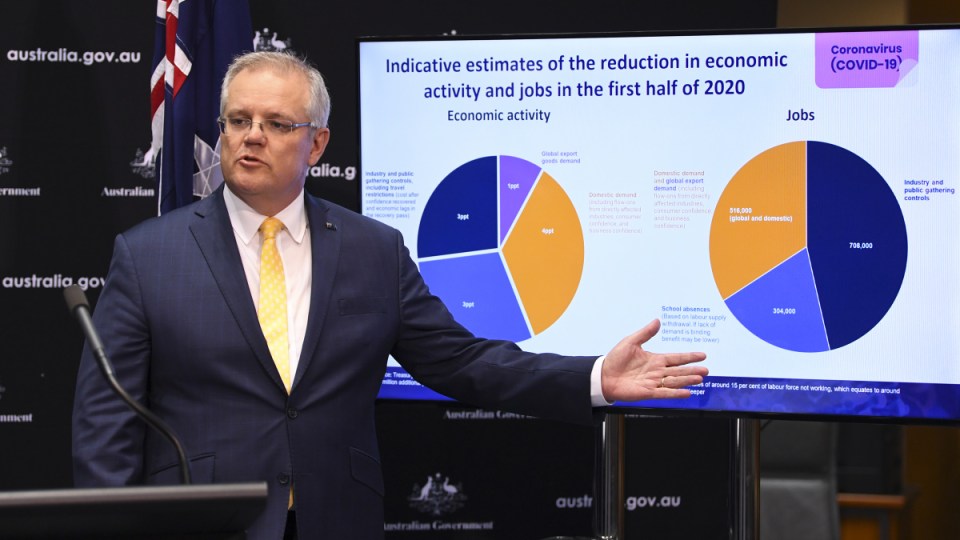 Prime Minister Scott Morrison says Australia needs to get one million people back to work – but workplaces must first be COVID-safe.

“Thousands of Australian lives have been saved, when you look the experience of how COVID-19 has affected so many countries around the world. But we now need to get one million Australians back to work – that is the curve we need to address,” he said after Tuesday’s National Cabinet meeting.

“We are trying to find what that safe economy looks like, so we can move towards that.”

It came as Australian Bureau of Statistics data found up to a million Australians had lost their jobs since social distancing measures were imposed.

Mr Morrison said more than a million Australians would have had JobSeeker claims processed by the end of Tuesday, with a further five million people on the JobKeeper wage subsidy.

On top of that, a million people have applied for early access to almost $10 billion in superannuation.

“It certainly puts enormous pressure, as it should, on the timetable as we seek to move Australia back to that safe economy because of those significant costs,” he said.

“As we plan our way back in getting a million Australians back to work, those costs are expressed in so many different ways.”

The combined economic fallout from the coronavirus is expected to be an 11 per cent hit to the country’s gross domestic product.

“The National Cabinet is not in any way unaware of the serious
implications of the decisions we have had to take, now over many months, and that is why we are not seeking to delay any time at all in terms of trying to get things moving again,” Mr Morrison said.

But he said it was essential that employees returned to safe workplaces, as outbreaks of the coronavirus were to be expected as regulations eased.

Businesses are being urged to take basic steps, such as using personal protective equipment, taking extra hygiene and cleaning measures, and reconfiguring worksites.

It is expected to have five million downloads by the end of Tuesday.

COVID-19 commission chairman Neville Power what exactly would be needed was “very much a business by business proposition”.

“It’s really important also, if we do have outbreaks in the economy, in the community, that we are able to deal with those directly without
needing to go back and introduce further restrictions,” he said.

“We want to make sure we are able to deal with those quickly – that’s been our guidance to business, is to make sure this is a progressive, disciplined and well-organised change in those restrictions.”

Mr Morrison said he expected to have more details later in the week on possible timeframes for easing restrictions.

Mr Morrison said the idea was “part of the road back”.

“At some point, both Australia and New Zealand will have to connect with the rest of the world again; the most obvious place for that to start is between the two countries,” he said.

“But it’s not something about to happen next week.

“It is something that will better sit alongside when we are seeing Australians travel from Melbourne to Cairns.

“At about that time I would expect, everything being equal, we would be able to fly from Melbourne to Auckland or Christchurch.”

‘Enormous pressure’ to get one million Australians back to work: Morrison