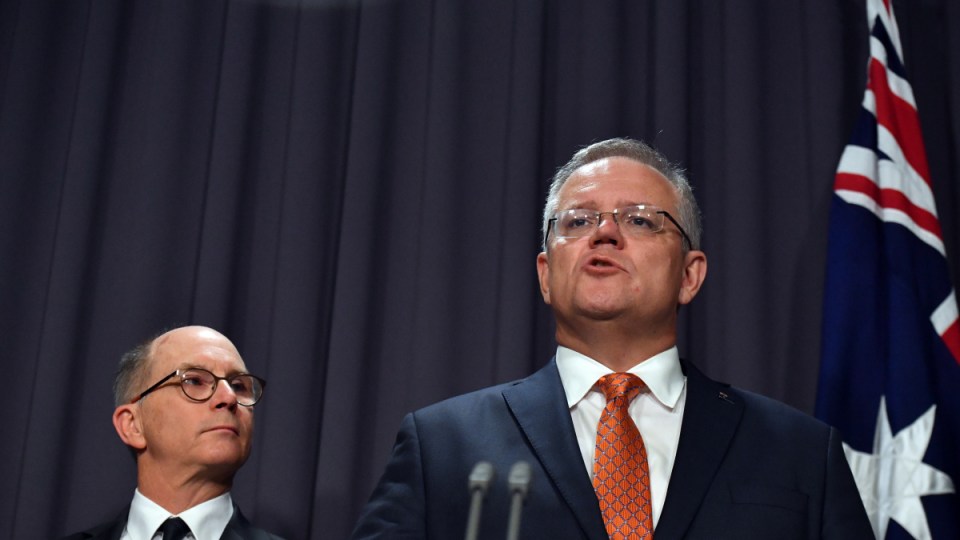 Germany is the latest to be hit with a rise in cases after experimenting with a relaxation of shutdowns amid fears Europe could face a deadly resurgence.

Singapore, which had initially been praised for seemingly quashing the virus, has since had a five-fold increase in infections to more than 15,000 – largely in its migrant dormitories – rising to the third highest in Asia behind China and India.

As Prime Minister Scott Morrison warned that “of course, there will be outbreaks” in Australia, he flagged potentially lifting some social and economic clamps.

Deputy Chief Medical Officer Paul Kelly said if outbreaks did occur under relaxed restrictions, Australia would have a detailed response to deal with the disease.

“If a second wave does occur, we’ll deal with it quickly and we’ll respond to it,” he said.

Professor Kelly said it was likely rules would be eased in the lead-up to May 11, a key date for reviewing bigger restrictions.

“There will be many announcements about changes in the way we’ll be living our lives and hopefully getting back to some sort of new normality in living in a COVID-19-safe society,” he said.

The national cabinet and state and territories are due to meet in mid-May to reassess Australia’s lockdown measures as some states already loosen the rules.

From midnight Friday, Queenslanders will be allowed to travel within a 50km radius from home as well as picnic, go driving, hit the water and hike reopened trails – while maintaining gathering limits and social distancing rules.

Also from Friday, NSW households will be allowed two adult visitors with no limit on how far people can travel to ‘care’ for a loved one.

Mr Morrison is adamant Australia can lift restrictions in a safe way.

Testing, contract tracing and quick, effective responses to outbreaks are considered key benchmarks in edging back towards normal life.

“Of course, there will be outbreaks. That is what living with the virus will be like,” he said.

“That is why the protections that we put in place for a COVID-safe Australia are so important.”

Mr Morrison said the COVIDSafe tracing app, which has been downloaded by almost three million Australians, was one ticket to freedom.

There are 10 million new testing kits set to flood into Australia, giving authorities scope to screen people in a targeted but more widespread way.

Newmarch residents fear for their lives

Anglicare’s chief executive has warned there could be more deaths at Sydney’s Newmarch House after its toll rose to 12.

About 80 residents are still living at the home near Penrith and families  have raised concerns about the quality of care.

The latest death on Wednesday was the sixth in three days at the facility where residents have been isolated since April 11.

Family members have written to chief executive Grant Millard stating their calls have not been returned, details about loved ones have not been regularly divulged, and residents have reported inadequate care.

NSW Premier Gladys Berejiklian said the situation was “distressing” and urged the operator to lift its game.

“It’s not acceptable to keep people in the dark. Just put yourself in the shoes of those people – it’s horrific to be fearful about firstly, potentially losing a loved one but then not knowing what’s going on and not being able to offer that care,” she said.

Freedom on horizon amid low infections

Australia has continued its trajectory towards squashing the coronavirus with only one new case on Wednesday due to an unknown, community transmission.

A total of 6746 cases have been recorded in Australia on Thursday morning and the death toll is 90 – NSW 42, Victoria 18, Tasmania 11, WA eight, Queensland four, SA four, ACT three.

The government says Australia’s borders won’t reopen for at least three to four months, although some states have started easing restrictions.

In NSW from Friday, households will be allowed two adult visitors, and their children, to their home.

“We haven’t put a limit on how far you can travel in order to visit a loved one but we ask everybody to be responsible – this is not a holiday,”  said Premier Gladys Berejiklian.

Ms Berejiklian has emphasised lifting restrictions on house visits was solely an extension of the definition of “care” and current rules remained in place, including strict limits on the size of indoor and outdoor gatherings.

She says particular care should be taken when visiting the elderly or already ill, and those aged over 70 should continue to remain at home as much as possible.

“We don’t want to see families unnecessarily go through that grief, so please have those conversations with your families,” Ms Berejiklian said.

In Western Australia, up to 10 people are now able to gather for non-contact recreational activities and outdoor personal training while open homes and display villages will also be permitted.

In Queensland, some stay-at-home restrictions will be eased this weekend, allowing people to travel 50 kilometres from their residence to visit parks, have picnics and jet ski.

Shopping for non-essential items will also be permitted.

The Northern Territory plans to reopen parks and reserves this weekend.

Victoria and South Australia are the holdouts, with no plans to lift restrictions until May 11 at the earliest.