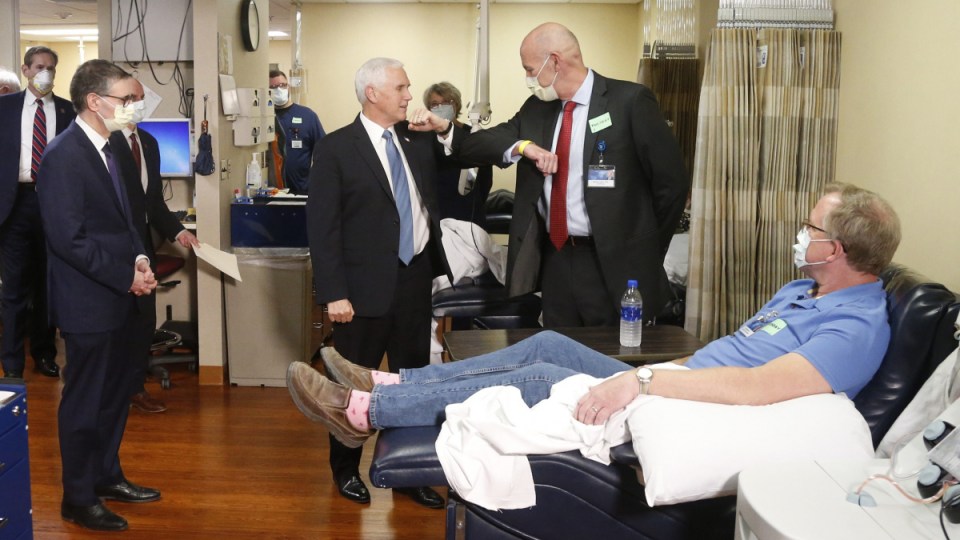 US Vice-President Mike Pence has responded to criticism after failing to wear a face mask while on a visit to a medical centre.

As Mr Pence attended a clinic on Tuesday (local time) and spoke to a COVID-19 survivor, he was the only person in the room not sporting a facial covering.

While the guidance from the Centres for Disease Control and Prevention is that Americans should wear face masks in public to avoid spreading COVID-19, Mr Pence refused to wear one while meeting doctors and patients at the Mayo Clinic in Minnesota – on the same day President Donald Trump mocked a man for wearing a mask at the White House.

Mr Pence was reportedly told of the new rules before he visited, the clinic said on Twitter, in a post that was subsequently deleted.

“Mayo Clinic had informed @VP of the masking policy prior to his arrival today,” it wrote.

Retweeting this deleted tweet. I wear a mask when I’m out and around people. Still manage to communicate with them just fine. 😷 @MayoClinic @VP pic.twitter.com/1Dsm1N6w70

But as he visited a blood and plasma donation centre inside the building, Mr Pence was bare-faced.

Others in the room – including Dr Stephen Hahn, the Food and Drug Administration head – wore coverings.

Pence showed up to the Mayo Clinic.

He’s the only person ignoring their mask regulations.

At a medical center. pic.twitter.com/zN83TMcYv2

Mr Pence responded to criticisms, saying he complied with federal guidelines and felt it was his duty to speak to workers at the clinic without a facial covering.

“Since I don’t have the coronavirus, I thought it’d be a good opportunity for me to be here, to be able to speak to these researchers these incredible health care personnel and look them in the eye and say thank you,” he said.

Mr Pence did avoid shaking hands; he elbow-bumped instead with doctors and officials.

Mr Trump has not publicly worn face masks during press briefings and other events, saying earlier this month: “I just don’t want to wear one myself. It’s a recommendation. They recommend it.”

“I don’t know. Somehow, I don’t see it for myself,” Mr Trump said at a coronavirus task force briefing in early April.