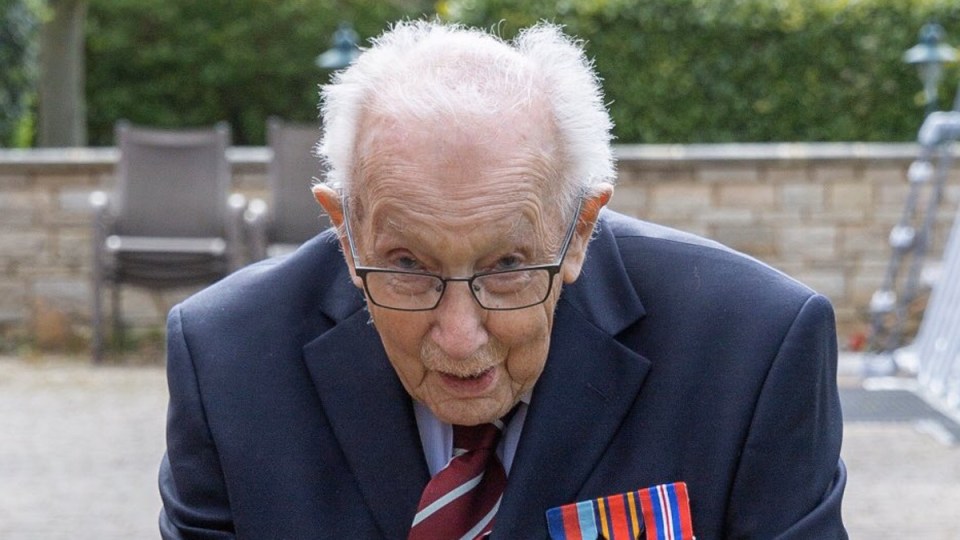 Captain Tom Moore has raised more than $56 million for the NHS.

A World War II veteran who has raised more than £29 million ($56 million) for the UK’s National Health Service is to have his 100th birthday celebrated in a fashion fit for royalty.

Captain Tom Moore, who raised the money by walking 100 laps of his garden, will be honoured with a Royal Air Force fly-past when he celebrates his birthday on Thursday (local time).

Captain Moore sauntered past his modest goal of £1000 ($1943), completing the laps about two weeks before his birthday with the help of his walking frame and millions of supporters.

Attracting a global audience who were transfixed by his progress, Captain Moore became the surprise focal point for a deluge of donations to the state-funded healthcare system, which is at the forefront of the battle against the deadly coronavirus outbreak.

The indefatigable Captain Moore followed up by becoming the oldest artist to claim a UK No.1 single, with a cover version of You’ll Never Walk Alone, which raised even more money for the NHS.

The aerial tribute was confirmed by British Transport Secretary Grant Shapps, following reports a separate fly-past by a privately owned restored Spitfire had been cancelled by the Department for Transport as “inessential”.

The Battle of Britain flight includes six Spitfires, as well as other World War II-era aircraft.

Mr Shapps said the RAF flight was meant to be a surprise, and it was a “pity” that details had been reported.

Unfortunately this story is completely misleading as will become apparent on Thursday https://t.co/wRhzhFeEEK

The brilliant, inspiring Capt Tom Moore WILL be honoured on his birthday and in an even more significant way!

The Ministry of Defence has urged the public “to follow Captain Tom’s disciplined example and not gather to watch the fly-past but continue following guidelines on social distancing”.

Coronavirus has so far responsible for more than 21,000 deaths in the country.

The Queen cancelled the traditional gun salute for her 94th birthday last week, for the first time in her 68-year reign, deeming it inappropriate during the pandemic.

Captain Moore has been sent 125,000 birthday cards after beating the Guinness world record for a charity walk.

He said he undertook the walk to say “thank you” for the NHS treatment he received after he broke his hip and was treated for cancer.

Bedford School in central England, near Captain Moore’s home, took on the task of opening and displaying the cards.

“It’s the most amazing outpouring of love for a great man,” said headmaster James Hodgson.

The floor of the school hall is a sea of goodwill messages, carefully curated by volunteers who have spent hours reading them over the past week.

Even as more arrive every day, Mr Hodgson said the plan was to display as many as possible and send Captain Moore a photograph of the results.

A hand-drawn card from 11-year-old Rebekah in South Wales read: “To My Hero! Thank you for all you have done. You will help a lot of people with the money you have raised xx”