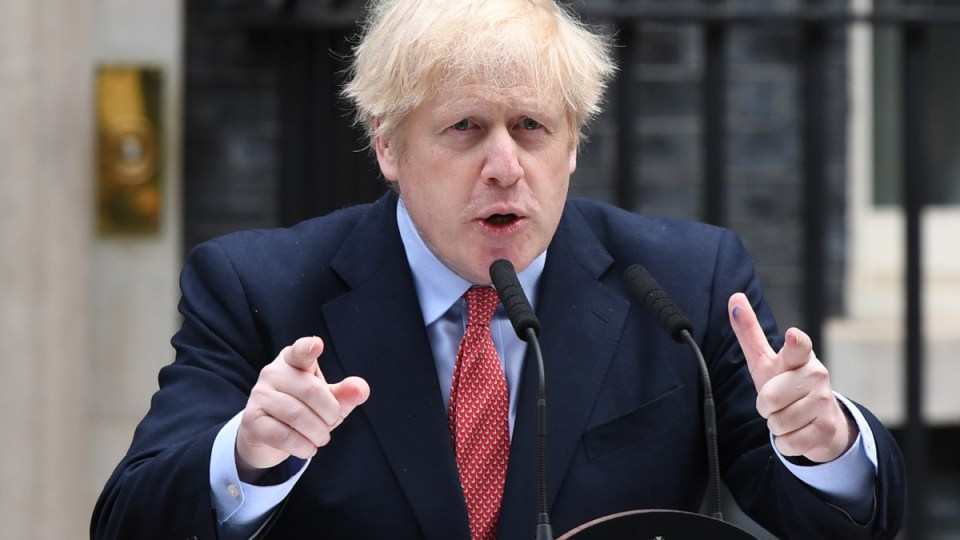 Boris Johnson is offering positive news to the UK public despite having one of Europe's highest death tolls. Photo: Getty

Four weeks after contracting the coronavirus, British PM Boris Johnson is back at work and has warned against easing social distancing measures too early, fearing a deadly second outbreak.

“If we can show the same spirit of unity and determination as we’ve all shown in the past six weeks then I have absolutely no doubt that we will beat it,” the 55-year-old said, standing behind a podium outside his Downing Street home, for the first time in a month and a day since he tested positive.

“We must also recognise the risk of a second spike, the risk of losing control of that virus and letting the reproduction rate go back over one because that would mean not only a new wave of death and disease but also an economic disaster.

“If this virus were a physical assailant, an unexpected and invisible mugger, which I can tell you from personal experience, it is, then this is the moment when we have begun together to wrestle it to the floor.

“I ask you to contain your impatience because I believe we are coming now to the end of the first phase of this conflict and in spite of all the suffering we have so nearly succeeded,” he said.

After battling the disease at home for several days, Mr Johnson was admitted to St Thomas’s Hospital on April 5. He spent three days in ICU.

After deputising for Mr Johnson during his illness, foreign secretary Dominic Raab said on Monday (local time) the Prime Minister was “raring to go” and was expected to chair a meeting of the government’s COVID-19 war cabinet.

“We need to make sure that the next steps are sure-footed, which is why we are proceeding very cautiously and we are sticking to the scientific advice,” Mr Raab told Sky News on Sunday.

Britain has suffered one of the world’s highest death tolls from the coronavirus, recording 21,157 hospital deaths. There are thought to be thousands more yet to be quantified in care homes.

Mr Johnson stressed it was still a time of maximum risk, even as 158,348 British citizens have contracted the virus.

With unemployment soaring, many companies crippled and a recession looming, Mr Johnson said he understood the concerns of business and would consult with opposition parties who wanted details of how to end the country’s lockdown.

“We simply cannot spell out now how fast or slow or even when those changes will be made, though clearly the government will be saying much more about this in the coming days,” he said.

Finance minister Rishi Sunak announced the latest in a series of emergency measures to try to stave off calamity, a program of small business loans fully backed by the state.

He said the government would stand fully behind commercial loans of up to £50,000 ($A96,080) for emergency credit to small companies, which will not have to make repayments or pay interest for 12 months.

Mr Johnson’s spokesman said on Monday that the Prime Minister would meet opposition Labour Party leader Keir Starmer, who has urged him to release more information about when and how restrictions might be eased.