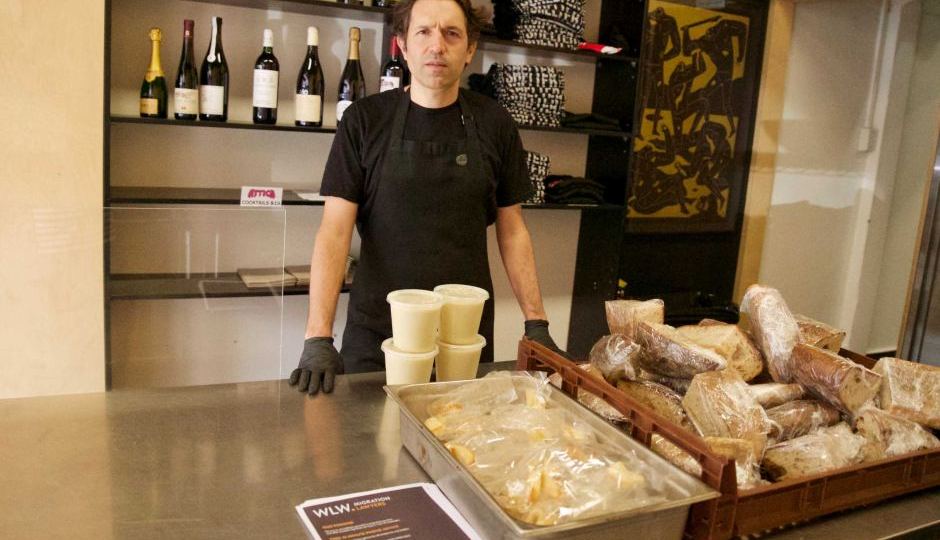 Like all restaurants, Attica in the small Melbourne suburb of Ripponlea is only doing takeaway right now.

But this week, owner and head chef Ben Shewry was doing something different.

The soup is for the needy: in this case, international hospitality workers who have lost their jobs due to the COIVD-19 pandemic but are ineligible for the Federal Government’s JobKeeper and JobSeeker programs.

A large proportion of the 840,000 temporary visa holders with working rights in Australia are employed in hospitality and tourism, industries which find it difficult to train and retain enough staff.

“They were invited here. They were allowed here or welcomed here and now when things got a little bit tough it feels like we’re turning our backs on them,” he says.

“That doesn’t feel very Australian to me.”

About half of Attica’s staff fall into the visa worker category and he says without them, the restaurant wouldn’t be able to function when coronavirus restrictions are eventually lifted.

This applies to businesses right across the country, which are so reliant on overseas workers they may collapse even when the crisis is over due to lack of staff.

Restaurants in outer suburban and regional areas where staff are always harder to find will be especially vulnerable.

Her language is colourful in regard to the Government’s suggestion that international workers should simply “go home”.

“That is not an answer.”

Her businesses employ many Vietnamese students who she says are “heartbroken” about the way they’re being treated, but beyond that, she says the industry could not restart if staff left the country.

“How do we reboot everything?” she asks.

“If everybody went home, if even 50 to 60 per cent went home, I don’t think half the restaurants would be able to re-open.”

She says suburban and regional restaurants are always harder to staff because “hospitality is so short already.”

With plans to slowly ramp up her Pho Nom outlets in the city, she says that most of her staff are not eligible for the JobKeeper subsidy.

That means she will foot the salary bill herself during a slow recovery period and will, therefore, operate with only half the usual number of staff.

“We can’t have all the staff that we normally do,” she says.

“I would be broke the very next day.”

There’s developing concern that international workers will be the last to get their jobs back when distancing restrictions are eventually lifted because their salaries won’t be subsidised under the JobKeeper program, unlike their Australian colleagues.

For the moment, Attica is still fully staffed doing takeaway and is diverting $5 from each order to its Soup Project, in which international workers who have lost their jobs come and collect a tub of nourishing soup and freshly made bread as they try to make it through the crisis.

It’s a collaboration with food critic Dani Valent, who has also lost most of her work due to the pandemic but has become a kind of unofficial activist.

A petition that she started to get them some government support has almost 45,000 signatures and a mailing list she set up to provide information to international workers saw more than 1,000 people sign up in one day.

“But I know that they’ve felt grateful to have the information sorted out for them and to have someone they can see cares.”

The Soup Project is just one of several initiatives the industry has launched to support its own staff through the crisis.

“They’re not just backpacking here for a few months, here for some beer and some beach time. They’re really integral to the way Australia runs,” Ms Valent says.

“A lot of them are on a completely legitimate path to permanent residency which has cost them and sometimes their employers thousands of dollars, so they’ve invested in their future in Australia.”

Keline from France is one such case. After living in Melbourne for six years, she moved to Hobart on a skilled worker visa to take up a role as a restaurant manager.

Now out of work, she’s unclear what the implications are for her permanent residency application.

Lack of clear advice and communication

Lewis Cooke, 28, from the UK was working at a new cocktail bar in Melbourne’s CBD which is now in hibernation.

His girlfriend is an essential worker — a nurse — who is now supporting both of them.

He says he’d love to go home and give his mum a hug but returning “home” isn’t practical.

“I’m not stood here being like, ‘I want things and expect things’,” he says.

“There are certain people that need taking care of first, but it doesn’t mean you should leave anyone in the dark and that’s how I kind of feel.”

Lack of communication and clear advice from state and federal governments is a common theme among the workers.

Liv Reburn from North Carolina is here on a partner visa and has no real home to return to in the United States.

The uncertainty is weighing on her as she uses her savings to survive and considers dipping into superannuation.

She collects her soup parcel reluctantly but with gratitude.

“To be honest, it can be hard to ask for help. It’s not a nice position to be in. I’m really thankful.”