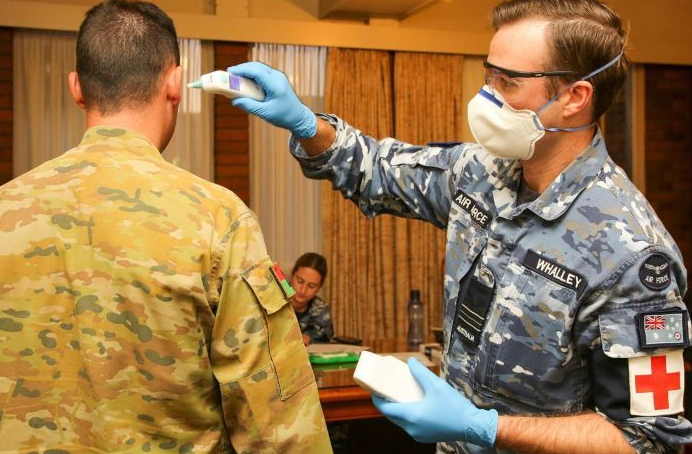 Australia’s coronavirus testing regime could be expanded to a “sentinel surveillance” system, including places and people that are seemingly virus-free.

Deputy Chief Medical Officer Paul Kelly said Australia had now carried out more than 400,000 tests but it was time to actively go into the community to do more.

The switch to a sentinel surveillance program would offer tests to at-risk groups, he was quoted as saying by the ABC.

“Which might be doing laboratory testing in places where we don’t know there are cases to see if there, indeed, are some,” he said.

“It will lead us to consider what we would do in the case of outbreaks in high-risk settings.”

As of Sunday morning, 6547 cases of COVID-19 had been identified across Australia, with the tally of deaths stood at 70. Some 4124 cases are listed as recovered.

Professor Kelly said the plan was discussed at a meeting on Sunday with the state and territory chief health officers after the group was asked to consider how testing could be expanded by National Cabinet.

“I know in other countries they have done testing of supermarket employees, for example,” he said.

“People that are at risk insofar as they have close contact with many people during the day.”

In other coronavirus developments South Australia recorded a 24-hour period without recording any new COVID-19 infections, capping a remarkable decline in numbers over the past week.

What makes the flattened curve even more notable is that testing protocols have been greatly expanded – a move that should have produced an upsurge of cases as the number of those scanned rose to two per cent of the state’s population.

“It’s not over yet,” said Dr Nicola Spurrier, the state’s chief medical officer.

“We need to keep our foot down on COVID-19 and make sure we do everything we can as individuals to get rid of it.”

The state’s health authorities can’t rest easy, however, with two planes carrying 800 expats set to arrive in Adelaide on Sunday.

COVID-19 has so far claimed four lives in South Australia, where the recovery rate now stands at 79 per cent. Seven people remain hospitalised, with two in intensive care and one of those listed in a critical condition.

The passengers arriving on Sunday will all be placed in quarantine for 14 days.

Premier Steven Marshall said the flights to get stranded Australians back to South Australia was part of a coordinated effort with other states and territories across the country.

“All operational measures have been put in place to enforce the returning citizens’ 14-day quarantine period and ultimately keep South Australia safe and strong,” he said.

In Tasmania the news isn’t so good. A man who was a patient at a hospital at the centre of a coronavirus outbreak has died, becoming the second death in two days.

The 74-year-old was a patient at the North West Regional Hospital (NWRH) in Burnie, which was closed after becoming the centre of a coronavirus outbreak.

On Friday, a 72-year-old man died from coronavirus in the Mersey Community Hospital at Latrobe, also in the state’s north-west.

Three healthcare workers from the NWHR and the co-located North West Private Hospital are among four new cases of coronavirus.

The other is a close contact of a confirmed case. The state’s total tally of known infections is 188.

COVID-19 isn’t only a health battle – it is also spawning fresh lawsuits, the latest lodged in the US by the family of a 64-year-old Ruby Princess passenger who died in hospital on April 4 after returning to the US.

Mr Chung Chen’s wife and daughter, who survived their own infections, are demanding $1 million-plus, alleging gross negligence on the part of Carnival Cruise Lines.

They accuse Carnival of keeping passengers waiting to board for six hours while the vessel was subjected to a bow-to-stern disinfecting process for which no explanation was offered.

Some 200 crew and passengers subsequently tested positive, of which 21 have died.

“They sailed on March 8th knowing there was a great risk of exposing their passengers to a deadly virus,” the family’s lawyer, Debi Chalik, told reporters.

“You go on a dream vacation and you don’t expect to come home ill and then lose your husband and father.”